For my son's 6th birthday, we decided to do an Airplane Party.  He is really into airplanes and airports, so this was really fun for both of us to plan.  I got a lot of inspiration from this website, so it was really easy.

The invitations were a big hit--they looked like boarding passes for a flight on "Tommy Airlines!"  We had all the information you would need to board a real flight, including passenger name, flight number, seat number, flight time, and departure time.  I got so many compliments on these.  On the back, I included "This ticket is non-transferrable.  Passengers are allowed one carry-on parent, if desired.  Please confirm your flight with the Tommy Airlines ticket agent by calling 763-xxx-xxxx.  Your flight will depart from gate 6 at the Smith Terminal, which is located at (our address).  Some parents even RSVP'd in a very official manner by saying they were confirming their child's flight, and never let on that they were RSVPing--very cute!  The best part of the invitation for me was the custom logo for "Tommy Airlines" I was able to create.  I used this logo on the return address for the envelopes (air mail envelopes, of course) and other documents.

Most of the children brought their boarding passes to the party, so my son was seated at the "check-in" counter at our doorway.  He checked them in by stamping their tickets with a hole punch, then directing them to "baggage claim" for the gifts.  We made lots of signs out of poster board and stencils that read "Check-In," "Baggage Claim," "Gate 6," etc.  We also had a huge mylar ballon that looked like a Northwest Airlines jet.  It was so big it had to have three ribbons anchoring it down--so cool!  All the kids and parents commented on it when they came in.

We also had a ton of helium-filled latex balloons in blue and white to match the theme of the party.  Each child received a name tag which was homemade with some foam paper.  Each one was custom-decorated by my little boy and was shaped like an airplane.  They then went down to the family room where we had most of the decorations.  We went to airshow.com and ordered really cool blow-up airplanes to hang from the ceiling.  They have 747's, blue angels, blackbirds, vintage planes, even space shuttles to choose from.

My husband helped all the boys make and decorate their own gliders--we ordered these from oriental trading.  They had a lot of fun seeing whose glider was the fastest!  After the glider craft project, the boys played "pass the black box," which was actually just a plane cardboard box covered in black paper.  I put the Tommy Airlines logo on it, and filled it with little treasures from the Northwest Airlines company store.  Their local hub is in our hometown, so we were able to buy lots of stickers, mini airplanes, coin pouches, and lots of other little goodies that the boys just loved.  They passed the box around to the music and when the music stopped they chose a prize.  We also did a pinata, which, of course, looked like an airplane.  The boys all put their candy and prizes in blue paper bags I decorated again with the Tommy Airlines logo.

Then is was time for cake.  I just purchased chocolate cupcakes from our local bakery and topped them with some little airplanes I found on Ebay.  We also had "jet fuel punch," which was actually blue kool aid.  Next, we opened presents, which did get a little chaotic, but was fun for the kids.  We had 17 children, and I think next time I would have a smaller party--this might make it a bit easier with gifts.  After gifts, parents started coming for pick up.  Before each child left, we let them pick out one of the blow-up airplanes we had hanging from the ceiling--this, by far, was the best part of the party for many of the boys!  They all left so excited with those airplanes.  And they were not expensive, and by letting the kids take them home, it was like instant decoration clean-up!  My little boy loved his party, and so many of the parents were impressed that all the kids had so much fun at a home party.  So many kids go to the pool or the bowling alley, it was nice to have them come to a home party for a change. 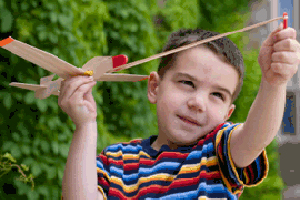