Alphabet Birthday Party: A told B and B told C, I'll meet you at Cicely's 3rd Birthday Party! For my daughter's birthday, we had a long list of friends to invite and I wanted to make it "age appropriate" and fun, so we had an alphabet birthday party and I had an activity for every letter of the alphabet. I used the rhyme from "Chicka Chicka ABC" and told details about the party on the invitation.

We used a fellowship hall at our church (FREE!)and I borrowed many items from friends, the church daycare and of course had many items around the house. My daughter and I started working a month in advance and we made "Alphabet Posters" by cutting out a construction paper letter and then we cut out pictures of words that started with each letter--she really enjoyed helping and it helped her with her letters and sounds too!

We used the following activity centers and put our "Alphabet Poster" at each letter: A-Animal memory game, B-Bubbles and mardi gras Beads (to take home), C-Cars on a small raceway, D-Dress up clothes and a mirror, E-match fun foam letters and an object in Easter Eggs--(S paired with a doll Shoe), F-Fishing with poles using magnets on the end and fish with a paper clip, G-assorted Games like Candyland, Hi-Ho Cherry-Oh, Lucky Ducks, H-Hula Hoops, I-musical Instruments (drum, triangle, play piano, guitar, cymbals),J-Jigsaw puzzles, K-sorting Keys (mis-cuts from hardware store--sort by shape, color, size, etc),L-Legos,M-Magnet wands and fun metal objects (from local teacher store),N-make Necklaces with Fruit Loop cereal and yarn, O-opposites book and removable stickers, P-Play-Doe, Q-Quilt (each child made a hand print on a pre-cut square to be later made into a quilt--parents put child's name, age, and some children drew pictures using fabric paint--squares were put on a clothes line to dry), R-Read books (books in a crate and there was a bean bag and some throw pillows), S-Stamps (rubber stamps, ink pads and paper), T-find the Treasure (extra large shallow box filled with sand and craft store "jewels" or shiny beads inside--drop cloth a must!), U-Umbrellas (we had several kinds and sizes to choose from), V-video (each child was asked upon arrival to go to this one and sing "Happy B-day" or say something for the birthday girl--we showed this later),W-Worms (plastic fishing kind), X-xylophone pipes, Y-Yellow Yarn and scissors to practice cutting, Z-Zoo animals, books and pictures. As a party favor each child was given an ABC book (ours were home made with a Bible verse for each letter, the sounds the letter made--including special sounds and vowels--they used it at the party and the mom wrote something they did at each letter and they took it home and looked for pictures and words to put on each page).

Because this was a hands on activity party, All parents stayed and helped and walked around at their child's pace to each station.

While the lunch was being put out I lead the children in "Follow the ABC Leader" and we made the letters of the alphabet with our bodies, and did a motion or sound for each one (J is for jump--etc)and when we got to V we watched the video they made and finished lunch. We left with "Zipity Do Dah" sing-a-long from Disney. It was great--but definitely required major planning and clean-up. 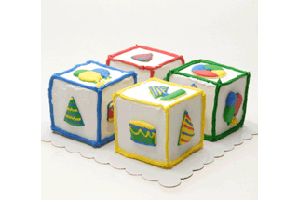