My 9year old daughter had gotten interested in the American Girls Dolls and stories, and asked Grandma for a doll for her present, so we came up with the idea for an American Girl doll party.

The invitations looked like old-fashioned quilts.  We cut 9 squares out of patterned paper with zig-zag scissors, and arranged them on a card to look like a quilt. On the invitation we asked the girls to wear a dress, if they would like to, and also to bring any doll they had at home to share.

All 10 girls came dressed very cute, and the best part was because they were dressed up, they "played the part" by behaving like little ladies!  We tried to keep the party old-fashioned.

The first game was "pass the present."  I had wrapped a prize in as many layers of paper(all recycled from previous holidays) as I had guests, and a few extra to be safe.  While music played, the present was passed around a circle, and when the music stopped, whoever was holding the present got to unwrap a layer.  I tried to make the music stop on a different child each time.  The person to unwrap the last layer got to keep the prize.

Next, we decorated straw doll hats purchased at a craft store for 79 cents.  Girls came to me to have some items glued on with a glue gun.  The girls used feathers, beads, ribbons, sequins, etc to decorate.  Then we sat in a circle and gave out prizes for well-decorated hats-everyone was a winner. Also, each girl had a chance to show off her doll and tell about her.

Then we went to the kitchen for tea in fancy cups, or hot cinnamon chocolate for those who did not like tea.   My daughter does not like cake very much, so we baked roll cookies ahead of time, which I cut in large squares.

On two tables I placed containers of different colored icing and plastic knives, and the girls decorated their own cookies to look like quilt squares.  This was a bigger hit than cake, and they made one to take home.

Our final game was a relay race, where the girls had to run across the room, open a suitcase, put on a skirt, shoes, hat and necklace, then run back, get their photo taken with a Polaroid, then put the items in the suitcase.  Each girl got their photo to take home.

After present opening time, Grandma gave my daughter her American Girl Doll, and the guests were so excited to see her. For party bags, we bought "old-fashioned" items at a $1 store, like jump ropes, yo-yos, candy sticks, and ceramic ring boxes.

The party was really a hit with these girls, who are not used to at-home parties anymore. 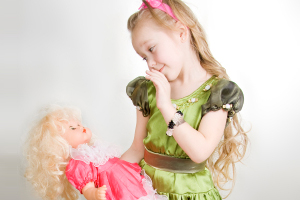