For my son's 8th birthday party we decided on a SHARK theme.  Trying to save costs, we utilized a party room with attached indoor swimming pool at a relative's apartment complex for the location.

THE INVITATIONS: were made on the computer with "PrintMaster" software. The front said "Let's Play with the Sharks" and had graphics of ocean life & sharks and blue & green fonts.  On the inside it said He Started Out Young & Innocent, He wouldn't hurt a flee (above the words were pictures of my son when he was 3 years old - 6 years old).  Then the next line said "But the Older He Becomes, The Tougher He Gets." (with a photo of him with his swimsuit, goggles, and these incredible hulk like boxing gloves). The next inside page carriered the theme with the ocean boarder and had the details "Come Celebrate (his nickname)8th Birthday"  Then it said Who:, When:, Time: Where, RSVP following with the words.. "You Will Get Wet Hopefully Not Eaten!"  On the back was directions, then in the corner it had a clipart photo of a cute comic shark (a guy with a shark head on & a scared swimmer) with words I typed by it "Join Us For a Bite".  Also I listed the relatives, name, address & phone number & mapquest directions.  I purchased a lot of stuff from Oriental Trading for the party.

THE   DECORATIONS: Tables had fish net on them with sea shells as center pieces.  I used large clam shells and hibiscus print platters & pails to serve food in.  I bought Green Netting from Walmart and draped it from the ceiling creating a seaweed effect.  I put fish nets in the corners of the party room inserting smaller inflatable fish in the nets.  I labeled all the food with "ocean names" as I will describe with the food portion.  I made signs for the room that had the pool in it such as: "Watch out for Sharks", "No Lifeguard On Duty", "No Swimming (the icon) with a fish on the outside of the icon".  The actual pool was decorated quite a bit because of the games.  I had blue & green streamers, plastic table clothes for food (that I put a white fish net over), blue & green plates, silver wear, etc.)

FOR FOOD: (The signs by the food were labeled as such:  "Octopus & Seaweed" (Take a Hot Dog and on each end cut an "x" creating 4 "legs" on each end - make sure you leave a space in middle so it stays connected) - when you boil the hotdogs the ends curl up.  You can serve on a platter of "seaweed - (Spinach Linginue Noodles) just add butter & parmesean cheese to your noodles for a little extra flavor.  "Seashell Pasta"  - a Cashew Chicken Salad - made with chicken, seashell noddles, mandrian oranges, grapes, & mayo.  "Ocean Punch" - blue coolaid, with sprite.  And ice cubes made with some Betty Crocker - shark gummies frozen in the middle.  "Sea Life Surprise" - blue jello prepared in a clear cup with the same shark gummies - topped with whip cream & gummy life savors.  "Goldfish" - Basically the goldfish snacks  "The Whale" - A watermelon fruit bowl cut in the shape of a whale with a tale - use celery (that you cut on the ends in small pieces and put in cold water - it will curl) for the spout.  "Shark Sandwiches" - Peanut Butter & Jelly & Tuna Fish sandwiches cut out with a shark cookie cutter (check out www.cookiecutter.com) for cheap cookies cutters in many shapes.  "Sweet Sharks" - Shark Sugar Cookies with blue icing & happy faces.

For the cake & ice cream made a simming pool cake (another great website recipe).  Make blue Jello but only use 3/4 cup of water and pour in pan and refrigerate uncovered for 1 hour.  In separate pan, make a white cake, cut into a kidney shape and put it on a cake board.  Hollow out 1/2 inch from the top but leave 3/4 inch for thick walls as a border, then freeze the cake.  Once cold, spread white icing over the sides & border of the cake.  Press colored cookie wafers (strawberry, vanilla, chocolate, etc) on the outside of the cake to make a fense.  Take the jello out of freezer, cut it into long slabs and pull out with a spatula and arrange it into the hollowed out center to make it look like waves ripple the jello a bit when you lay it down (it should be firm enough to do this).  You can add a wafer for a diving board, chocolate finger cookies for wooden planing.  Just befor serving you can place gummy bears in life-saver candy, add shark gummies going after the people.  Add gum balls for beach balls or thin mints (those little ones in green wrappers) to be rafts.

FOR GAMES:   First I made an "itinerary" and posted it around the walls of the party room, so kids & parents could see what was going on.  I didn't want kids jumping in the water as soon as they got there without going over rules & safety first so I opted to hand out party bags, etc. ahead of time and eat right away since our party was 5:30PM - 8:00PM on a week night and people had to come and go.  That way the kids leaving early still received their gifts.  It's dinner time and parents are coming home from work so we ate after kids getting goody bags, goggles, inflatable shark friend and me labeling everyone's stuff.

HERE'S WHAT THE INTINERARY SAID (by the \* is what I did for it)  "Our Shark Attack Strategy" Shark Food Arrives.(That is YOU..the People)  Get Prepared to Attack the Sharks

3) Label Your Gear & Decoy  (\*I had a black marker and put names on a gallon ziplock baggy so they could put their fish net party bag, & other goodies they'd get through the day in) I also wrote their names on their inflatable sharks

4) Take a "BITE" of Ocean Food & Learn OCEAN SAFETY LAWS  (\*during dinner I described to jumping, diving and must have buddy at all times in pool, etc. - I also introduced our sharks for the evening (who would also be lifegaurds - I bought these felt like shark hats for dad & an uncle).

5) Cake & Ice Cram in Honor of our #1 Shark Attacker MJ!  LET THE HUNT BEGIN!  (In other words on the intinerary here is the list of GAMES we would play - the intinerary of course just had the game titles so the kids didn't know what to expect)  (#1 & #2 were set up on pool already - the others I added)

The LOOK of the pool: Going the shorter way of the lap pool I had roped off three sections.  One rope down the middle of the pool to signify the deeper end - this is the end I had the decoy's around on the outside edges and then I had some sharks floating in the middle.  Then I had two more ropes in the shallower end with space apart to create two teams.  \*\*\*So when you looked at the pool from shallow to deep it looked like Game #1 White Rope, Game #2 Obstacle Course, Game #1 Yellow Rope, Game #2 Obstacle Course, then the middle rope for "deep end" , in the deep end all the sharks around edge (not in water) & in some in water middle of pool.

GAME #2 - "The Sharks Ate My Arms".  Basically an obstacle course I made you have to go through using kickboards (so I had 2 kickboards).  You swim to one side and hand kickboard to teammate on other side.  The obstacle course was made with inflatable beach balls that looked like octopuses for one team and crabs for the other team (Oriental Trading - Sea Creature Beach Balls - 1 dozen per pack - you get sharks, crabs, octopus, and gold fish, in shape of balls with tails, etc.)  I tied ropes to one of the legs and then used a milk jug filled with water to weight it and place it in the bottom of  pool so all you see in beach ball but it stays in spot you put it.  I used 6 of them for each lane and zig zagged them.  I also added 2 hoola hoops.  I put two weights on the bottom of hoops instead of one in the bottom middle (so it wouldn't spin) and then tied a rope on the top connected to an inflatable goldfish to float on top of water (different from the other obstacles floaties so they know when they saw the different creature it's a different obstacle - they would have to let go of kick board and dive under and through the hoops - you can also use old bicycle tires as I did on some).

GAME #3 - "What's Inside the Sharks Belly" - a prize frozen in the middle of a water balloon, each kid gets one and you see who can unthaw it first in the pool.  GAME #4 - "Who Can Save the Marine Life" - I ordered some various squirt fish (they are about the size of a tennis ball and if you fill with water they squirt squeezing with your fingers - a great bath toy) - I had about 100 of them and other floating objects threw them in the pool and the kids tried to collect as many as they could (they split them up and added them to their goodie bags at the end).  GAME #5 - "Bomb the Sharks" - Water Balloon attack on the "sharks" (dad & uncle) In the pool - one Rule - if the balloon pops you have to pick up the pieces so the pool stays clean.

GAME #6 - "Shark Attack" - the popular Shark & Minnow Game - with a twist.  Sharks face away from the minnows (the kids) and call out a favorite ice cream flavor or whatever the subject the kids choose.  The kids with that one swim across VERY QUIETLY - don't want to wake the sharks - obviously the sharks try to catch you - however if the shark turns around and no one was swimming then the sharks have to do a cannon ball in the water or what ever the kids decided as "punishment" for the sharks to do.  Last thing on intinerary - "Rewards & Play with the Sharks" - basically time to open gifts and open swim where we had more swim toys - a rocker raft, swim noodles, kickboards, etc.

PARTY FAVORS:  Mostly from oriental trading/fun express….they all received their infltatble decoy & goggle masks (not typical goggles - they all looked like sea creatues - very cool) & squirt toys from the beginning & games.  Then inside a green netting (Walmart - $.57/yard) tied with blue string I had a Shark Puppet, a Shark beanie baby, fish lollypops, gummy suckers (really cute with frosting, etc.), fish sticky things (you throw them at the wall and they stick), tropical stationary/pen/sticker set, glow-in-the-dark putty with eyes.    Thanks You's - the obstacle course creature beach balls dryed & deflated and put in an envelope with a thank you note.  About 20 kids & many adults - Great Time for my son's first school friend party - it's always been family before. 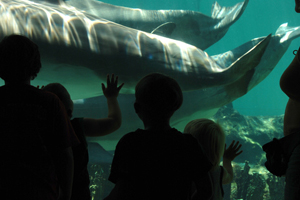