Disney Little Mermaid / Under the Sea party 3yr old. My daughter was Ariel for Halloween and wanted an Ariel party when she turned three in January.  I started to look for things on sale months in advance. Wal-Mart had their summer things on clearance (dive sets of plastic fish for $2, squirt guns for 10 cents). Target had sea creature stuff in their dollar section. Everyone was very impressed with the creative use of items and overall look.

INVITE: I made the invitation using color printer card stock and free Ariel clipart off the internet. The front had Ariel and the text Join us under the sea for a Little Mermaid adventure! I added glitter to the bubbles and card bottom (to look like the ocean floor). The back read: Friends of the sea have gathered to say /  Join us in celebrating Sammy's 3rd birthday! / Swim on over for fun fish games and food / We'll have a fin-tastic time with you. The post office had Disney character stamps including Ariel so even the envelope was in theme!

DECOR: On the front door I hung a picture of Ariel welcoming guests and a map of Sammy's Island.  I made a map of my house (burned the edges, stained with coffee) and identified all the main attractions (grotto, food, games/crafts, potty, etc.).  The living room was decorated with 5 pairs of blue sheer curtains (left by previous owner) hung on wire to create a water effect. We hung blue tulle, a blue wave decoration (from party store) and 4 sets of blue lights around doorways. The ceiling dangled with balloons and 35 metallic blue spirals with the movie characters at the ends (printed from clipart).

My daughter's birthday is shortly after Christmas so I was able to purchase blue lights and blue spirals (cut off snowflake at end) at a big discount. My mom made a sea cave out of a refrigerator box. She painted it blue, poked blue Christmas lights through out the box, hung blue ribbon and fish from the inside and had a coral reef along the back made from unusual floral picks (cranberry clusters, glitter twirls, etc). It looked very real. She also made a large clam shell by putting two blue/purple iridescent car windshield shades together. The shell was a perfect spot to open presents and was decorated with a gold pillow, plastic pearls, gold coins and other jewels.

I used Ariel wrapping paper to cover the doors of a hutch and filled it with all our Ariel dolls, Little Mermaid toys, Ebay finds and anything that looked like a sea creature (sea anemone looking balls). We put shell shaped soap in the bathroom and decorated the glass doors with fish clings. I had the movie playing and the soundtrack on in the living room. My daughter wore her Ariel costume and I had a tie-died blue shirt that resembled water.

GAMES: My daughter plays with all the kids on our street, so we have a big mix of ages/genders at our parties. Because there are over 20 kids, I avoid group games and instead set-up activities around the house appropriate for different ages. The first game was finding Ariel's treasure. I decorated a real trunk with pictures of Ariel and filled it with Styrofoam peanuts. I took a photo of 14 items I hid in the peanuts and mounted it inside the top of the open trunk with the sign Can you find Ariel's treasures?

The rest of the games were out on the patio. I filled a clear plastic storage container with water and put plastic fish and plant life to make it look like a fish tank. I had two fish nets for kids to catch a fish out of the tank. I filled my kid's water table with sand and hid plastic shells, Ariel figures, etc. in the sand for kids to find. I bought sea themed paper and foam sea creature stickers for the little ones to make a sea scene. The older kids could make a seashell souvenir with a clam shell filled with smaller shells, pearls (leftover from my grandmother's shell hobby), and glitter glue. I had the go fishing game out for kids to play too.

FOOD: I had kid food plus theme food like seashell pasta tuna salad, cocktail shrimp, blue Jello with Ariel and gummy sea creatures, goldfish and blue drinks. The table was decorated with Ariel paper goods and mini-wood chests filled with plastic pearls and chocolate gold coins. My mom got a round cake with Ariel's face from Albertson's which I surrounded with 2 dozen cupcakes frosted with blue and white icing (waves) and decorated with the Little Mermaid figures and gummy octopus, sharks, fish, sea horse, etc. My mom found fish candles to put on the cake.  We had an Ariel pinata with the gold coins and other candy.

FAVORS: The favors bags were clear cellophane bags with a ring of blue paper waves on the inside and Ariel swimming (stickers) on the outside. In each bag I put a goldfish snack bag, squirt gun, fish stickers, plastic fish, and fish clings for the tub. 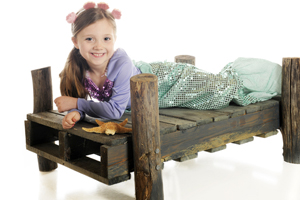