I got so many great ideas from this site that I wanted to share the details of my daughter's party to spark the creative juices in others.  Be forewarned, this is a very long party description.  My daughter's 4th Birthday Party was a Princess Barbie Party.

We distributed Princess Barbie invitations that requested at least one parent stay (I provided parent snacks), directions to "Naomi's castle", a list of (optional) gift suggestions, and a list of planned party activities.

The front door was covered with a lavender plastic table cover, and I added a banner reading "Naomi's castle", written in black permanent marker.  I hung a pretty swag of gold fringed purple cloth (used as a table overlay during Christmas) over the door and used two small planters embellished with lion heads as balloon anchor on either side of the door. I made "streamer" doors (reminiscent of the bead strand "doors" popular with teens) of lavender streamer tied around a double strand of white yarn to form entries to the living room (which leads to the dining room a.k.a. party room) and family room, where the craft activities occurred.  Groups of anchored pearlescent pink and lavender balloons provided a festive atmosphere in the living room and family room.  I also purchased a Mylar Princess Barbie balloon to provide a focal point in the living room. I don't like to have a matched set of all the paper products and cutlery, so we used a Barbie paper table cover that had a border of flowers, butterflies and other Barbie symbology (but no Barbie figurines or writing) in Barbie/Spring pastels but primarily white center portion.  Beneath the paper table cover I placed a lavender plastic table cover to protect my teak table and add a dash of panache.  I distributed metallic pink hearts over the white center portion of the table cover.

We used Princess Barbie dessert plates and cups, and grown up cream cloth napkins embossed with a flour de lis pattern.  A stainless spoon and fork were neatly wrapped inside and the napkins were tied with a pretty metallic lavender ribbon.  I used clear plastic fluted dessert cups for ice cream with ribbon curls in lavender and pink around the base of the cup.  Three small vases of white carnations also graced the table.  For "place cards", I wrapped clear cellophane treat bags in a beautiful silky lavender fabric (half-priced fabric store remnant), tied the fabric wrap with a lavender cloth ribbon, and tied a heart cut out of pink foam sheeting with each girl's name in a majestic print to the ribbon.  These packages were set on the Barbie dessert plate.  Room décor included twisted streamers in lavender, pink, dark pink and light blue across the diagonals of the dining room and wrapped around the dining room light for added center support.  Groups of three pink and lavender pearlescent balloons were tied with lots of pink, purple and light blue curling ribbon in each corner of the room.

Activities were the first order of the party and included three activity "stations":  1. application of pink or lavender nail polish, 2. makeup application, and 3. princess tiaras. Since the activities include fingernail painting and makeup application, I gave the parents the opportunity to decline attending by listing the activities in the invitation so they could decide if they didn't want their 3 or 4 yr. old participating in these activities.  I covered by family room and kitchen tables with purple and lavender plastic table covers for protection, and had pads for the hot glue guns.  I enlisted the support of three other parents before the party to assist with the activities.  The nail station had polish, remover, cotton swabs and tissue.

The makeup station included a two eye shadow compacts, blush, and lipstick.  I used cotton swabs and pads for applicators to minimize germ transfer and wiped the lipstick with tissue after each application.  A small trash can was nearby to simplify clean up. I found great jewel tone crowns from Oriental Trading Company and cut off several of the crown spikes so they looked more like tiaras.  I tied pink curling ribbon around the back of each "tiara" before the party and had each girl draw a color card corresponding to the tiara color to minimize conflicts.  The girls had adult helpers hot glue pink mariboa along the front of the tiara and jewels (from a craft store) along the front spikes.  The girls seemed to really like their tiaras and most of them wore the tiara for the remainder of the party.  The three activities occurred simultaneously to keep things moving.

Food was next on the agenda - strawberry or vanilla ice cream, cake and punch.  I made a Barbie cake using two 8" round cakes and a domed cake (baked in a Pampered Chef batter bowl) to form the skirt.  This height was needed, as I inserted a pretty full sized, clothed, "Rose Princess" Barbie in the cake (which later was presented as a gift to Naomi).  The Barbie came with a short pink sparkly dress with rosettes at the shoulder and removable full length skirt. I removed the full length skirt and wrapped Barbie's lower half in plastic wrap. The cake, which was frosted, split when I inserted Barbie, but I covered the split with 1" wide metallic lavender ribbon and added 3 more ribbon strips the length of the skirt evenly spaced around the skirt - you couldn't tell the cake had split (hurrah, as if 4 yr. olds would care).  The Rose Princess Barbie made a beautiful cake - even for a novice cake maker.  I also served a punch of Cherry 7-Up with raspberry sherbet (a pretty pink, frothy punch) in a clear punch bowl for added table festivity.  Apple juice was also available.

After the food was the games - Barbie bingo and jelly bean bag toss.  Each girl received a small "wedding bubble" necklace after she "bingoed" (another Oriental Trading Co. find - very cute, bubbles in a white tulle pouch with a fabric rosette and ribbon necklace).  For the jelly bean bag toss, I wrapped small quantities of small jelly beans in plastic wrap and wrapped the packets in tissue paper tied with ribbon.  I used a different color ribbon for each girl (again, each girl first pulled a "color" tag to minimize conflicts).  Each girl received four packets and took turns tossing their packet into a large diameter bowl.  I had my daughter test run this game to know how far away to place the bowl.  This took a bit longer than I expected, and some girls were getting upset when they missed, so on the third attempt I gave them an all or nothing try and, with some "quick maneuvering of the bowl", each girl managed to walk away with their four packets of jelly beans.

The grand finale was gift opening.  I presented each "princess" to Naomi and Naomi responded with, "Thank you Princess ----" for coming to my party.  After gifts, the girls retrieved their gift bags from the dining room table, I gave them Ziploc bags for their jelly bean packets and they left Then I collapsed!

A lot of planning went into the party, but the girls (6 total, including my daughter) had a great time and were well behaved.  Hope this information is helpful to you!! 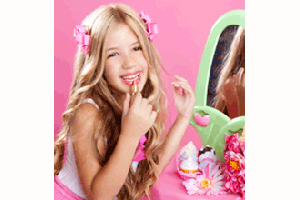