My son loves Barney so for his 2 yr birthday since we were inviting his little friends as well as family, we decided to have a "Barney Birthday Carnival".  We held it in our garage & fortunately the weather cooperated so we could set up our "Carnival Booth" - a large canopy tent - in our backyard for the games.

I decorated the tables with purple, yellow, & green tablecloths.  Barney tablecloths lined the food table as well as the cake & gift table.  Barney themed streamers decorated the middle of each table.  I also took several of my son's stuffed Barney's, his BJ, & Baby Bop & set them on the tables as centerpieces.  They each held 3 helium balloons in coordinating colors of purple, green, & yellow.

I purchased Barney themed plates, napkins & decorations from a party store & then used purple, green, & yellow cups & plasticware for the rest of the buffet table to save a bit of money.  Coordinating colored streamers ran from the rafters of our garage to decorate as well as the various colored balloons.  To go with the carnival theme, I put chips & pretzels in popcorn box containers that I bought inexpensively from a party store on each guest table.

Food was a simple buffet of various foods I made, & his cake was a Barney sheet cake with Barney cupcakes for the kids.  The canopy tent was decorated with balloons & a "Game Booth" sign.  When guests arrived, all the adults received a "carnival ticket".  These were actually a roll of those chance tickets discount stores sell for festivals. This was to be used for 1 of the adult games I had planned.  I wrote letters from my son's name on the back of each ticket, but only 1 ticket had a certain letter on it that was not on the others.  That was the winning ticket I announced later on in the party.

The other 2 adult games were "Guess how many Cheerios are in the jar" (since my son LOVES Cheerios)& a "How well do you know Nicholas?" quiz I made up of about 20 questions ranging from "what was his birth weight then & now"; "what time of day was he born" to "who are his 3 favorite TV characters", etc. Adult prizes were 2 liter bottles of pop, decks of cards, & VCR tapes for the men & tealight candles, mini photo albums, & lace doilies for the women all from the local dollar store.

For the "Carnival Games", I took a tall appliance box we had & converted it into 3 games:

I made a large Barney face from poster board on one side with the mouth cut out & hearts surrounding the face.  This was the Barney Baseball Toss.

On the 2nd side of the box I glued several construction paper balloons with the centers cut out & ribbons on the ends.  I made 3 purple, yellow, & green bean bags from felt squares & rice.  This was the Barney Bean Bag Toss.

Finally on the 3rd side of the box I had a Pin The Heart on Barney game which I ordered from a birthday website & made red paper hearts with each child's name on it.  Since the kids ranged in ages from 1 through 12 the rules for the older kids were a bit harder with the games.

I also had a duck pond game with ducks I ordered from Oriental Trading, & finally a pull-string pinata.  Instead of filling the pinata with toys since the kids were so little, I filled it with cereal bars, animal crackers, & goldfish crackers.

Every child won prizes for each of the games so everyone was always a winner.  Prizes were items I bought at a dollar store such as bubbles, crayons, chalk, etc for the little ones to pencils, erasers, cards, mini baseballs, etc for the older kids.

I had Barney favor bags filled with bubbles, playdough, stickers, a Barney party horn, & sunglasses for the little ones & filled the older kids' party bags with some school supplies.

Everyone had a wonderful time - especially the adults watching the kids play their games.  Some adults even got in on the fun with the kids.

My son had a blast with all of the activity going on & did very well for only being 2 years old.  I also ended up putting a few disposable cameras on the guest tables, which turned out to be a good plan since I was busy with the kids & the games while my husband video taped the party.  My son will have many photos to remember his 2nd birthday.  A fun time was had by all. 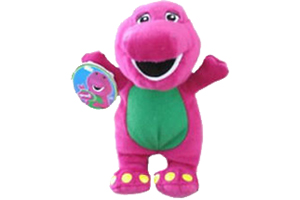