A Cow Party-5 year old  My niece loves cows and she wanted a cow party for her 5th, but not anything but COWS!!! It is not easy to come up with a party when it isn't a popular theme. But with some creativity, I helped my sister plan an awesome party that everyone just loved!!!!!!!

INVITATIONS, I created invitations on my computer that had a barn on them, and of course a cow! These had the details of the party when, where, for what, time and RSVP. We also asked everyone to come wearing their best barnyard attire. We used red and white checkered table clothes and had the party outside. Our mom helped us make a cow, using a saw horse, material, pillow, a head and a tail. The cow is made by centering the pillow on the saw horse and covering it with material (we used brown to have a brown cow, but white with balck spots would work), the head was attached to a dowel and placed in the front of the saw horse to create the head. I widh that this was my idea, but I had found it in Creating Keepsakes magazine. The "COW" was the center of the party and everyone at the party had their pictures taken while they were on the cow's back. It was cute and the guest really loved it.

GAMES, this is my favorite part of any party. And we come up with some great original (or at least we think they were) and some old favorites with a twist.

PIN THE TAIL ON THE COW, this game had a twist. Instead of having a poster to pin the tail on, we used the saw-horse cow. So this was a 3-D game. It was really cute to watch. Each guest got a tail to pin on the "cow".

MUSICAL MILK BUCKETS, (a Hot Potato type game) As the music played the children passed a small galvanized "milk" bucket around the circle. When the music stopped the child with the bucket was out. We used the music "Down on Grandpa's Farm".

HERD THE CATTLE, this game took a little pre-party prep. You will need white or brown balloons, black marker if using white and newspaper and tape or clean fly swatters. We blow-up white balloons and put black permanent marker spots on them. The balloons are the cows. Be sure to have at least on balloon for each player plus a few extra in case some pop during play. Also note to be careful with the markers as too much pressure causes popping. The other part of preparty preparation is to roll newpaper to use as a swatter if you are not using fly swatters. Have one swatter for each player. We used the rolled newspaper because we felt that fly swatters would end up costing to much. At the party, mark a starting line and an finish line.To play, give each player a balloon and a swatter. The chldren need to swat their balloon cow down the course. The first one to cross the line wins. At our party this game was great, being outside the children had to fight the wind to get their balloon cows down the course (this added the element of the cow having a mind of its own and the game taking longer) even so it had plenty of laughs and fun attached to it!!!

COW FLOP THROWING CONTEST, in this game we covered a small frisbee with brown paper to represent a cow flop. One at a time each child took a turn to throw the "cow flop" from a specific point. Each throw was marked along the area used. The idea is to see who can throw the "cow flop" the farthest. This was cute because my niece moved to the city so many of the children had no idea of what a "cow flop" was, but my niece explained it, since she has spent time in the country. We had planned on more game, but it didn't happen since we ran out of time.

STUCK IN THE BARN, you will need a large box, red spray paint, white tape and two pieces of posterboard. Preparty make a barn by spray painting a large box red. When the box is dry, use scissors to round the larger flaps (front and back) on the top of the box (this helps form a rounded roof. Fold the smaller flaps in toward the middle to work as supports. Next cut out the barn doors (rectangle large enough for the children to crawl through) with an X-Acto knife. On the front side of box decorate the barn doors with white tape edges and an X (one on each door). On the back side cut doors or just a hole (that the children can fit through).

To raise the roof, tape a few sheets of white poster board (end to end) lightly ceaseing them to round the roof. Tape them to the top of the barn. If you want a tin-roof look, cover the poster board with aluminum foil. At the party have an adult in charge of music, line the children up iin front of the barn. When the music starts, the first child in line crawls through the barn doors and out the other side. The next child follows. This continues until the music stops. The child caught in the barn is out. Stop the music periodically, until everyone has been caught. A nice touch would be to give each child caught a sticker. Even though we didn't get to play the game, it was a cute decoration and could also be used to add an element to the photo with the children on the cow as background.

For food, of course we had a cow cake (directions for the cake, come from the Family Fun website). We also served pretzels, ice cream and drinks. I had suggested making Purple Cows, Grape soda over vanilla ice cream (a float) but my sister thought that the children may not like that so we didn't.

Over all the party was very successful and the children had a good time and learned a little about the farm and cows. Most of the guest (adults and children) came wearing blue jeans, bib overalls, and the like. A few had cowboy boots, hats and other cowboy items too. It was great fun. After the party was over, the children received treat bags. The treat bags were square pieces of red and white checkered cloth tried with brown cord. In each one their were cow tails candy, tooties rolls, cow stickers (found at a scrapbook store), a little package of plastic farm animal including a cow). The children loved them and loved the party. It was definatly  a COW-TASTIC party and my niece loved it, which of course made
all of the work worth it. 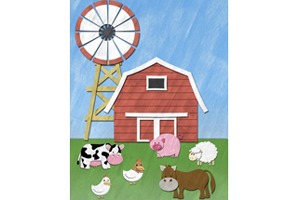