My son wanted a baseball party. Since it was in January, we had to hold the party inside; we rented a room at a fire station since our house was too small.

For decorations, I cut out pennants, mitts, bats, and balls to put up on the walls. We had red, white, and blue tablecloths, paperware, and balloons. I also found some mylar baseball balloons.  Because he was turning 5, we couldn't really expect his friends to play a baseball game (especially in January where we run the risk of rain). So, we had to come up with other games.

The first was a game using ping pong balls decorated as baseballs, spoons, and bowls. Each team put a ball on their spoon and walked it down to another bowl, then ran back to their next teammate. This continued until the bowl was empty. The second game was also a relay. The kids had to run to one end of the room, put on a baseball shirt, helmet, and mitt, then shout "hey batter batter", take it all off, then run back so their next teammate could do the same. The third game involved baseball beachballs. Each child chose a partner, then tossed the ball to them. The kids then moved a little farther apart and did the same. This game was not as successful, but they had fun. At the end, we gave the kids a medal for their great effort.

We also did a craft project. I made picture frames out of popsicle sticks, painted them, and put each child's name on them. As the children were arriving, I took pictures of them with the birthday boy. I had made baseball stickers from clip art on the computer. The kids decorated their frames with the stickers, then I enlisted an adult to tape the pictures onto the frames and glue magnets onto them so they could hang them on their refrigerators.

For food, we served apples with yogurt dip, carrots with onion dip, and popcorn. I made the cake, using a half sheet cake. There was a baseball hat on top and also a mitt holding a ball. The ball and hat were 3-D, so they stuck up.

I made the goody bags using brown lunch bags. I cut out a ball and bat out of material, then glued these onto the bags. Inside we put a baseball hacky sack, baseball tatoos, and a bag of caramel corn. We also added their picture frames and the medals. We also sent the kids home with the baseball beach ball since we had enough.

The kids and my son had a great time. I got most of my stuff from Oriental Trading and from PartyEtc. I found that ordering more stuff from one company pays off at the end because of shipping. 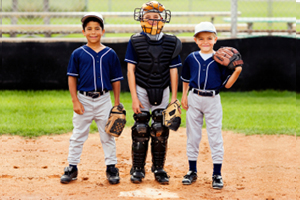