My daughter is a Max and Ruby fanatic! She loves the television series and the books by Rosemary Wells.  I knew that Max and Ruby just had to be the theme of her fourth birthday party, but was surprised to find that, unlike other Nick Jr. characters such as Dora and Sponge Bob, there aren't any licensed Max and Ruby birthday packages available.  My challenge of planning a Max and Ruby Bunny Party had begun!

Invitations:  Like I said above, Max and Ruby merchandise is limited in the U.S., and I couldn't find any licensed Max and Ruby invitations for sale.  I did find several invitation options on Ebay, however.  I chose an invitation with the wording Some Bunny special is turning 4!  Hop on over!  These invitations also included a photo of my daughter wearing her Ruby costume which I will explain in further detail below.  I also ordered matching Max and Ruby address labels from Ebay.  Finally, I let my daughter decorate the envelopes with Max and Ruby stickers we found from a seller on Ebay as well.  There are also some Max and Ruby thank you cards available on Ebay, but we ended up using a thank you card that is available for printing on www.nickjr.com for free.

Decorations:  I was very lucky that my daughter's birthday is in May because this allowed me to shop Easter sales for our Bunny Party.  Though it was a bit of a challenge to find things in the Easter section that didn't include chicks and eggs, I was able to find a lot of bunny themed decorations on clearance after Easter.  I found table covers, plates, and napkins with cute bunnies and carrots at www.discountpartysupplies.com.  I also found ceramic carrots that appear to be growing out of the table on sale at Hobby Lobby.

I made a Happy 4th Birthday banner using my cricut and the images of Max and Ruby from nickjr.com as well.  I found small beanie baby Max and Ruby dolls and placed a pair of them on each table next to the paper flower bouquet centerpieces.  I also placed Max and Ruby books around the house and on the buffet table.  I hung paper lanterns from the ceiling over the kids table in matching colors this saved me from dealing with blowing up balloons the day of the party.    I also hung a pair of bunny ears on the back of every chair for the guests to wear. Finally, I had a Max and Ruby DVD playing on the television.

The next game was Bunny Hopscotch since Ruby and her friend, Louise, like to play this game on the show as well.  I found a ring toss set that looks like rabbit ears at orientaltrading.com for the third game.

Costumes:  I found a custom Ruby costume on etsy.com for my daughter to wear in the photo on the invitations. She also wore this costume at the party.  The costume included a purple shirt and yellow jumper like Ruby most often wears on the show.  We added some bunny ears to complete the look.  All guests were also given a pair of bunny ears to wear at the party.  I found them on sale after Easter too.

Party food and snacks:  The menu at our Max and Ruby Bunny Party included chicken salad with carrots, bunny-buns, and a veggie-tray labeled Rabbit Food.  I also found a recipe for Ruby Strawberry Punch on the Ocean Spray website.  It was delicious!

The Cake:  No Max and Ruby party would be complete without the famous cakes seen in the book Bunny Cakes and at the beginning of every Max and Ruby episode.  My mom helped me recreate Ruby's angel surprise cake with raspberry fluff icing, buttercream roses, heart and star sprinkles.  We also made Max's cake counterpart, the worm cake!  For the angel surprise cake, we made an angel food cake and cut the top at a slant to make it lopsided like Ruby's.  We frosted it with raspberry flavored pink frosting.  I hunted down the heart and star sprinkles at amazon.com.  The finishing touch was the yellow buttercream roses and candles.

For Max's worm cake, we used a Wilton stand-up doll cake to bake a mound shaped chocolate cake.  We frosted it with chocolate frosting and gave it a dusting of crushed chocolate cookies to give it a dirt look.  Then, we decorated it with candy-covered chocolate candy that looks like stones I found on amazon.com, gummy worms, and cherry sours to resemble the red candies Max puts on his cake in the book.  My daughter absolutely loved these cakes.  They were delicious too!  I put pictures of Max and Ruby's cakes on the table near the cakes so that the guests who are unfamiliar with the books and show could see the look we were going for with the cakes.

Favors:  I made bunny-shaped favor boxes with my cricut machine.  Inside these boxes I put bunny and carrot shaped gummies (from Target), bunny teeth gummies (oriental trading,) bunny shaped sucker rings (oriental trading,) bunny tails marshmallow candies (oriental trading), and bunny lollipops (oriental trading.)  I also placed Lindt chocolate carrots on the tables at each place setting.  I found these at Target and waited until after Easter to get them on sale.  My daughter was able to help me with a lot of the party preparations and that was half the fun. It actually turned out to be a bonus that the store bought Max and Ruby products were scarce, because we had so much fun creating a lot of the stuff ourselves!  Hop to it and have your own Max and Ruby party for some bunny special!!!! 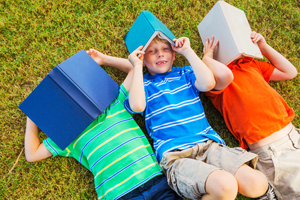