Bug Party for a 4-Year-Old  My inspiration for my 4-year-old daughter's bug party for came from a few things.  First, my daughter loves bugs and is always playing with ladybugs, pill bugs and chasing butterflies.  Second, I found the cutest paper at scrapbook store that had bugs (ladybugs, dragonflies and butterflies) crawling all over leaves and blades of grass in the background and thought I had to get it.

The party lasted for 3  hours and my daughter's father hooked up speakers and a microphone in the backyard and announced each guest as they entered the yard, which made everyone feel good.  We also had a bouncy for the kids, so they had something to do in the transition between activities.  There was music in the background and we made sure to make introductions so everyone knew who was who.  We had a craft table set up as well for the guests to have something to do for the first half hour while we waited for most of the other guests to arrive.  There were a variety of items on the craft table to create bugs.  We had tissue and paper towel rolls, pipe cleaners, glitter glue, googly eyes, crayons, stamps, and other craft items, too.  It was fun to see how creative everyone was.  My daughter's father did a big welcome once everyone arrived and we started playing the games.

Invitation:  I wanted something a little different for the invitation, so after some experimenting I came up with an invitation shaped like a bug jar.  After making a jar template, I cut out 60 cards, which were made from cardstock.  Then, I cut out the bug paper using the template again and glued it to the cardstock.  For the lid, I cut out the lid shape and used my gold stamp pad to color it.  After gluing the lid to the card, I used clear contact paper to cover the entire card and to give the appearance of a jar.  Next, I traced an outline on top of the contact paper in black and drew slits on the lid to really make it look like a bug jar.  Finally, I trimmed the contact paper, wrote Bug Party on the lid and was left with the perfect bug jar.  Inside were the details for party, which was the idea from this website  swarm date, infestation time, etc.  My daughter decorated the envelopes using a rainbow inkpad and bug stamps and a bug sticker to seal them.

Party Favors:  The party favors were brightly colored bug kits that contained a set of tweezers.  I purchased at the Dollar Tree and we gave them to each child right before we started playing the games so they could put their prizes in them and since they needed them for one of the games.  I debated about whether or not to fill the kits with goodies, but decided to use the goodies as prizes for our games.

Decorations:  We used ideas from various websites to make the bug decorations.  We made butterflies, caterpillars, ladybugs, bumblebees, and ants.  For the butterflies, we used tissue paper and the old fashioned clothespins with the round knob at the top.  Gather the tissue paper in the middle of the sheet and slip the clothespin onto the paper.  Attach pipe cleaner antennae, pipe cleaner legs and buggy eyes to finish.  We used 5 styrofoam balls, each painted a different bright color and attached them together using toothpicks, again using googly eyes and pipe cleaners for the antennae.  The ladybugs were large Styrofoam balls that were cut in half and painted red with black spots.  I also cut small Styrofoam balls in half, then in half again for the ladybugs heads.  Again they were attached using toothpicks and given antennae and legs made out of pipe cleaners as well as googly eyes.

Each ant was made from 2 styrofoam eggs and a Styrofoam ball.  We painted both red and black ants.  Once they were painted, we stuck a toothpick into both sides of the ball and added the eggs (point facing out).  Use pipe cleaners for legs, antennae and attach eyes.  The bumblebees were huge and made from 2 yellow balloons stuck together with rubber cement (stick top of balloons together).  Their black stripes were black streamers that were attached with the rubber cement.  For the wings, use yellow sheets of tissue paper, gather in the center of the page (will look like a bow tie), glue to the back of the balloon on the bottom and trim to look like wings.  Attach antennae by wrapping a black pipe cleaner around the part that you use to tie off the balloon.  Draw on eyes and a smile.  We hung 4 bees from a tree in our front yard and the other bugs on the front door, the party tables, our back fence, basically anywhere we could.  We also had a large spider from Halloween that we put on the porch.

There were 6 tables; the gift table had a pink tablecloth, the gift table had yellow and the others had green tablecloths.  In the center of each table was a plate full of gummi worms and candy and fake bugs were scattered all over each table.  A friend of mine purchased butterfly shaped balloons that were tied to handrails in the backyard.

Games:  Since most of the kids were preschool age, I wanted all the kids to get a prize just for playing so that no one would be upset.  I made signs for each of the four games out of posterboard and decorated each one with bugs.  Each game had a different station, kind of like a carnival.

The first game was Stick the Spot on the ladybug, which was an idea from this website.  I painted a ladybug on posterboard and hung it on the side of our house and attached antennae.  I had all 25 kids line up and with the help of a few friends we gave everyone an Oreo, which they had to take apart and lick the side with frosting to make it stick on the ladybug.  This game was a lot of fun and both the kids and their parents had fun with this one.  Each child got to choose a prize after his/her turn.  The prizes were bug rings, flower rings, bug stamps, bug stickers, and candy that we ordered from Oriental Trading Company.  Because my daughter's birthday is in the middle of August this was the only place I could find bug party favors.  I found bug Easter baskets at Wal-Mart last year and bought them since they were so cute.  We used these to hold the prizes and they were really cute.  The ladybug looked so cute after all the spots were on it.

The next game was the Flyswatter race.  We had all the kids form 2 lines.  Each pair from the front of each line had to carry a bug on a flyswatter from one end of our yard to a marker.  If the bug fell off they could pick it up, but they had to make it to the finish line.  This was really fun and all the guests cheered for all the kids.  Again, all the kids were able to choose a prize.  The next game was the Cocoon game.  This game was for big bugs and little bugs.  Again, we had the kids (and parents, older sibling or another guest) form two lines.  The object was for the little person to wrap the big person in a cocoon using a roll of toilet paper.  This one was so funny to watch and everyone got a kick out of it.

The final game was a bug hunt.  We used my daughter's inflatable pool filled with balls from another game she had (you could use sand or straw for this as well) and put 100 plastic bugs (Oriental trading Company) in it.  The kids had to use the tweezers from their bug kits to catch the bugs.  Each group of kids had 30 seconds to find as many bugs as they could.  While the games were going on, a few of my friends started setting up the food tables.  We went simple this year with hot dogs, hot links, chips, teriyaki wings and sliced watermelon.  The utensils were placed in wire wracks that we found at our local Walgreens store.  They looked like wire bug kits after we added plastic bugs to them.  After eating we did the cake.

The cake was a full sheet (from Safeway) decorated with pink icing on top and with green icing made to look like grass.  Each corner had pink flowers.  There were butterflies, ladybugs, caterpillars, bees, and dragonflies piped with icing on top.  It was one of the cutest cakes.

After this my daughter opened her gifts and said thank you to everyone for coming. This was one of my daughter's best parties and the parents really appreciated that we involved them in the games and that the games were non-competitive but still fun.  All in all we had over 50 people at the party.  It some prep work to make the bugs (and the invitations) but my daughter and I had fun making them together.  My daughter loved her bug party and has asked to have another one next year. 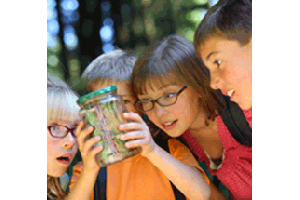