My son is a cub scout and for his 9th birthday, he wanted to have a campout in our back yard.  His birthday is in the end of May, but we picked the first moonless weekend in June.

When the boys came at 6:30pm (with their own sleeping bags), he had the BBQ going and we made hot dogs, hamburgers, baked potatoes, corn on the cob.

After we were done with dinner (half hour), we went to make tie dye t-shirts.  I bought large packs of white cotton t-shirts and fabric dye (T-shirts were 3/$5 at walmart, dye was $2 a pack at walmart).  To make it easier and less messy, I premixed 5 colors and put them in squirt bottles.  I showed the boys how to tie the shirts to get different designs.  After they were done (this activity took an hour), we put the shirts in individual ziplock bags with the boys name.

The next activity was an outdoors movie.  We hung up a king size white flat bed sheet on on our deck, set up chairs and using a laptop computer and an LCD projector which we borrowed (or you can rent) we had a great movie theater.  The feature film was Bill and Ted's Excellent Adventure.  We figured most kids had never seen it, and it was a blast from our past.  The boys LOVED it, and learned some history in the process!  (This took 1.5 hours)  During that time, my husband and I cleaned up the BBQ, tie dye materials and partially put together the tents while it was still not quite dark. At 9:30, We roasted marshmallows in an outdoor fireplace which we also borrowed from our neighbors.  The boys made smores out of chocolate, the roasted marshmallows and graham crackers. (this took half an hour).

At 10:00 we played flashlight tag. I bought each boy a flash light (at the $ store) which they used to play tag. (This was one of the party favors) The tag lasted half an hour.  At 10:30, when it was really dark, we brought out the telescope and an astrology graph and tried to find the corresponding stars.  They loved this and ended up getting an astrology lesson on their birth sign in the process. (This was also a half hour activity)  At 11:00 they all got washed up, pitched the tents (We had 3 tents for 14 boys) and then sat around the outdoor fireplace telling ghost stories, with the flashlight shining in their face.  At midnight they all went inside the tents to "sleep".

They woke up at 7:00am, we made breakfast, washed out the tie dye t-shirts and since they were already wet from washing out the t-shirts with a hose, they had a watergun fight from 8:00-9:00am.  I had bought each boy a watergun (at the $ store) as a party favor. The boys were being picked up by their parents at 10:00am, so at 9:00am we opened presents and had the birthday cake.  They took home the tie dye t-shirt, the flashlight and the watergun as party favors.  It was an awesome party.

PS: Make sure you write down the parents home and cell numbers as they drop the kids off in case there are any emergencies.  My husband slept outside on the porch overlooking the back yard to make sure everything was okay during the night. 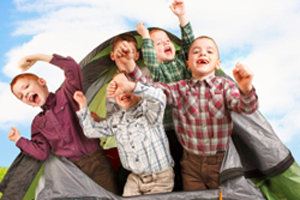