CARE BEAR SLEEPOVER: This was a birthday party that had been put together at the last minute due to some unexpected changes in plans.  We went to the local party store and my daughter decided on a Care Bear themed party.  We bought the Care Bear invitation (I usually make my own but didn't have the time to think about it this year), luncheon plates and napkins, cake plates and napkins, cups and tablecloths.

INVITATIONS:  I took the store bought invitations and glued cotton balls where the plain clouds where and got a gold glitter pen and colored in the stars with glitter to make it a little more personalized.  In the invitation I asked all the girls to bring their favorite bear and to wear their favorite PJ's to the party - this way everyone was already ready for bed and we could skip that chaotic part of the evening when you have nine 9 year olds trying to change clothes all at the same time.  Inside of the invitation, I sprinkled some rainbow colored confetti and stuck them in the envelopes.  On the outside of the envelope, I wrote each girls name, dotting all of the Is with hearts and then drew a rainbow over it and stars above the rainbow.

DECORATIONS:  Since Care Bears are so colorful, this was a fun and easy task.  I ordered three dozen helium filled balloons at the party store in four colors (9 yellow, 9 orange, 9 red, 3 dark purple, 3 green and 3 hot pink) and made a rainbow balloon arch with 24 of the balloons (I used the 8 yellow, 8 orange, and 8 red).  I took the balloon arch, tied it to 2 of my daughters Care Bears (one on each end to hold it) and placed it in the outside entry way to the front door.  I made sure to connect the 3 arches so that they wouldn't come apart and be all over the place.  I cut out letter from multi color cardstock that said HAPPY BIRTHDAY (my daughters name) and taped HAPPY on the orange row of balloons, BIRTHDAY on the yellow row of balloons and MY DAUGHTERS NAME on the red row of balloons (the letters were smaller than the balloons).

I bought several different colors of crete paper at the craft store and strung twisted Crete paper from corner to corner in my living room which was also were the girl slept.  I also cut out different sized stars, punched holes in the top and hung them from the ceiling with fishing line.  I took the balloons that were left and made small bouquets and had the 2 remaining Care Bears holding them.  One was placed in the center of the gift table and the other in the center of the food table.  I had the standard store bought Care Bear tablecloths on the food table and the eating table.  I also sprinkled rainbow confetti and 4-5 inch pieces of curling ribbon on each of the tables.

I blew up several dozen multi-color balloons (with help), tied curling ribbon onto them and stuck tape to the top.  We then stuck them to the ceiling of the bathroom, hallway, entryway and my daughters bedroom.  It made the house look festive and like I spent a lot of money on helium balloons.  I also made a list of Sleepover Rules and placed them on the front door and on the bathroom door.  The rules were simple, no going outside or answering the front door, no using the phone without permission, no running through the house, no playing mean tricks, no yelling, no fighting, no tattling, have fun.  I used Care Bear clipart that I found on the Internet and copy and pasted it onto a blank piece of paper. My daughter and I bought matching Care Bear PJ&s to wear.

FOOD:  The food was simple.  It was all of my daughters favorite things.  We had corndogs, chicken nuggets shaped like bears, and French fries for dinner, chips and popcorn for snacks, and eggs, bacon and bear shaped pancakes for breakfast.  For the pancakes, I used a simple cookie cutter to shape the batter.

GAMES:  I wanted to keep the girls busy so I planned several games for them to play.

1) Hot Potato - I purchased a pair of slippers with clouds, sat the girls in a circle and played hot potato.  I used a Care Bear movie as the music.  When I paused the movie, the person with the slipper was out.  The last person won the pair of slippers.

2) Musical Chairs I had each girl get their pillow and put them in a circle.  I used the same Care Bear movie as Hot Potato.  When I paused the movie, the girls had to sit on a pillow.  The girl that did not have a pillow was out and took her own pillow out of the game.  The last girl with her pillow won a Care Bear pillowcase.

3) Pin the cupcake on the Care Bear I purchased a Birthday Care Bear Poster and cut out some cupcakes (like on Birthday Bear) with each of the girls names on one.  Each girl was blindfolded and tried to put the cupcake on the bears stomach.  The closest to the actual symbol won the poster.

4) Relay Race The girls divided into two teams of four.  Each team member had to run from one end of the living room, into the dining room, put on a big shirt, big pants, big shoes and lipstick and run back to their team, take off the clothes and hand them to the next player.  That player had to run back to the dining room, dress and put on lipstick and run back, etc.  The team that finished first each won a Care Bear figurine.

5)  Bingo I made bingo cards but instead of BINGO they had BEARS on the top and pictures of the Care Bears as a border.  I cut up small square pieces of card stock and wrote the letter/numbers on them.  We played two games.  The winner of each game won a Care Bears folder.  The one rule that I did have was that each girl could only win one prize.  When a girl won a second game, they got a sucker that I had covered the rapper with Care Bear material and tied with a ribbon.  The winner became the first girl that had not won anything yet.  After the games, I put out snacks chips, popcorn and an ice chest full of drinks the girls got out their sleeping bags and pillows, and settled in to watch a few movies.

GOODIE BAGS:  For goodie bags, I bought some plain blue lunch sacks, painted a cloud and a rainbow coming out of the cloud and stars above the rainbow.  We filled them with a rainbow pencil, gel pen, necklace, bracelets and Care Bear activity book.  I punched two holes in the top and tied curling ribbon to close the bag.  Each girl received on as they left as well as the prize that they had won the night before playing games. 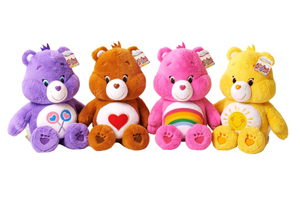