My son's birthday, Jan. 25th,  falls around the time of the Chinese New Year, so we decided that would be a good theme for his 6th birthday party. It gave me the opportunity to create something colorful and fun, while also being a lesson in another culture and their traditions.

I started scouring yard sales and thrift shops well in advance. We collected unique Chinese vases, platters, and wall hangings to decorate the house. Everything was very inexpensive. I also used the Oriental Trading Co. catalogs and website, as well as Ebay and other companies that were found with my search engine.  The invitations were beautiful Lunar New Year cards from a company which specializes in them. I believe it was fatming.com

Two weeks before the party our family took a trip to Chinatown in downtown Los Angeles and bought inexpensive items to decorate ( colorful paper lanterns and fans) and also shopped at a traditional market for authentic Chinese candies and snacks. We also took some great photos for our scrapbook.

We ate at a dim sum restaurant, the Empress Pavilion, where my son was able to try new foods and develop his chop-stick skills.

I did a lot of research on the internet. Found out about many traditions and tried to incorporate them into the décor and games.  In fact, I even made a paper-mache dragon head and long fabric body for the kids to have their own dragon Parade.  My son, and niece loved helping me put that together and decorate it with paint, feathers, sequins and glitter glue.  Other games were "Feed the Moon Bear" a bean bag toss game with a bear drawn on cardboard and a hole in the middle.

Also, pin the tail on the Siberian Tiger. Prizes were paper fans, Mulan coloring book, and a cute teddy bear with a Chinese symbol embroidered on it.  We picked up food from the local Chinese restaurant right before the party. Just orange chicken , fried rice and noodles.  I also had a tray of various snacks, including the crispy noodles which the kids love.

I used an idea from the "Special Effects Cookbook" for the fire breathing dragon cake. But, instead of baking the cake and cutting out the shape, I bought a plain cake from Costco and "painted" on a dragon face.  Dry ice "smoke" was piped through a hole in the cake positioned at his nostril to look like a fire breathing dragon.

Goodie boxes were Chinese food take-out containers from the Smart and Final store filled with a red lucky-money envelope containing a chocolate coin, and various trinkets from the O.T. catalog. Also, a fortune cookie and Chinese candies.

Games included the dragon parade which took place after I read the book, " The Dragon Parade"  during a craft activity where they made their own dragons using colored paper, the middle section folded accordion style, with Popsicle sticks at the head and tail for handles.  I said, " Wouldn't it be fun to be in a dradon parade?" They all said yes, so I revealed the dragon which was concealed under a sheet the whole time. They were so shocked and excited!

I had painted a wiggley "course" on the lawn with landscaper's paint from Home Depot, so nobody would get off track. It was gone with the next mowing.  All of the parents lined up along the parade route and used noisemakers and little confetti poppers, shouting "Happy New Year" as the dragon made its way around the yard.  The birthday boy got to be the head of the dragon first, then they took turns after that.

For thank you notes, I printed up a list of the facts and traditions we learned about and said that the Chinese New Year is a time of family and friends getting together and welcoming good luck into the new year. I expressed our good fortune to have so many wonderful people in our lives. It also is a time when the Chinese traditionally celebrate everyone's birthday, no matter when they were born during the year.  So, I wrote we hoped everyone enjoyed their birthday celebration!

I had been working on this for a year, a little here and there.  But, any of these ideas could be scaled down and put together in less time. 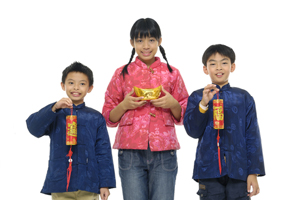