First of all, I'd like to thank those who have given so many of their wonderful ideas to this site.  I use it with each birthday.  I combined several ideas into my son's first birthday party.

The invitations were square shaped that looked similar to the popular child's toy where you sort shapes.  On the front I cut a circle, heart, rectangle, and triangle.  It read Robby's 1st Birthday (circle) Red (heart), Yellow (rectangle), Blue (triangle) We're having a Party and want to celebrate with you (across the bottom of the large square).  Then you pulled out other shapes from the top.

The first shape was a star that read...please join us for a color and shape party.  If possible, wear the color of this star. (yellow, green, blue, red were the star colors). The next shape was an octagon.  It told the specifics of the party. The last shape was a plus sign.  It gave directions to the location since we had it at a community center. I did have to order special square envelopes because of the size, so you may want to consider what is available in your area before cutting your materials.

The decorations at the party were very colorful. I had primary color table cloths, plates, napkins, and utensils.  I also purchased round, heart, and star balloons from Party City and added latex balloons to fill in.  I attached them to some of my son's toys that dealt with shapes and colors and used them as center pieces.  I also scattered shape cut outs that were purchased at a teacher store as confetti down the tables.

We also had rainbow goldfish, blue corn chips (triangles)and scoopable corn chips (round), cheese slices and cubes.  Everyone commented on how beautiful the table looked with the bright colors.

I decided to make the cake this year because what I had pictured in my mind would have cost a fortune in a bakery...and it wasn't very hard!  It had a rectangular base that was frosted with buttercream icing so it looked yellow, then I stacked a 8 round cake that was iced and then red fondant put on it on the left side of the rectangle then I cut and stacked a triangle made with blue fondant on top of the round.  This left room for writing "Happy 1st Birthday Robby!" on the rectangle.  I then used the star tip and made a large 1 on the triangle.  I used multi colored icing stars around the edges of the cake and then did some freehand swirls and balloons to fill in the space on the rectangle.

I made my son his own tiny square cake the had the same colors and said "I am ONE!" On the wall behind the cake table I had made a banner out of various shapes that was multi colored that spelled out "Happy 1st Birthday Robby!"  Each shape had one letter on it so it was lengthy but so cute!

On the cake table I had stacked his stacking cups and blocks on either side for decoration. We also had a clown do a short performance make balloon animals for each child and play silly relay games with them (Most of the kids were 4-7 years old).

At the end of the evening I handed out treat bags that were the plain white sacks with handles that I had covered with various shapes.  Inside the bags the children had bright colored frisbees beach balls coloring books and crayons silly bands with different shapes shaped sunglasses shape stickers and candy.

This party took some planning and organization but it was so worth it to see everyone's smiles as they entered the party room." 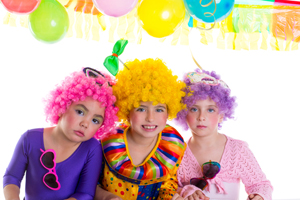