For my son's third birtday we had a road construction vehicle party. He loves bulldozers, bobcats, dump trucks, etc. but I didn't want to have a construction/building party. So we went with the road construction end of it. I also like to keep my parties generic, meaning not Bob The Builder in this case. I really like to make everything I can for the parties, whenever possible. I also used some ideas I found on this site.

INVITATIONS:  For the the invitatinos I found a cute cartoonish dump truck clipart on the internet and printed those out onto cardstock and then cut them out. I attached them to the front of a blank white card. Along the top and bottom of the card I ran a strip of black electrical tape for a road and then cut out tiny yellow hash marks from yellow masking tape (found at a dollar store). In the inside I printed out the information onto orange paper and attached it to the card. The invitation read: \*Rumble on over and join _ _ _ _ _ _ _  as we celebrate his 3rd birthday with a construction vehicle party. We're sure to have a bulldozer of a time.\*      Then there was a clipart picture of a bulldozer, below that was all the party information. I let my son decorate the envelopes himself with birthday stickers.

DECORATIONS:  Since we have a very large family I rent the fellowship hall at my church to hold the parties in. This works out well and provides a fairly clean slate to decorate with. The color scheme for this party was yellow, orange, and black. To welcome the guests to the party we had a real dump truck parked out front, which had clusters of balloons tied to the mirrors (my in-laws own and drive dump trucks). For tablecloths I bought black plastic tablecloths from a dollar store and added yellow hash marks (masking tape) down the middle to look like roads. In the middle of each table was an orange construction cone (purchased from a dollar store in packs of four, these were about ten inches tall - not full size cones).

I had my husband drill a hole in the top of the cones, so that we could string a cluster of balloons through them (one of each coloring and staggering heights). These cones and balloons (about 20) were also placed around the room in various spots. Another decoration we had was twelve wooden road signs that my husband and I had made my son for Christmas (they are about three feet tall and are cemented to stand on their own). These worked out so good for our party and were super cute. We also had lots of construction truck toys and hard hats (plastic ones from a dollar store) all over the room as well. On the food table I placed a samll real road construction flashing light I had found at a garage sale the previous summer for a dollar.

The last decorations were a large construction cone I made from orange tag board and stenciled on "Happy Birthday _ _ _ _ _ _!" and two posters on either side of that. The posters had 8 X 10 pictues of my son from the previous spring in overalls and a hard hat sitting on construction vehicles and inside a large tire. Around these pictures were construction vehicles cut out from Tonka wrapping paper.

GAMES/ACTIVITIES:    When the guests arrived the kids were brought over to the "Construction Crew Check-In" area, which had a sign saying that and also a picture of a foreman on it. They were given hard hats that were personalized with their name. They were then asked to punch in for their work shift using a time stamp on their own timecard. On these timecards were all the games and activites we were going to do. The kids were told they could go to one of two stations until everyone arrived.

The first was the "Truck Detailing Station" (again a sign saying this and a picture of a dump truck on it). There they got to choose between ten different construction vehicle coloring sheets I printed off the internet of Tonka trucks. I had a large can tied with black ribbon in the middle of the table that was filled with colored pencils for them to use. When they completed this and every other activity on their timecard they received a small construction vehicle sticker to put on their timecard in the spot next to that activity.

The other option they had was to go to the "Construction Truck Playzone". This was a sectioned off area inside four real construction cones. I roped off this area using yellow, black, and orange crepe paper twisted between the four cones, leaving one end open for an entry. I placed all my sons small (like matchbox car size) construction vehicles and his wooden blocks for the kids to play with and build roads. This was a big hit and kept all the kids of various ages entertained throughout the party.

The first game we played was "Construction Cone Ring Toss". I used a real construction cone (purchased at Menard's) and three plastic rings (from a ring toss game). The kids each got to throw these a few times. I maked a line on the floor using yellow masking tape for them to stand behind.

The next game was "Fill The Excavator". I made a very large yellow Tonka excavator from poster board and hung this on a wall (very time consuming, but it turned out really cute). Each child received a pile of dirt (cut from brown cardstock) with their name on it. We blindfolded them, spun them, and had them try to stick their dirt (tape on the back) into the scoop of the excavator.

The last game they played was "Boulder Toss". We used my nephew's large metal dump truck and boulder bean bags. My son and I made the bean bags using gray fabric that I sewed and we filled with little beans. We placed these in a hard hat and let the kids throw them into the back of the truck, standing behind the yellow line. I also had a TV/VCR set up in one corner of the room with little black cushions on the floor for the kids to sit on.

I had "There Goes A Dump Truck" and a "Bob The Builder" movie for them to watch throughout the party. I then had any adults that wanted to participate play an adult game. I had made up a construction truck work scramble game. I looked through different books to come up with lots of different vehicle names, some common and some more difficult. I printed these on yellow paper and at the bottom printed a picture of an excavator that I colored orange. The adult who figured them all out first won a bag of rocks (chocolate rocks from Hallmark).

After this we headed outside for rides in the real dump truck. My son and I rode around the large empty parking lot first, and my son absolutely loved it and didn't want to get out. We allowed him to stay in the truck standing next to his Grandpa while two kids at a time got to sit together in the other seat for their rides. This was such a thrill for all of the kids to get an experience like this. After the rides were over we went inside for my son to open presents. After presents we did cake and ice cream.

FOOD: For the food I had a variety of snacks and included cheetohs and doritoes since they were orange. I placed chocolate mints in a little dump truck. I had black plates, orange napkins, construction vehicle napkins and cups. Instead of cake I made four pans of brownies and placed them inside the back of my son's big metal dump truck (newer truck that had never been outside before). I washed the truck and lined it with tinfoil, and then stacked the brownies haphazardly inside. I also crumbled a few of the browines to look like dirt. I place three black and white stripped candles on top. I covered this with tinfoil before the party so that it was ready, but didn't get dried out.

When I carried out the dump truck into the party everybody thought it was a really cute idea. For the ice cream I pre-scoopedthem the night before and added yellow and orange sprinkles and brown jimmies on top. This worked out really well and saved a lot of time and effort at the party. The brownies and ice cream all went over really well and no one even commented that there wasn't a cake. I actually think most people enjoyed this more, I know I did.

FAVORS:    The kids each received their hard hat as a favor and also a construction truck when they left. I decided to do these instead of a bag of small things. There was also one baby, who got little socks with a dump truck on them instead of a hat and truck. I also like to do favors for the adults, and they seem to like getting something also. I made on my computer, bag toppers that said "Thank you for coming to my party, I hope you had fun. Have a safe drive home, but here are some spare tires just in case. Love, _ _ _ _ _ _". I added a cute clipart of a cartoonish man struggling to carry a tire. My son and I then placed two small chocolate doughnuts (the waxy kind) into sandwich bags and attached the toppers to them. My son handed these out to the guests as they left and thanked them for coming and the gift.

OTHER:    We bought my son a construction vehicles shirt to wear to his party and he also wore his work boots. I wore a black shirt and my husband wore a yellow shirt. This party turned out really well and my son just loved it. It is always worth the effort I put into it to see my son enjoy himself so much. I was also told that several of the kids asked if they could do it again the next day! 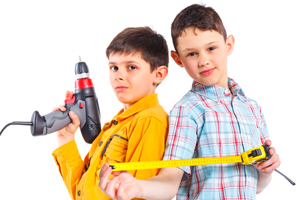