As the kids entered through the garage, they all received a time card and punched into the time clock and got their cards stamped.  Then they received their Home Depot tool apron, a set of plastic play tools, 2 paintbrushes, a set of work gloves and a plastic hard hat with their name on it.  Guests placed the gifts they brought in a wheelbarrow in the garage.

Also, we set up the fog machine to blow fog into a long safety cone to resemble a broken steam pipe.  After clocking in, the kids went inside and decorated their hats with stickers and received a construction truck tattoo.  The kids seemed to like the whole check-in process, but all the kids took off their hats and tool belts after about a half hour of playing outside.  Next the kids went outside to play and had their choice of construction activities.

1.  Daddy made a wrecking ball from an old deflated basketball and spray painted it black.  It was hung up on the swing set with a yellow plastic chain.  We had a bunch of cardboard boxes that the kids could stack up and then knock down with the wrecking ball.

2.  Daddy made a maze in the backyard with dirt fencing and construction fencing.  It was a curved path that zigzagged a little.  Inside the maze, we had the slide as an obstacle to climb over and a play area with a construction site toy.  We also put safety cones throughout the maze.  The kids loved running through here and chasing each other.

3.  We had 2 big appliance boxes that we set up on their sides, so the kids could crawl inside.  The kids painted the inside and outside of the boxes.

4.  We also had the little bounce house set up and the ride-on cars out on the driveway for the kids to drive.

5.  After the cake was served, the kids played pin the safety cone on the construction site.  We got a construction truck cake from Stop & Shop that had three construction trucks on top of chocolate dirt.  We also filled Nicholas big dump truck with brownie pieces and mixed in chocolate rocks (like M&M's but shaped like pebbles).  We served the brownies with a plastic shovel.  We used a black table cloth with white masking tape hash marks that went down the middle to resemble a highway.  Each kid had a safety cone cup with juice (Celebrateexpress.com).  The cups were a big hit.    When the guests left, they had to get their time card and punch out.  We paid them play money for working and gave them their favor bag.

For a favor, each guest got a brown paper lunch bag filled with the following:  small tape measure, chocolate rocks, small construction truck (matchbox size), orange steamroller that can drive on its own when the wheels are wound up, small flashlight and a little notepad with a construction truck on the cover.  They also got to take home their safety cone cup, tool apron, play tools, work gloves and hard hat.

Decorations:  We had 2 pictures of the birthday boy in a construction truck blown up to a 16 x 20 and framed on the wall (pictures were taken at a local Touch a Truck a couple months earlier.)  We had a few cut-outs of construction trucks we placed around the room.  We also had a few road signs (from party store) that we put outside on stakes and around the house.  We used caution tape both inside and outside the house.  We also had safety cones inside and outside.  We put  brown work construction paper (the kind used when doing construction in your house) on the floor with blue masking tape, making a path in the room where we had the cake.

I printed invitations on regular printer paper and then used craft scissors to make a jagged edge.  I glued the printer paper onto yellow construction paper to create a border.  Here's the wording:  Foreman Nicholas is turning three, Which means there's lots of work to be done, you see. The party's at the Last Name Construction Site, Sunday, October 7th will be dynamite. Your shift begins at two and lasts until four, You'll get messy, there's lots of work in store! Cake and juice will be provided during your break.

Each busy worker will be demolishing, building and painting, so wear your work clothes.  Please call and let us know how many little construction workers to expect from each family.  All parents are requested to remain at the job site to monitor the progress of your workers. I put clip art of construction trucks around the wording.   We decorated the outside of the envelopes with construction truck stickers.  We put yellow and black striped tape on the back of the envelope as a seal.

For thank you notes, I made each guest an individualized greeting photo card on Shutterfly.com.  On the front of the card was a picture of the birthday boy with the cake and 2 pictures of the guest having fun at the party.  We put the same stickers and tape on the envelope that we used for the invitations. 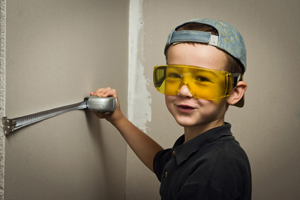