We did a great party for my son for his 11th birthday this year. Iron Chef America!! My son loves to cook and I knew this will be the last real birthday party he would allow me to throw for him so this was the perfect way to incorporate them both. First we had to come up with a place. I called the local school and was able to use the Culinary Arts room. This was the perfect set up for us. Three kitchens with class room space. In the planning stages we decided to order a few things (We live in a rural Alaska Village so no shopping centers here). I wanted to make sure all the kitchens had the same tools so I ordered kitchen gadget sets (We donated these to the school after the party). Next we wanted to make sure the kids had plating plates so I ordered simple white plate sets in different sizes and shapes.

Costumes: You cannot have an Iron Chef party without an apron and chef hat so we ordered them from a discount restaurant supply company. White and Red Aprons and White Hats. I also ordered my son a real Chef shirt to wear.   Favors: I sent my sister (in another state) to a dollar store to pick up kitchen tools (Cheese Graters, Wooden Spoons, Whisks, Measuring Spoons and Cups, Pasta spoons, etc) for the kids to have at the end of the party. She found a small laundry bag to put the tools in so we had goodie bags that were not really goodie bags. I also asked her to get me 3 manual can openers; more about that in a minute.

Next, the Invitations: I used glossy photo 8 ½ X 11 paper and printed them front and back 4 on a page. The whole invitation was Navy Blue with white lettering. On the front I took the Iron Chef logo and put it in the middle of the invitation. On top of that I wrote You are invited to join us for an Iron Chef America (logo) then under the logo: Cooking Party for Trey’s 11th Birthday. The back: all navy blue again with white lettering recipe card stlye:   Take one kid who likes to cook.  Add: Good friends,  1 Secret Ingredient,  Recipes to choose from,  1 ½ hour time limit,  Judges  Mix together on June 7th at the BBBSD Culinary Arts Room.

Cook: From 1:45  3:30. RSVP and my name and number.   I added a few small pictures of a chef hat and food to fill some space around the border and bottom. I put these in an envelope and sealed them with Iron Chef Logo stickers I made.   Now the fun begins. I had the judge’s arraigned (4 just in case one could not make it). I also arraigned an adult and teen helper for each kitchen (my son is very good in the kitchen however some kids do not have the same experience). I also asked two teens to be on floor reporters during the party. We gave them a couple of cameras and they took pictures and videos during the whole party. My husband and I decided the secret ingredient would be Cheese, all kinds of cheese.

Set up/Decorations: We set up a pantry for the chefs to gather ingredients from. We set it up on a long table covered with a table cloth. This included all kinds of pasta, spices, flour, sugar, sauces, meats, and veggies. We found an online site that had a count-down clock. We attached a projector to a laptop and pointed it on a wall all the kitchens could see so they can always see how much time was left. We set up a table for the judges so they could see all the happening in all the kitchens. I made signs for the door of the classroom titled Kitchen Stadium. I also made signs that I taped to the floor leading the kids from the front door of the school to the classroom titled This way to Kitchen Stadium with arrows.  We put the secret ingredient on a table in the middle of the room under a big blue tote. Next to it was a table with about 25 cookbooks. We used matching Red table cloths on all the tables to tie everything in. ****Snacks: My son made a homemade salsa so we had chips and salsa on all the tables for audience members. He also made mini cupcakes, a punch and tea. He wanted to make all the food. We invited Aunts, Uncles, Moms, Dads, family friends, and any one that wanted to watch to the party. We had about 20 people show up to watch. It was great to see so many people interested in seeing the party.

Activities: Now it was time to Party/Cook! As the kids came we dressed them in the aprons and hats. Once every one was there we put the kids into teams. We had 3 younger brothers and sisters come and they wanted to participate so we put one younger chef (7 to 9 years old) on each team. I had them choose a team captain, had to be a kid, and team captains were then given a red apron to wear instead of the white one the rest of the team was wearing. Next, I read the rules. 1) No fooling around in the kitchens. 2) All Iron Chefs must follow directions of the adult helper. 3) All teams will be given 30 minutes to choose their recipes after the revealing of the secret ingredient.  4) Teams will make a minimum of 3 dishes (Appetizer, Entrée, and Desert).  5) Teams will be given $40 to go to the store to purchase additional ingredients.  6) Chefs must wear hat and apron at all times in the store and school. 7) Teams will have 1 ½ hour to shop, cook, and plate all 3 dishes.  8) Teams will plate 1 sample plate for each dish made. This plate will be given to the judges for the plating score. Be Creative! 9) While a team is presenting their dishes to the judges all other teams must be quiet and respectful.

Now comes the part everyone was waiting for; revealing the Secret Ingredient. We made this very dramatic. We turned off the lights and my husband lifted the tote. While getting set up my husband put white twinkle lights around the cheeses. He also put a fog machine under it so when he lifted the tote it was smoky and the twinkle lights sparkled. There was a sound of ooohhh and aaaahhhh’s. The adults and teens were told beforehand to let the kids do most everything but guide them along the way. We turned on the lights and the chefs took the reins! They ran to the tables to get the cookbooks and to pick the ingredients that were provided that they needed. They all picked different recipes and made shopping lists and did the shopping. We gave them 15 minutes to pick recipes and make the lists.

After those 15 minutes we started the official countdown clock. We had a couple cars ready for the chefs. 2 from each team went to the store. The adults stayed back. This way the chefs had to make decisions along the way. Several teams got to the store and were unable to find ingredients on their lists so they had to substitute and they had to make sure they had enough money for everything on the list. This added another element of surprise to the competition. (I forewarned the cashiers we were doing this and they had just as much fun helping the kids in the store). It got very competitive in the store. Teams were grabbing things before other teams. One team (my son and his teammate) convinced a worker to open a check stand because there was a line with the other teams in it and they wanted to beat them back to the school. We had people come and see what was happening after they saw the kids in the store.

Game: Once 45 minutes had elapsed from the clock I stopped everyone and the clock. I added a twist to the competition. I called the adult helpers to a table, gave them all a can opener and had them pick a can (I took the labels off and they were all the same size. Mustard Greens, Beets and Baby Corn). They had to open the cans with the manual can openers and the one who did it fastest won. The other two had to use whatever was in the can in one of their dishes.  This was a great way to get the adults involved and the kids had a good time cheering for their team mate. We then restarted the clock. The reporters did a wonderful job; they interviewed the chefs, the adults, the judges and the audience during the entire party. They got all the spills, burnt food, falls, judging, and a lot of teamwork on tape. They also did commentary just like in the show.

After time was up the kids presented to the judges.  Scoring was on a 1-5 and 1-10 scale in each category and the highest overall score won. The categories were: Plating up to 5 points; Team work up to 5 points; Presentation up to 5 points; Taste up to 10 points.  The team leader had to present each dish one at a time and was the main contact with the judges. They told what inspired them to make the dishes, what the dish was called, what ingredients they used, etc. The judges asked questions and gave suggestions and critic. The judges gave their ballots to my husband he tallied them and revealed the winners.

The judges were very impressed and amazed with the food and the teamwork that the chefs displayed. The big kids really worked with the little ones and taught them along the way. Everyone worked very well together. The scores were very close and the chefs congratulated each other and could not wait to try the other teams’ food. The remaining food was shared with the audience. They spent time with the audience and were congratulated by them and got to talk and tell stories. We gave them the goodie bags and opened presents.

Cake: We did not have a traditional cake because we had so many deserts.   The teams cleaned up their kitchens and the party was over.

All the adults and chefs had a great time. One of the judges owns a little private school and she used our ideas in her classroom. This is a good party for kids that are getting too big for a traditional party but still want to do something on their birthday with friends. 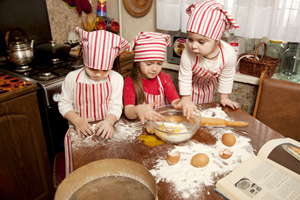