My 4 year old son Matthew decided that he would like a dinosaur birthday party on my suggestion.   I went online for ideas, and personalized the most interesting ones for our party.

I made our own invitations using pictures of a dinosaur world I found online on the front page of the invitation, as well as clipart pictures I found of a baby dinosaur popping out of an egg, a dinosaur skeleton, and a volcano on the inside of the invitation and told the children they were hints to the things we would be doing at the party. We had 15 children between the ages of 4 to 8 - most were 4 and 6 year olds.

The events I planned were:

1. Hunt for Dinosaur Eggs: PREP - I purchased small plastic dinosaurs, and using a recipie for coffee ground dough, (2 cups used coffee grounds, 2 cups flour, ½ cup sand, ½ cup salt, enough water to make it all stick together. I asked out local coffee shop to save their used coffee grounds for a day, and I used the sand from our sandbox.) I made 75 eggs with the dinosaurs hiding inside. This was tricky, because the dough had to hold together enough so that it would not run, and would cover/hide the dinosaurs completely. Then it took several weeks to allow for drying time, during which some of the eggs dried out too much, the dough fell apart, and I had to add water to recreate some of the eggs. But the results were well worth it.

I researched different kinds of dinosaur footprints, printed them off the computer, and created cardboard stencils of the footprints. Then I used brown spray paint to paint footprints all over our driveway and lawn, as if dinosaurs had been running all over the place. Then I created nests in 4 different places on the lawn  I used sand from our sand box to make small mounds of sand, put 15 eggs in each nest, covered the eggs with sand and then covered the nests with grass clippings saved from cutting the lawn to camoflage them.

ACTIVITY - As soon as the children came to the party, I gave them plastic bags (from the grocery store) and told them that dinosaurs had been in this area years ago, and to follow the footprints to find nests, and explained about camoflauging. They were allowed to take 1 egg from each nest. Once all the nests and eggs were found, I brought the children to the Hatching Tent where I had put down a piece of old plywood and covered it with an old blanket.

Each child was given a small real hammer (found at a local discount store had rubber/plastic heads for .79 cents each.) They hammered their eggs to find the dinosaurs inside. I put out plastic dishes of water and paper towels for them to clean off their dinosaurs with, as some of the dough sticks to the dinosaurs, but it is easily wiped off with water. The kids loved finding the eggs and LOVED hammering them open they were so excited to find the different kinds that were in the eggs!

CLEANUP: Once the children were done, I easily picked up the blanket with the dough remnants and threw them into the woods easy cleanup, all natural products.

2. Stick the Horn on the Triceratops: PREP- I had enlarged a picture of a triceratops I found online, made a poster size of it on the computer, taped it to a foam poster board, then laminated it with clear contact paper. I copied and printed off 15 copies of the horns from the triceratops, glued them on cardboard, cut them out, laminated them with clear contact paper, and wrote the children’s names on the back of each one (the children often like to keep their own, and the laminating enables them to be easily saved will not rip.)

ACTIVITY - The children took turns with blindfolds trying to tape their horns to the right spot on the poster of the triceratops.

3. Dinosaur Relay Game: PREP - I had spray painted dino footprints on the lawn in 3 straight lines about 2 feet away from each other, with a red start and stop line at the beginning and end of the footprints. Using the same stencils, I cut out dino feet out of cardboard (about as big as a child’ foot). I cut small grooves into the side of each dino foot and wrapped an elastic band around the feet so the children just had to slide their feet in through the elastic bands, and they would be wearing’ the feet on the bottom of their own sneakers. Then they each received a foam dinosaur mask (through oriental trading co., $4 per dozen).

ATIVITY - We set up 3 equal teams. Each child on each team had to step exactly on each footprint from the beginning to the end of the footprint trail, one after another. The team that finished first won. They kids loved the masks and pretending to be dinosaurs; and they were able to continue enjoying and pretending with them for weeks afterwards. CLEANUP none the spray paint wears off in a couple of weeks as the grass grows.

4. Dinosaur Door Knob hanger craft project: Under the hatching tent, each child picked out their favorite color of foam door knob hanger (on sale at local craft store), and used dinosaur foam stickers and magic markers to create their own dinosaur door knob hanger. The kids enjoyed this activity, but there were so many other activities, that I could have skipped this one.

5. Volcano Eruption: PREP - I made a 3 foot tall volcano - using a large plastic bucket, turned upside down, taped a plastic coffee bucket upside down to it, then a smaller plastic bowl right side up taped to that to create a tower. I duct taped leftover chicken wire around the tower to give it some shape and form, then taped a black garbage bag around it, leaving the hole to the top open. I dyed white vinegar red with red food coloring.

ACTIVITY - Each child received a dixie cup with the vinegar, and took turns making the volcano erupt. A parent was in charge of adding the baking soda to the volcano; I had LOTS of vinegar ready to go so the children could get many refills to keep the volcano erupting they had so much fun with this activity! CLEANUP the activity took place on the lawn, so no cleanup necessary; the cups were disposable, and the volcano dismantled easily after the party.

6. Digging Dinosaur Fossils/Skeletons: PREP I found a plastic T Rex skeleton mold on ebay (approx $12 reusable, can be used at the beach in the sand also, makes a skull, neck, ribcage, hips, legs, claws, very realistic looking). I bought plaster of paris at local craft stores with weekly coupons. I mixed the plaster of paris with water, and following the directions, I made 15 T Rex skeletons over the course of a month. Each mold dried within 30 minutes or so, so it actually went pretty smoothly. On our side lawn, I laid out each skeleton put together flat on the ground, a couple of feet apart, and covered each skeleton with a bag of topsoil. I taped yellow construction paper flags onto thin dowels and poked them into the ground at each skeleton, so each child could have their own dig site.

ACTIVITY: each child chose their own dig site and received a small paintbrush (49 cents each at local hardware store) to brush off their fossils once they dug them up. Then they received a plastic bag with their name on it to bring their fossils home. The kids were so excited to find the fossils they thought they were real at first!! CLEANUP: we just raked the topsoil across the lawn I had chosen an area where the grass was thin and needed more topsoil anyway.

The cake was a simple sheet cake with chocolate frosting. I placed dinosaurs around a blue pool (made out of a circle of blue fondant in the middle of the cake). Small plastic plants came with the dinosaurs I bought at a dollar store; they were tress and shrubs on the cake. Crushed graham crackers spread across the top of the cake looked like dirt. I made eggs out of small balls of thickened frosting (I added powdered sugar to frosting) and put them in a sand nest protected by a mommy dinosaur.  I found a small volcano at a cake decorating shop, created a mound of higher cake ground in one corner of the cake where the volcano could go and look much higher than the dinosaurs.

For goody bags, we decorated paper bags with dinosaur stamps. Inside were dino tattoos (oriental trading co), dinosaur crayon puzzles, wooden 3D dinosaur puzzles (found for $1 each at a discount store), and dinosaur fruit chews along with their fossils and paintbrushes, baby dinos that came with their eggs and their hammers, and their dinosaur door knob hangers. I also included dinosaur coloring pages I printed off from online and information about volcanos that I copied from a smaller volcano kit I purchased on sale.

The kids had a great time and were talking about the skeletons and eggs for weeks afterwards and Matthew thought he had the coolest birthday party ever! 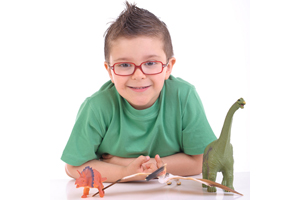