We celebrated my daughter's 10th birthday with an Easter egg hunt!  Invitations were made by using card stock and envelopes in Easter egg colors.  The cards were cut in a shape of an egg and my daughter cut out decorations and glued them on the egg.  The inside read:  It's birthday time, let's have some fun,  To Sarah's house be sure to run.  It's an egg hunt with a surprise twist,  Surely something that is not to be missed!  April 10th at 7:00 pm is the date,  We'll play games and hunt, so please don't be late!

To decorate the front outside yard, we hung up pennants in Easter colors that I found from Oriental Trading Co.  We also cut out huge bunny paws and laid them in the grass with golf tees.  It looked as though the Easter bunny had jumped from the street into our house to help celebrate.  As the girls entered the house, they were directed to the kitchen table where they were encouraged to decorate their goodie bags.  We used fabric backpacks and fabric markers along with jewels that the girls hot glued on.  The girls had fun doing this and had their friends sign their bag.

Once everyone had arrived, we began the games. To split into teams, the girls got into a circle.  I handed out a blown-out egg filled with confetti to each girl.  They then smashed their egg on the friend's head to their right. The girls LOVED doing this!  This activity provided great photos!  The girls were split into teams depending upon what color confetti was in their egg.  Be sure to have a vacuum handy to clean up quickly while the party continues on!  To make the eggs, pokes holes in each end of the egg with a toothpick.  Blow out the yolk, rinse, and let dry.  After the eggs are dried, stuff with confetti.  Tape over the holes with tape and color the eggs with permanent markers.  If you are careful, the tape and holes cannot be seen.

The games:
1.Spoon relay - Each team had to walk with an egg on a spoon to a point and then walk backwards to hand off the egg to their teammate.  First team to completely finish, won.

2. Mouth spoon relay - Same game as above, but this time, using plastic spoons, walk to a point and return with the spoon in your mouth.  Much harder!

3. Nose relay - Each member had to roll an egg with their nose from one point to another.  First team to complete won.

4.  Egg roll with stick - we made an obstacle course with masking tape on the carpet of our floor.  Using a croquet stick, the girls had to direct their egg through the course without going outside of the lines.  First team to complete, won.

5.  Bunny bag hop with puzzle - Each girl stepped into a burlap sack and had to jump to a designated point, pick up a piece of a puzzle, and jump back to her teammate, who did the same thing.  After each teammate made the jump, the entire team had to put together the puzzle.  I made the puzzles out of posterboard.  First team to complete the puzzle won.

6. Egg concentration - We had 20 pairs of Easter eggs.  Each pair was different and was put on 8x11 inch paper.  We lined them up on the floor and each team had to try to find matches. This is just like the regular concentration or memory game.  The only twist is that each member from a team had a turn.  No one was allowed to help a team mate.  The girls loved doing this.  Since the eggs were so large, the girls had to walk to turn over their selections.  We played this game twice - very popular.

7.  Egg Roll for distance - using a large piece of cardboard, we created a ramp and had the girls roll their eggs down to see whose went the farthest.

8.  Egg bowling - Using a white egg as the goal, we had each girl roll another egg from a designated point to the white egg, trying to get  their egg closest to the white one.

9.  Egg spin - Using a wood or vinyl floor, see how long girls can make their egg spin.  Really enjoyed this game and we did this quite a few times. 10. Present game - This game is similar to a white elephant or chinese auction type of game.  Each girl was assigned a number based upon when she arrived at the party.  The last girl to arrive received the first number and so on.  The girls with number one began the game.  She selected a large wrapped box.  Girls number 2 then had the option of selecting either Girl #1's box or another original box.  If she selected girl #1's box, then girl number 1 was allowed to pick another box from the original pile.  Game continued until each girl had a box.

Everyone opened their boxes and squealed with delight to find stuffed bunny rabbits!  Lots of stores discount their plush before Easter, so I was able to find some wonderful deals.  I always shop for discounted items after the season, so I had some great stuffed animals from last year as well.

Finally, we moved on to the egg hunt!  The twist was an egg hunt in the dark.  Each girl received a mini flash light.  Since it was raining outside, we had to use our basement to hide the eggs.  It worked out great anyway.  Each girl went into the basement in the dark, and using only their mini flashlights, had to find their eggs. Surprisingly, the girls had a difficult time finding their 20 eggs.

We then had cake and opened presents.  I had purchased some colored candles from Miles Kimball that glow the same color as the candle.  It was really neat and worth the money.  During present opening time, each girl selected half of an egg.  My daughter then pulled a half out of a bag.  She opened up the present of the girl whose egg matched hers.  Great way to avoid hurt feelings.

The parents arrived and the girls explained the egg hunt and gave them their flashlights.  I forgot about bags, so I gave the parents plastic grocery bags to carry their loot.  The girls decided they wanted to "haunt" their parents while the "hunted" for eggs, so they went downstairs to spook them.  The parents had fun and finally everyone left. This was an easy party for me since I always buy items the previous year.  I only had to purchase some candy and a few stuffed animals.  I have done a similar party for adult friends.

The invitations were the same although the inside read:  Its's Easter Time and the baskets are done, But why should only our children have fun?  An egg hunt for parents with a surprise twist, Is surely something that is not to be missed. So bring your baskets and get ready to find,  An egg hunt that is one of a kind.  April 18th at 7:30 is the date,  We'll eat, chat and hunt, so please don't be late!  It was great fun for all the adults.  I highly recommend it.  I stuffed the eggs with gift cards from Starbucks, little liquor bottles, garbage stickers, etc. It was an easy party and lots of fun. 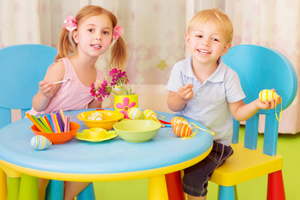