Garden Fairy Party - 4 year old  My daughter really wanted to have a fairy party this year.  Fortunately, she told me way in advance which helped me have enough time to prepare everything.

Invitations: Invitations were printed on pink paper and in one of the calligraphic fonts so it looked pretty and then I made the font really tiny as if written by a fairy.  Being so small they were hard to read so I sent out each invitation with a plastic magnifying glass and opaque star confetti in the envelope.  The invitation told them that wands, wings and fairy skirts would be provided.

Fairy Outfits:  For each child attending, I made them a fairy skirt, wand and headband and bought them fairy wings (which I was able to pick up from the Dollar Store).  I was able to purchase wings in four colours: blue, yellow, pink and white so the rest of their costumes followed the colour of their wings.

For the headbands, I purchased alice bands from the dollar store (I got 6 for CAN $1), and then sprayed them with silver paint.  I bought craft netting (like tulle but the one with the larger holes) in each of the four colours and for the headbands, I cut 17cm x 3cm strips and tied these onto the alice band from the centre going outwards about 6 cm either side (I used about 24 for strips for each band).  I had then bought silk flowers, different flowers for each girl and in their 'colour' and then hot glued three of the flowers onto each band.  They looked really cute.

For the wands, I wasn't really happy with the silver plastic wands I found, so I made some by using wooden dowel, a wooden star cut out from the craft shop, and then sprayed them silver.  To finish them off, I tied some narrow ribbon around the top, in their colour,(about 30 cm long) and bought some pearlised beaded cord and tied a length of that round too.

To finish off, they had a flower glued to them.  For the skirts, I used the craft netting in a double layer with elastic round the waist.  The top layer of craft netting, I ruched up and then stuck one of the flowers at the top of the ruche.  I made the skirts in varying lengths and waist sizes appropriate for each child.

Decorations:  I had balloons, streamers and tablecloths in the four colours and I also picked up some butterflies in pastel colours which I pinned over the fence and among the flowers.  I was also lucky enough to find fairies on sticks to go in amongest the flowers.  I also cut from the stems all the silk flowers that I had left over from making the costumes and placed these amongest the flower beds (on those plants that had already bloomed before the party!).  I also made some toadstools from upside down disposable bowls sprayed red and painted with white dots with a white paper cup upside down for the stem.  I bought a bubble machine which I had on top of the shed that blew bubbles across the yard throughout the party and had the sugar plum fairy playing quitely in the background.

Games/Activities:  I purchased lunch bags and stuck a picture of a fairy on them for the girls to decorate as their loot bags.  The fairy was in colour, except for her skirt and they decorated this by using dried petals - I dried them all myself using flowers from the garden and putting them under phone directories for about 5 weeks.  The bags looked really pretty at the end.  They also decorated a foam frame with foam flower shapes.  I got the book "Imagine You're A Fairy" and we read parts of that and saw how in order to be a fairy, we needed the wand, wings, fancy clothes, crown, etc  so we then set about finding these things.  I gave them clues which led to the shed where I had placed all the headbands in a basket and the next clue.

We then went to the front yard where, after all the girls had arrived at the party, we had hung their skirts amongst the trees and bushes.  They then found the skirt that matched the colour and flower of their headband.  After that, in order to earn their wings I told them that they need to dance around like a fairy; so as they were dancing I handed out wings (I would have extended the scavenger hunt for the costume parts to include this but I didn't really have the hiding spaces).  I then had the girls make a circle and think of a wish and as they revealed their wish, I gave them their wand.  We put body glitter on their arms and legs and then my husband took a picture of each girl on his digital camera and whilst the party continued he printed them out and put their photo in each of the frames they had decorated at the beginning of the party.

We read more from the Imagine You're a Fairy Book and talked about making wishes and then we made fairy dust.  I used silver glitter and silver/grey floral sand (bought from the craft store).  I told them that they could only use the fairy dust outside as they were garden fairies and that the fairies who lived in their house wouldn't be able to make wishes come true if they sprinkled it inside!  I put the fairy dust into those vials that you sometimes get when you buy fresh flowers as I wasn't able to find any small plastic or glass bottles.  I stuck a silver star on the top.

We then played musical toadstools (like musical chairs), I made toadstool tops (a circle from red poster board painted with white spots).  As each child was out, they received a candy.  I then told them that the tooth fairy had flown overhead and had dropped some money.  I gave them each a little chiffon favour bag (which I had bought at the craft store) and sent them back to the front yard where we had sprinkled $5 worth of pennies.  They loved finding the coins in the grass - this was by far their favourite event as to them it was 'real' money and the value was immaterial.  After the party, I went over the front yard quite carefully and the 12 girls managed to pick up virtually the whole 500 coins!!  We then played Pass the Parcel (when the music stops, each girl takes a layer of wrapping off the parcel, finds a candy and so on, until they finally unwrap the last layer and it is a gift).

Food: Mostly kid friendly food but all the chips, cheesies, fish crackers, popcorn, etc. were served in new plastic flower pots.  I made fruit wands - blueberries and grapes with watermelon cut in a star on the tip of a bamboo skewer.  I also made fairy wand cookies by making sugar cookies and as soon they came out the oven, I pushed a bamboo skewer into them.  I covered them in grey icing and sprinkled them with silver sugar (which I was able to find at a cake decorating shop) so they looked really sparkly.  The cake was based on a Debbie Brown cake called 12 dancing princesses, except I made fairies: each girl had a cupcake made into a fairy with sugarpaste in their colour of dress and iced with the same colour as their own hair.  They looked so pretty that every girl chose to take their cup cake home rather than eat it at the party.

Loot Bags: I didn't put too much in the loot bags as the girls all had their costumes but they had a candy necklace, a sucker flower (I cut out flower shapes and put the stick of the sucker through the centre so that the sucker bacame the centre of the flower) plus they had their frame with picture, the money they had from the tooth fairy game and their fairy dust.

The girls all had a great time and my daughter says she wants exactly the same party next year!!! 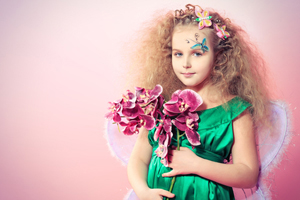