My daughter will be turning 4 in September and has requested a "Fairy" Birthday party. So we will be holding it in a nearby park, that has a few gazebo's and is surrounded by a lot of tree's etc that we will be hanging lots of decorations off, which will just be cut out Stars held into place with Curling ribbon, lady beetles, which I will just be cutting out of Red card board and using a Nikko to put the spots on, large butterflies & Toad stools again made out of cardboard. We will also have a couple of large signs in the shape of arrows, that will be painted pink and have written on them "Fairies and Elves This way!!!" and these will be placed in the carpark & along the path to the park.

I have sent invitations which I printed out myself which has pictures of fairies elves and butterflies which I got off the net and reads "Skye is having a FAIRIES & ELVES Birthday party  to celebrate her 4th Birthday She would love for you to be there ! ! There will be Face painting to help turn you all into little Elves and Fairies, and heaps of games & yummy food All you have to do is wear your favourite Fairy or Elf clothes & the wands, elf hats & wings will be supplied!!!!!!! All Fairies & Elves to be gather at _____ On the ____ at __."    We will be handing Wings made out of tule, which are very easy to make, just get a rectangular piece of tule, bunch it in the middle and  secure with a thick piece of ribbon. Then attach some elastic for the arm bands.

We have also made tiaras out of plastic hair combs which have a cardboard tiara tops decorated with glitter stars and stuck in place with hot glue guns, these will be for the Fairies (girls) as well as that we have made Wands for the girls out of dowl which we painted chrome, topped with timber stars which I picked up in the craft section of our hardware store, I painted all the stars different colours, and then hot glued them in place on the dowl with some ribbon underneath for the "flowwy" bits.

The Elves (boys) will have green elf hats with elf ears stuck on the side which we will make out of Green and neutral cardboard, and will have elf wands out of dowl painted chrome with different coloured stripes on the end of each, the elves/boys will also be getting wings but they will be green or blue wings. These items will be made up into packs and handed out as they arrive. We will also be doing face painting whilst the children arrive, boys will be painted green with little black whiskers and curly side burns & girls can have glitter, butterfly's and flowers.   We have got a large piece of butchers paper and will be spraying it with water mixed with food colouring for the table cloth so that it is nice & colourful, we will also be sprinkling glitter stars etc along the top of the table as well.

For games we have a fairy scavenger hunt, easy because we are in the park so we have lots of room, I told the children that the fairy princess is a bit upset because she needs a new house and can't get enough stuff to make it So I made up a necklace for each of the guests with the list of items on each (parents will have to help their kids find the items).  I made the necklaces by getting a piece of cardboard and decorating the edges with pinking shears, the list which I printed out on different coloured paper will be glued on top of the cardboard and then will have a hole punched in the top & a piece of curling ribbon strung through so that they can put in around their neck while finding the items from the list.

The list will consist of items like, 3 brown leaves (to help make fairy houses), 2 pebbles (for the fairy garden), something green (again for their garden), something shiny (to decorate their house) etc  We have also made cute bags for them to collect their "Fairy building materials" in out of Brown paper lunch bags which we have decorated with a stencil and some spray paint & some glitter, the first, second and third kid back with all the items receives a prize, all of the other kids will receive consolation prizes of Star cookies which we will be making and decorating with icing and cache balls, at the end, I will collect all the items that have been found and out them in a big envelope with the address of the fairy princess on it & mail it to her to help her build her new house .

Another activity that has been organised will be a large Fairy, on another piece of butchers paper one of my friends layed down while I traced around her, and then just drew on a skirt and some hair so that the kids can all decorate it, I kept all the scrap paper from making the decorations etc and cut them into mosaic squares so the kids can glue them onto her skirt and top, I also got some wool and cut it up so that they could use it on her hair, and they can use leaves from the park as well as a tub of crayons which will be supplied to decorate her.

The last game will be "Magical fairy parcels" (pass the parcel), I have found that the best way to do this so that you make sure that appropriate prizes go to each child (we will be putting lip gloss, glitter etc for the girls, and other toys for the boys, as well as some board books for the babies invited)is to keep a list of what and in which order the prizes are wrapped up in so that you can stop the music on the appropriate child, this saves the hassle of boys ending up with lip gloss and a girl ending up with a cowboy toy!!!. We wrapped up the parcels with the same sort of butchers paper that we used for the table cloth and sprinkled some glitter in between the sheets.

As we are having the party about 3:30 pm there was no need for a meal as such, so we will be making a variety of mixed sandwiches which will be cut into shape with Star cookie cutters. There will be fairy bread and jelly cups with sprinkles on top as well as fruit kebabs which will be just cut up fruit on a bamboo skewer with the tip cut off & we will be tying a bit of ribbon on the end of each. And just some cheerios & Pink & Green lemonade to drink.

For party favours we will be making toffee apples which will wrapped in celophane as well as some star cookies, of course they get to keep their wings, wands and tiaras as well.

It may seem fairly time consuming doing all of this for a childs 4th Birthday party but if you start early and do a bit each week it works out really well, also it wasn't that expensive as we didn't require much food at all and we made everything else. We will be having a lot of children attending (about 25) so we found it cheaper to make evrything, but if you are only having a few children over than it would probably work out cheaper to buy the costume items from a dollar store. I saved a lot of money by recycling items, I used lot of manilla folders that where going to be thrown out at work, these are colourful & I used them for the backing to the scavenger hunt lists, the decorations and the bases for the toffee apples (I wrapped the cardboard in glad wrap). I have no doubt my daughter and all of her friends will have a fantastic day, now all that is left to do is think of next years theme……. 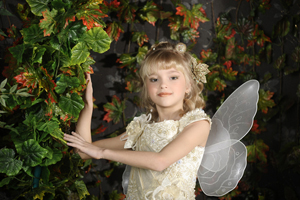