Title: Fairy Birthday Party, 6 yrs old  Because Morganne's birthday is in November, we needed to have the party indoors. For this party, we rented a room in her ballet studio. The room was large, with a beautiful fairy woodland mural painted on one wall, and mirrors covering the entire opposite wall.  The effect was a fairy woodland all around you- perfect for our theme!

Invitations:  we purchased Barbie Fairytopia theme invitations.  We filled in the printed side with all of the party details- date and time, location, etc.  On the blank side of the invitation, I wrote a poem.  Peek into the garden, and what will you see?  A beautiful fairy, sitting under a tree.  Her name is Morganne, and she's turning six.  Won't you join her for a party, full of dancing and tricks?  The good fairies there will help you earn your wings.  And we'll play games together, with pretty fairy rings.   We invited 11 girls, making an even dozen counting the Birthday Fairy.  Everyone showed up too, bringing parents and siblings in tow, so we had a full room.

Costume:  Morganne was a fairy this year for Halloween, so we knew exactly what she was going to be wearing for this party!  It really was a beautiful costume and will be a dress up treasure for years to come.

Decorations:  The room was already covered in a beautiful woodland fairy mural, so we focused on decorating the tables.  We pushed two large tables into the center of the room, and set up 3 smaller tables in the corners.  One side table was designated for presents, one for food, and one for activities and favors.  We decorated the main tables with Fairytopia tablecloths, and tied a helium balloon (pink, purple, or red) to the back of each chair.  On the birthday girl's chair, we tied a bunch of regular mylar balloons, as well as a special mylar Fairytopia balloon.  With the reflection in the mirror wall, it looked like we had a hundred balloons in that room! Craft:

The first activity the girls did was to decorate their fairy wings with flowers and jewels.  I had initially purchased a set of 12 wings off of ebay, but as we got closer to the party I worried that we wouldn't have enough, so I picked up another 1/2 dozen from our local dollar store.  I also purchased self-stick jewels, silk flowers, and glue dots from Oriental Trading.  I found additional silk flowers at the dollar store.  When the girls arrived at the party, they were allowed to choose a pair of wings from our activity table.  We had covered the main tables in the jewels and silk flowers it looked breathtaking!  The moms who had stayed got very excited about this project, so there was lots of grownup help at the table, whether the girls needed it or not!  Each girl decorated her own set of fairy wings, then wandered over to our food table.

The Food Table:  The food table was set up with a lot of fairy-friendly foods.  We had ranch dip in a hollowed out purple cabbage, with veggies and chips.  There was fruit dip (served in a hollow melon) with a fresh fruit salad, and an ambrosia fruit salad.  The biggest hit was definitely the chocolate dipped strawberries.  I dipped strawberries in Ghiradelli milk chocolate, and then drizzled white chocolate over them I made two cartons of strawberries, and still ran out within the first hour!  I also made fairy punch and had several varieties of soda.  The cake was on this table, as well.  For a centerpiece, we had a dozen hot pink roses, with ferns and baby's breath.  I also scattered a dozen lavender silk roses onto the table.

Dancing:  After nibbling on some fairy foods, the girls went into another room to do a 45 minute dance class.  Many girls had already come dressed in their fairy best, but if they weren't dressed up enough, we decked them out in pretty skirts from the ballet studio's reserves.  Most of the girls are in ballet together, so we arranged for their usual teacher to lead this class.  She did a lot of their favorite, familiar games and activities.  They were so precious, dancing and playing in the fairy wings they had decorated.  During the dance class, I passed out disposable camera to the parents, and had them take pictures of whatever they wanted that way, everyone made sure they could get a picture of their special fairy.  I also made sure to get pictures of all of the fairies dancing together!

Lunch time:  While the girls were dancing, we cleaned up the leftover jewels and silk flowers from the main tables.  At each place, we set out Fairytopia plates, napkins, tiaras, and blowouts.  I also had purchased some personalized candy bar wrappers (ebay, again) which said Happy 6th Birthday Morganne and had a picture of Fairytopia Barbie on them.  Each place setting also got a full sized Hershey bar with a personalized wrapper.  For lunch, I commissioned a local pizza parlor to make 30 personal sized heart shaped cheese pizzas.  They delivered the pizzas while the girls were dancing (to make sure they would still be warm for lunch time.)

There wasn't much room left on the table, so for centerpieces I used the flowerpots I had made for the flower pot ring toss.  As the girls and parents finished eating, they were invited over to the activity table to choose a box of crayons and fairy coloring sheet.  (I downloaded fairy coloring pictures off the net, typed Happy 6th birthday Morganne at the top of each picture, and printed them out.)  While the slow eaters finished up, the rest of the fairies colored their pictures.

Games:  After lunch, we played a couple of fairy games.  To make sure that we got great pictures, I passed around the disposable cameras again.  The first game we played was Pin the Horn on the Unicorn.  The girls whose horns were closest and furthest away got prizes.  After that, we played flower pot ring toss.  I glued silk flowers on green dowels, and planted them in flowerpots filled with foam and green moss, with pretty ribbons tied on each.  I also covered metal hoops with silk flowers for the fairy rings.  Each girl had to toss a fairy ring over the flower in the flowerpot to win her prize.  The prizes were fairy dust necklaces and sachets, which every girl received.

Fairy Dust:  I wanted to share one of our family traditions with Morganne's friends.  Each night when Morganne sleeps in her own bed, she gets a sprinkle of fairy dust so that the fairies will visit her in the night, and bring her sweet dreams.  (The fairies are scared of grown-ups, and will only visit a child's room. Great way to encourage kids to sleep in their beds, not Mommy's!)  So I made Morganne's Magic Fairy Dust necklaces and sachets!  I ordered heart shape vials from ebay, filled them with glitter, and tied a purple ribbon to each for the necklaces.

I filled a small plastic baggie with glitter, tied it with a ribbon, and placed it in a pretty fabric pouch for the sachets.  I tied the necklaces to the pouches, and then attached a card with a picture of a sleeping fairy and a poem Fairy love and fairy light, Bring sweet dream to me tonight.  Every night as a lie in bed, A sprinkle of fairy dust upon my head.  Fast asleep, I curl up tight, As fairies guard me through the night.  Each new day I greet the sun, Ready for more magic fairy fun.  Several parents thought this was a great idea, and said they planned on starting the same tradition with their girls (I guess I'm not the only one with a 6 year old who prefers Mommy's bed)

Present time:  After the games, we decided to open presents.  We pulled up 2 chairs next to the present table one for the birthday girl, and one for the girl that was giving the present.  This way I could get a picture of each girl and the gift she gave Morganne this will help when it comes time for thank you cards.  The rest of the girls sat on the floor in front of Morganne.  I passed out the disposable cameras to a few Daddies, who were more than happy to play photographer.  While Morganne was opening her presents, I let each of the fairies come to the favor table and pick out her own present- a favor box (from Birthday Express).  I wrapped all of the favor boxes in colored tissue paper, with the star from the wands peeking out the top.  They made quite an impressive pile the fairies had been eyeing them for at least an hour!

Cake time:  After presents, it was time for cake and ice cream.  I purchased a Fairytopia cake topper (ebay), and had a local bakery bake the cake.  The cake was a 1/2 sheet cake, chocolate with strawberry filling.  The cake was frosted in purple icing, with a border of pink and purple roses.  (Because each fairy had to have a rose on her slice of cake, of course!)  It was beautiful, and very delicious!  After cake and ice cream, it was free play for the fairies until it was time to go home.

The Favors:  Each fairy (and fairy parent) left the party with a full belly and and armload of fairy treasure.  The fairies took home their decorated fairy wings, Morganne's Magic Fairy Dust necklace and sachet, personalized candy bar, box of 16 crayons and personalized coloring sheet, Fairytopia tiara and blowout, butterfly bubbles necklace, a helium balloon, and their favor box, which was a pink heart shaped bucket filled with a sheet of Fairytopia stickers, a 3-D butterfly sticker, mirror, hairbrush, body glitter, and silver star wand.

This is the best birthday party I have ever thrown for my daughter the decorations were beautiful, the food was impressive, the girls were adorable, no one had trouble with the crafts or games, the parents were wowed, everyone got along, and not a single fairy was unhappy!  Best of all, I have precious memories and a ton of photographs which will last a lifetime! 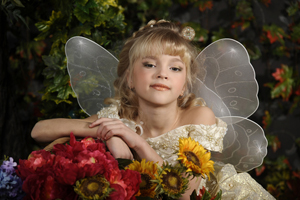