Fiesta Party  This party is intended for girls turning ages 8-11. TO DO BEFORE THE PARTY: Write down these Spanish names on small slips of paper- Carmen, Angelica, Paulina, Maya, Maria, Elena, Gabriella, Anna, Lucia, and any other Mexican names you can think of. Put them in a hat and as each guest arrives, they shall draw a name. That becomes her name for the party. ALSO- Write each name on a colorful little piece of cardstock and tie around colorful cups. Secure with tape.  TIME: Around lunch time(noon). LOCATION: Your backyard is the perfect spot. DECORATIONS: To set the scene, hang brightly colored garlands and a pinata from trees. Put a flashy tablecloth on the table.

INVITATIONS: Write date, time, place, etc. on the most colorful print of paper you can! Don't forget to have "FIESTA!" really big on it.

FOOD: Set up a Taco Bar on the table. Make sure to include sour cream, taco shells, meat, lettuce, tomatoes and cheese. Build your own tacos! DRINKS: Make classic punch or mix frozen lime juice with seltzer water to make to make Tangy Lime Punch. Serve in colorful tagged cups(see "TO DO BEFORE THE PARTY).

CINNAMON CHIPS-Use clean scissors to cut flour tortillas into triangle/chip shapes. Place chips on wax paper and spray with butter spray. Sprinkle cinnamon sugar on the top of each one. Place chips on cookie sheet and bake at 400 degrees until brown(about 10 minutes). Remove from oven and let cool before serving. Dip in Fruit Salsa.

GAMES: ROJO, VERDE-is a Spanish version of red light, green light. It is played just the same, except that instead of the It person saying "green light" to go, she says "verde". To stop the other players, she says "rojo" instead of "red light".

PASS THE TAMALE- Play salsa or meringue music. Guests get into teams of two and each person holds the end of a beach towel. Pass a ball from team to team. Whoever has the ball when someone stops the music gets a point. When a team drops the ball, they get a point. Points are bad.

Play until a team gets 10 points(they lose!). When a team loses, they must sit down in their place until 1 team remains. The last team standing wins! Oh, and by the way, when someone gets out, the other teams have to pass the ball over them.

ACTIVITY: Make a market filled with small trinkets! Get small things like erasers, pencils, hacky-sacks, yo-yos, slinkies, etc. at party-supply store in advance. Set up on a small table by how much the cost--in pesos. Pretend that little plastic gold pieces are pesos. Mark items as one, two, or three pesos. Give each guest 10 "pesos" to purchase the little treasures. Their purchases will become their favor bag. 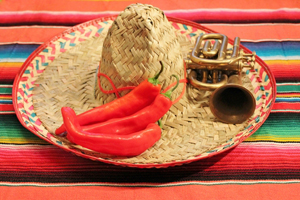