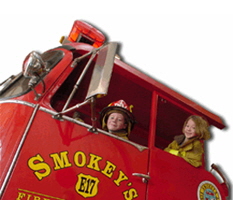 Imagine the look on your child's face when a big red fire truck pulls up with Fireman Rick behind the wheel!  Well, any kid who has a fire truck visit their party will be the envy of the school.  All kids dream of riding in a big red fire truck, ringing the bells and honking the horn with their trusty Dalmatian by their side -- Putting out fires and saving cats stuck in the highest of trees. 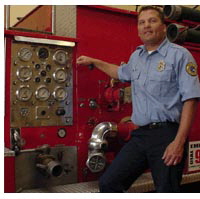 When Fireman Rick arrived in the big red fire truck, you could feel the excitement level rise.  He pulled up honking the horn, then came to a stop, jumped out and greeted everyone.   He was wearing his yellow fire coat and a yellow fire hat.  The kids soon had the truck surrounded and began checking out all the cool features and chrome gadgets sparkling in the sunlight.

Fireman Rick started with a tour of the truck, explaining what all the special things do. He explained how they can fill the truck with water through one nozzle and spray the water out of another.  He showed us where they stow all the gear and surprise, we found some extra fire coats and hats. 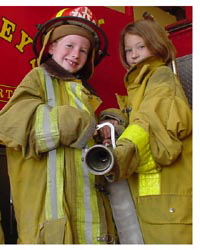 Next, we broke out the cameras and took pictures of the kids, taking turns trying on the fireman's coats, hats and gloves.  Fireman Rick even let them hold the fire hose and nozzle.  This really made for some cool pictures!

Well, by then the kids just couldn't keep their hands off the truck. So, Fireman Rick let them take turns sitting up in the cab, pretending as if they were driving to a fire. A group of them would climb on and all would start, ringing, clanging and dinging -- Ding, ding, ding, ding.....

Fireman Rick helped all the kids off the truck and pulled out one of the big fire hoses.  He brought it out onto the lawn and split the kids into two teams. 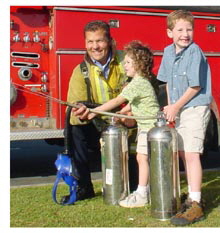 It was time for fire hose tug-a-war. They each grabbed and end of the hose and began tugging until one team finally collapsed.  Fireman Rick explained how fighting fires takes teamwork just like tug-a-war.  He showed the kids how to roll up the hose and placed it back into the truck.

For the next event, Fireman Rick had to get dressed in his fire coat and mask. He brought out some fire extinguishers that were filled with water and set them up at one end of the yard.  He then let all the kids take turns spraying him down.  Luckily it was a warm day because it was hard to keep the kids from spraying each other down.

Fireman Rick had one more surprise for us. He was going to give us all a ride in a real fire truck.  Lucky his truck is equipped with special benches on the top with seat belts for every passenger. We all climbed aboard and went down the street, honking and waving. Everyone waved back.  Who can resist a childhood dream of riding on a big red fire truck!!

Thanks to Smokey's Fire Trucks, in Southern California, which just happens to have one of the largest fleet of rental fire trucks around. And a special thanks to Fireman Rick who made the whole event a time we will cherish forever. 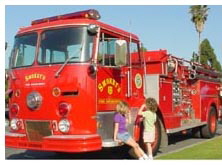 If you live in the Southern California area and would like to get in touch with Smokey's Fire Trucks, just call 888-FireTruck (888-347-3878).  Smokey's Fire Trucks are available for birthday parties and many other types of events, such as transportation, weddings, grand openings, etc.  Many big cities have an entertainer like Smokey’s Fire Trucks.  Just search them on the internet or look them up in one of the many free parenting newspapers.