For his 8th birthday, my son wanted a Monopoly party.  Not just a Monoply -themed party, he wanted to PLAY Monopoly.

But I could not find invitations.  I decided to make them myself when I found two kinds of Monopoly paper at our local scrap booking supply stores.  So I bought blank cards with envelopes, and began cutting and pasting.  On the front of the invitation, I put a label sticker (printed on our own computer) that said "You're Invited..." and two monopolies of properties I cut out from the scrapbook paper that was a reproduction of the board.  The properties and the label were backed with dark blue paper to make them stand out more.  The inside of the invitation was covered (on the right side) in the other Monopoly paper I found, which was a collage of Monopoly money.

Then on regular white paper I printed "to play Monopoly for Joey's Birthday!" and the rest of details: where, date, time, etc. and cut it in an oval shape and put it on top of the collage paper.  The left side (inside) had another set of properties from the board paper - the railroads or the corners or the utilities and Community Chest and Chance spaces, again backed by dark blue paper.  It was a lot of cutting, but the results were fantastic!  Before we mailed them, I inserted a note to the parents explaining that we were going to PLAY Monopoly and if their son was not familiar with the adult game, he would benefit from playing a game or two at home before the party.

Now I had to figure out how to get five 8 year old boys to actually sit down and play a board game!  With input from several people, I decided to have incentives they could win throughout the game, even though playing time was limited to one hour (or so), with me being the banker.  Every time an 8 was rolled, you got to pop a popper.  Every time you landed ON Go, you got a mini candy bar.  When you went to jail for the first time, you got a pair of play handcuffs.  When you landed on Free Parking, you got a Hot Wheels-type car.  We also had a Yo-yo act like a playing piece that only moved in turn (didn't have any money).

I started the game on Free Parking and whoever caught the Yo-yo by landing on the same space won it!  When certain properties were purchased, you got something: Waterworks  a squirt gun, Electric Company  a flashlight, Oriental Ave. fortune cookies, States Ave a mini road atlas, Marvin Gardens  a small potted plant, and Boardwalk  a $2 bill.  When certain Community Chest or Chance cards were drawn, you got something: Won 2nd place in a beauty contest a comb, Doctor's Fee a mini first aid kit, Christmas fund matures an ornament, Take a Ride on the Reading a train whistle, School tax two pencils that looked like they were wrapped in real money, and Elected Chairman of the Board a notebook and pen set.

There were also prizes for the end of the game: Most Monopolies a small trophy we had engraved with Most Monopolies / Joey's Birthday Party and the date. (This was the most expensive give-away, at $12), Highest Net Worth (Money + value of properties only) a wallet, and Most Buildings a magnetic building set.  All of these incentives were inexpensive (except the trophy) at our local discount stores.  Most were $2 or less, with a couple being $4 or so.  I figured I could spend a bit more than usual on prizes because the party was so small!

Finally, to take home all of the goodies they won, I found and ordered mini metal Monopoly lunch boxes on the internet.  They were the perfect size to carry home all of the loot, which included not only the prizes they won, but all of their Monopoly gains money, property cards, houses and hotels, Community Chest and Chance cards, and their playing piece.  (We purchased a new game to play for the party that we could dismantle.)

This party took a lot of planning and plenty of advanced time to acquire things in stores and in the mail, but it was great for a January birthday, when the party has to be inside.  All of the boys really enjoyed it; they especially enjoyed going home with all of their winnings!!! 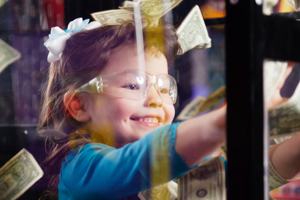