Fruits of Summer Party - 1Yr. Old Baby For my daughter's 1st Birthday, I wanted a unique theme that incorporated vintage fruit crate labels from the 40's. We went online to fruitcratelabels.com and looked at all the old vintage labels. We chose one that was from our area (Ventura County, California) and we downloaded it to our computer and then scanned in my daughter's photo and gave the "label" a new "brand" name. (Tia Rose Brand, after my daughter)

So the invite had her cute face in one corner, the background of an orchard and the new logo brand in the center. At the bottom, we printed Produced by Family Growers (after our last name). We printed it on antique white 8 1/2 x 11 card stock and then folded it over with her fruit crate label on the outside and opening up the inside read:   Grown from the very best of our family tree, The sweetest fruit of summer there could ever be. With a smile so bright & warm that it could never fade, She's the finest little produce Mother Nature ever made.  Hand picked with all the goodness that life could ever bring, She's the apple of our eye and the brightest little thing. So join us friends & family for a bumper crop of fun, As we celebrate the special day that Tia Rose turned One.  The invitation was a hit and set the theme for the party. An old-fashioned summer produce/fruit party.

We decided to have the entire party outside in the backyard to add to the atmosphere and theme. We selected lemons and limes as the main fruit and did all the plates in lime and pale yellow. We purchased lemon and orange kitchen sponges (shaped like the fruit) at Cost Plus Imports and placed them in the trees in our back yard. We went to the local grocery store and asked for "real" fruit crates and brought them home and placed "our" label on them. (We used full sheet sticker paper and printed them up and cut them down to size.) We placed oranges, lemons, limes, etc. in the crates and had them outside and around the house.

We went to the local farmer's market and purchased a bunch of old-fashioned flowers like, daisies, heather, mini mums, etc. and placed them in canning jars as centerpieces. (It was great because the canning jars are cheap and guests got to take them home and not return a real vase.) For the main centerpiece we used an old-fashioned galvanized tin milk bucket and had that full of similar flowers on top of the outdoor BBQ island. We purchased a watermelon piñata and hung that from our patio cover to add to the whole fruit/produce theme. Each table had alternating yellow and lime tablecloths and napkins were pink, yellow and green with 1st Birthday on them. We also purchased yellow and green balloons and had them floating everywhere around the house. The kids loved them! My sister made 3 CD's with music from the 30's and 40's. The old-fashioned music was similar to the music in the movie "O Brother Where Art Though". It was piped in through speakers in the yard and was a big hit. The older adults were really singin along with the old time songs. It really set the mood for the party.

For the Kids, we made home made playdough using the Kool-Aid recipe so they smelled good. Yellow, Orange and Green were used and I purchased cookie cutters in the shape of fruit and produce. That was the play dough table. We also had a "Make you own Produce Bag" table. We took brown paper bags and put each child's name on them. We purchased stickers with fruit, summer crops, etc. along with Die-Cuts from the local craft store that were also in the shapes of apples, watermelon, cherries, etc. We purchased crayons and glue from the 99 cent store and placed them all on the table. A "sample produce" bag was set up with directions. The kids loved it. (The table was rented and was a 6ft table just their size.)

We also set up a "produce stand" for the kids to play make believe. My husband placed a white paint tarp down on a patch of dirt and put up a mini market umbrella with the kid's outdoor patio furniture. We took my son's play kitchen outside and purchased a new produce stand (Little Chef) and gave that to my daughter for her birthday. All the fruits from the fake food were pulled out and placed in baskets under the produce stand. The kids had fun playing "produce" and grocery store. When it came time for the piñata, we had the kids bring their "produce" bags and wait their turn to fill them up with goodies. Some of the goodies were candy shaped like fruit and gummy snacks shaped like fruit, raisins, etc. It was very cute.

For food, we ordered from a local restaurant and served rotisserie chicken, roasted potatoes, fruit salad, garden salad and ranch dressing. We also had garlic and potato rolls. The appetizers were cinnamon apples sliced with apple butter, garden tomato salsa with chips, and veggies with spinach dip. All the appetizers were served in baskets or vintage looking trays. We also found marzipan candies shaped like fruit as well as sliced candy from the grocery store that looked like lemons, grapefruit, etc. (That stuff went fast!) All the drinks were sitting in galvanized buckets and were all real glass bottles. Old fashioned vanilla soda, cream soda, Coca Cola, IBC Root Beer, etc. (A lot of unique one's were from Cost Plus Imports.) We also served beer and wine for the adults.

The cake was ordered from the best little bakery store in town and we used white cake with lemon filling. The top was decorated with a lemon tree and in the middle, "Happy 1st Birthday ."

For the Goodie Bags, my dear friend gave me the idea to create a yellow shovel and pail set that would be filled with ingredients to make your own lemonade stand. We purchased the yellow pails and shovels from the 99cent store and filled them with a bag full of country time lemonade tied with a green ribbon. We also placed small white cups,a small roll of paper and a crayon (to make their lemonade stand sign) and a lollipop to pass the time with. Each pail was filled with "directions" that read:  My Homemade Lemonade Stand  Gather your supplies and pick the best spot,  Choose a day that is nice, sunny and hot. Set up an umbrella, a table and chair, Put a big sign up so people know yo're there. Lemonade for a quarter and refills for a dime",  Before you know it, you'll be sold out in no time. Remember to save all the money in the bank,  Yo'll be rich some day and have yourself to thank. (Ingredients: Cups, Crayons & Sign, Lemonade Mix & Lollipop)  They were wrapped in clear cellophane with my daughter's fruit crate label placed on the outside. They were tied with lime green gingham ribbon with a gift tag in the shape of a lemon. The idea is for the kids to mix the lemonade in their pail with the shovel. Too cute! I knew it would be some work, but it was worth it.

For the babies (the other 1 year old's) we took the extra playdough and cut it into slices. (Green, yellow and orange) and placed each one in the Reynold's colored wrap wax paper baggies (sold at the grocery store). After placing the play dough inside, we folded the baggie over, whole bunched it twice and strung jute ribbon through it. That, along with some age appropriate garden toys were placed in their pails and wrapped up in the cellophane. We tied the outside with the ribbon and used a themed cookie cutter to tie it off with. (To go with their playdough) Each child had something special to take home to remind them of the summer fruit party.

For the adults, we placed a jar full of lemon drops out and had guests guess how many in the jar. (The prize was the jar.) We wanted to do a watermelon seed spitting competition but we ran out of time. They also got to take home the vases with wildflowers in them.

The party was really great and the kids had a ton of fun. My daughter was so happy, running from table to table, eating, and opening gifts until 10pm. The party was from 4-7pm but went much later. We liked the time because it wasn't so hot and kids had all napped. The adults relaxed more (drank more too) and seemed to really unwind.  All in all, it was an unusual theme for a 1st Birthday Party but once we got going, it really fell into place. The things that went over the most were the "produce bags" craft table for the kids, the old-fashioned music, sodas in a bottle, the invitations and the Lemonade Stand goodie bags. It was a memorable 1st Birthday for my daughter and she really enjoyed herself ... which was the best part of all. 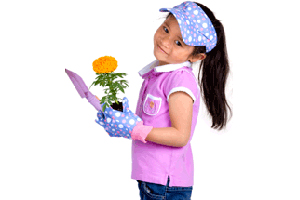