My daughter and her friends are crazy about Hannah Montana and she had to celebrate her 6th birthday in Hannah style.

I wrote her invitation from HM songs found on her cds (capitalized words) and it read:  Because...  Life's What You Make It, We Got the Party! Come on over and let's Make Some Noise! Who Said? Who said we can't be superstars?  I say, I say, that we already are! Remember, Nobody's Perfect so plan on dressing up, getting on stage and Pumping up the Party! Who knows?  You might even be a Rock Star!  Hannah in concert and Randi Chele, just hanging out- definitely  The Best of Both Worlds! The invitations also contained a ticket (printed on cardstock from my home computer) that was hot pink with white polka dots and said Hannah Montana, aka Randi Chele & friends; Live in Concert; the Block Party Birthday Bash 2008! It also included the date and time of the party, of course.

We built a small stage with a runway (as she had seen on the HM concert movie) that was painted with glittery music notes, stars, the HM logo and also a logo that said Randi Chele and Friends. There was a big purple glitter star on the end of the runway for solo dancing. We hooked up a karaoke sound system and decorated the stage with shiny purple, gold and silver fringe curtains, hanging stars and a purple table skirt around the bottom.

To kick off the party, my daughter (dressed as HM, wig and all) was escorted out by her bodyguards (her 12 year old brother and 3 of his friends, dressed in black tshirts with security printed on them) to the stage. As she approached, her cousin Luke (5 years old and dressed as Rico) introduced her on the mike with, Is everybody ready to rock with Hannah Montana? Her friends (all dressed in HM wigs,  sparkles and clothes, too) all cheered as she took the stage. She sang the first song and then her friends joined her for HM karaoke fun. The boys were given black tshirts with backstage crew printed on them to wear.

We had ordered inflatable guitars and microphones from oriental trading for everyone, along with guitar bubble necklaces. We had a tattoo parlor set up for rock star tattoos. The HM guitar cake, iced in purple, pink, and lime green was set on a cake board (made from a storage container lid) that was covered with HM wrapping paper.  They enjoyed the cake, cookies that were cut into music note and star shapes, hot dogs, grape sodas and Sprite (keeping with the purple and green theme).

We had HM decorations everywhere that we had purchased from various places. The party was in the late evening, so when it got dark we projected the HM 3d movie outside onto the wall of the playhouse with an infocus projector for them to watch. We had HM 3d glasses and little lawn chairs for them all. Most parents stayed for the party, so I had photo books from all of my daughter's previous parties available for them to peruse, as most of the kids had been in attendance at all of them. It was fun to see how much the kids had grown since the first birthday party 5 years ago.

At the end of the party, all the girls took home souvenir concert tshirts. The shirts all had the Block Party Birthday Bash 2008 design (that I made on the computer) on the back with the HM logo, stars, music notes, and a polka dotted Randi Chele and Friends logo. On the front (left pocket section) was a copy of the concert ticket (purple and with white dots, printed just like the tickets). Above the ticket was a picture with Randi Chele, Hannah Montana, and each little girl (for her own shirt). Raand Chele said it was her best party ever! 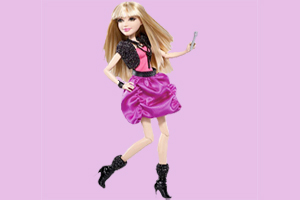