Incredibles Party - Character Party - 4 year old.  My soon-to-be 4  year old is "hooked" on The  Incredibles and wanted an Incredibles Party.  i had a difficult time finding ideas for this party, so I  had to come up with ideas myself.  I found 2 websites with FREE downloads that I used A LOT for  this party.  The first site is the official Disney Incredibles site.  The URL is http://disney.go.com/ disneypictures/incredibles/main.html.  The second site has Disney clip art, including Incredibles  clip art.  The URL is http://www.geocities.com/disneyclipart/.  First, my son and I decided to make  our own invitations.  I used a home print/art program to create the invitation.

The front of the  invitation looked like a brick wall.  In the center was a jagged-edged black cirle with individual  bricks flying off in all directions.  We attached an image of Mr. Incredible, from the 2nd web site, to  the center of the black space with a thin wire, wound into a spiral around a pencil.  So, the front of  the invitation looked like Mr. Incredible was bursting through a brick wall.  We printed up and cut  out brick-shaped confetti, which we put into the envelope, to complete this infect.  On the inside of  the invitation I used another piece of clip art from website #2 above, of the entire Incredible family.   The wording was:  You're Invited!  Come help the INCREDIBLES save the world from Syndrom &  other bad guys!  This was followed by the party information (my son's name, location, time, etc.)

We decorated with red, black, and orange streamers in the house along with baloons that had  images of The Incredibles printed on them.  In the front yare, we put up signs, cut into pointed- edge shapes with words like "POW!" or "WHAM" on them as decorations.  When each guest arrived,  they were given a Incredibles t-shirt to wear, which I had made.  I bought plain t-shirts and blank  iron-on paper for my printer at a craft store.  I downloaded images of the Incredibles along with the  logo from website #1 above (it even prints out backwards, so it's ready to iron on.)

Each guest also  received a paper mask to wear and as many Incredibles tatoos as they wished.  I purchased these  items from a party store.  After they were wearing their "costumes,"  each guest was given a red  visor, purchased at a craft store, to decorate.  I printed up clip art of the different members of the  Incredibles family (and Frozone) from the 2nd website above and used spray adhesive to glue them  onto colored sheets of sticky-backed craft foam.  I them cut out the images.  The kids simply  peeled the paper backing off of the characters and stuck them on their visors.  They looked really  cute in their visors, t-shirts, and masks!

Now came the games.  I went through an abbreviated  version of the movie.  First, I explained how "Supers" used to save the world and catch the bad  guys.  I told them about Mr. Incredible, Elastigirl, and Frozone.  I told them that a bank robber had  broken into a bank vault, but while Mr. Incredible was chasing him, he spilled the money all over  the street.  I told the kids that they were going to pretend to be Elastigirl and collect all the money  to return to the bank.  The kids sat in a circle and I gave each a large stretchy, sticky hand (the kind  attached to long stretchy "strings.")  Then, I sprinkeld play money in the middle of the circle.  The  kids had to "fling" their stretch hands into the circle and try to pull in as much money as they could.   They had a great time, but they did need to stand up, which was OK.

Next, we pretended to be Mr.  Incredible, who was chasing the bad guys.  Each child got a "pull-back" car that I purchased from a  party supply store.  I had spray-painted each car black and used a red paint-pen to write an "I" on  the top of the car.  On the bottom of each car, I wrote a guest's name.  I had drawn lines, a start  line, and a finish line on the back patio.  The kids sat at the starting line, pulled back their cars,  and, when I said "GO" let them "fly."  We played this many times, as it didn't take up much time.   Now it was time to tell the kids more of the story:  how Mr. Incredible and Elastigirl got married and  had 3 children.  I told them about Violet, Dash, and Jack Jack.

Now we played a version of "The  Farmer in the Dell" adapted for the Incredibles.  The kids sat in a circle and my son, the birthday  boy, stood in the middle.  I had made masks of each member of the Icredibles family with foam  paddles, purchased at a craft store, to which I glued a picture of each characters face (downloaded  from website #2 above) using spray adhesive.  So, we started singing "The Incredibles Save the  World."  My son held the Mr. Incredible mask and when we sang the 2nd verse (Mr. Incredible takes  a wife), he chose 1 of his guests who received the mask of Elastigirl.  Then, when we sang the 2nd  verse (Elastigirl takes Violet), that child chose another guest from the circle, who received the Violet  mask.  Then, Violet chose Dash, who chose Jack Jack, who "stands alone."  Finally everyone sits  down, except "Jack Jack" who starts over as Mr. Incredible.  We played this several times, so that  every child had at least 2 turns.  Next, I told them how Syndrom had taken Mr. Incredible captive on  his island with 2 mountains.  I explained that Elastigirl, Violet, and Dash were flying a plane to the  island to rescue him.

This lead to our next game, in shich the children had to try to land a foam  plane, purchased at a party supply store, on a styrofoam island floating in a small kiddie pool.  I  made the island using styrofoam shapes purchased at a craft store.  I used two large 16" diameter  disks, glued them on top of each other, as the base of the island.  Then, I glued 2 smaller disks  side-by-side on top of the base.  On top of 1 disk, I glued a 4X9" cone and cut the tip off.  I glued a  foam bell on top of the other disk.  Then, I covered the foam with paper mache to smooth out the  foam shapes and creat some more natural "bumps," so it would look like an island.  When it was  dry, I spray-painted it brown and green and stuck little plastic trees into the foam (we have a bunch  of those trees around the house from dinosaur sets, etc. that my sons have.)

On the day of the  party, I attached a fork to a string and attached that to the bottom of the "island" and placed it in a  kiddie pool, filled with water.  (The fork keeps the island in the center of the pool.)  The guest stood  around the pool and threw their foam airplanes at the island.  My husband retrieved the planes, so  the kids could throw them again and again.  Now, I explained to the kids that Mrs. Incredible,  Violet, and Dash had rescued their father, but that Syndrom had already launched his rocket.  The  large robot was destroying the city.  Syndrom was there too.  It was up to the Incredibles and  Frozone to destroy the robot and defeat Syndrom.

My sons and I had made a pinata to look like the  robot.  We used a round punching ball as a form and covered it with paper mache.  When the paper  mache dried, we poped the punching ball and painted the round pinata black.  We attached 4  construction paper legs and feet.  The pinata was filled with Incredibles fruit snack bags, Incredibles  stickers, and other Incredibles favors.  The guests took turns hitting the pinata and trying to  destroy the robot and save the world.  When the robot was finally destroyed, and the prizes were  collected, it was time to capture Syndrom, the robot's creator.  I had drawn a picture of Syndrom on  a large poster board.  I purchased "glacier balls" from a party supply store.  The guests pretended to  be Frozone and threw the ice balls at the image of Syndrom.  Boy did the kids love this!

Next, it  was time to calm down and have cake.  I made a Mr. Incredible cake using a "santa" cake form and  an image of Mr. Incredible as a model (from website #2 above).   We used purchased plates,  napkins, cups, tablecloth, etc.  Last, we opened presents.  The kids took home their "costumes,"   goody bags of prizes from the pinata, ice balls, foam planes, pull-back cars, etc.  This was a great  success of a party!  All the kids had a terrific time. 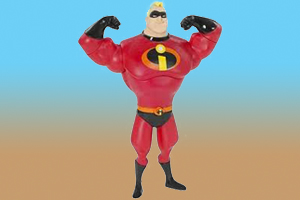