Japanese/Chinese Party - 7 yr.:  For some reason, my daughter decided she wants a Japanese party this year. This was a little challenging so I ended up combining Japanese and Chinese themes.

INVITATIONS:  I looked all over the web for some fan templates.  I found one, where you basically make a lightbulb shape, cut about 6-8 of them, put them all together, punch a hole in the base and use a brass fastener to fasten them.  I fanned them out how they were supposed to be held and then wrote "Please Come To a "FAN"-tastic Japanese Party" across the top, and all the details.  I then folded them back up and stuck them in envelopes.  Basically, you have to unfold it into a fan to read the information.  Since these were a weird size then, I stuck them in a plain envelope, wrote the girls name on the envelope and put a few Japanese stickers all over.

I also found a website where you can type in any name & it will translate it into Japanese for you.  So I put their Japanese name underneath their English name.  My daughter likes when we dress up if a party calls for that, so I got Chinese dresses for me and both my daughters off of ebay - straight from China, for about $12 a piece, including shipping.  We have an appointment with my hairdresser friend to have our hair put up in buns and I already bought the "sticks" that go in your hair (Walmart).  At the end of summer, Wal-mart was clearancing out their flip flops for $1 a pair.  I got really lucky and found some with an oriental print.  I bought up about 20 pairs to be sure I had enough.  So when the guests arrive, we will have them take their shoes off at the door, (just like they do in China!)and put on their oriental flip flops, which they can take home when they leave.

DECORATIONS:  The local party store had some Chinese New Year decorations in stock.  So I got some red plates with chinese writing on them.  I also got the same design in napkins and dessert plates, but instead of getting the paper cups, I opted for the plastic disposable coffee cups - the small sized ones I thought could pass for tea cups.  I decorated them with some permanent markers and they ended up looking great.  I also got a few Chinese dragons, fans, and lanterns to hang around.  Since I never like to spend $3 a piece on tablecloths that just get messed up and tossed out, I always make my own.  I found some oriental coloring pages from the DLTK's craft website and traced them on my large paper.

I get rolls of "newspaper" paper from my local printer, they call them "end rolls", basically the leftover paper on the roll once they do a printing.  They'll give them to you for free.  There's a ton on each roll, and I just roll out a few lengths as long as my table, then trace the coloring page pictures onto them & have my daughters color them in.  Here and there I tried to scatter some Japanese writing, but it was very time consuming looking up symbols, so I ended up reverting to using some of my old Gregg Shorthand symbols.  They looked a little Japanese to me and the kids don't know the difference!  I make a few of these, one to cover the table during craft time, and one to change out for eating, incase the first one gets too messy.

CRAFT:  I found a couple of crafts online, one is for a cat named "Maneki Neko", which is the Japanese beckoning good luck cat.  They basically cut and color cat parts which are then glued onto toilet paper tubes.  As they're coloring, I explain the story behind the cat - that once there was a poor preacher and his cat living in a hut.  One day a rich man was standing near a tree looking at the view.  He noticed the cat in a window and it looked as if the cat was beckoning him to come over with his paw.  The rich man went over to see the cat, and no sooner did he start walking, than the tree was hit by lightning.  The rich man made sure that the preacher and his cat never went hungry again.  I also got a great craft for making little chinese lanterns out of the Family Fun Magazine February issue (also on their website.)  We also are doing an Origami lamb and box that my babysitter taught me how to do.

FOOD:  I was going to cook up a few batches of fried rice, but since that would be pretty messy, I got a few bags of the Stauffer's Skillet Sensation meals, where everything you need is in one bag.  I found some chicken lo mein.  Since you basically throw it in a skillet on medium and let it sit for 10 minutes, I don't have to be spending a lot of time cooking while the kids are waiting, I can throw it on the stove while they're doing their craft.  I bought chopsticks at the grocery store, and while my husband and I were out at a Japanese restaurant, I had the waitress show me how to do them up so that the kids can eat with them, with a rubber band and a piece of paper.  The chopsticks are held together at the top, so all the kids have to do is snap them open and closed, and they don't have to worry about holding them the right way.  I thought that would cause less frustration and meltdowns.  I also bought fortune cookies by the box at the grocery store.  For the cake, I usually make my own but my daughter wanted a Japanese girl on it, so I had a local woman here do it.  She is also writing "Happy Birthday Arlena" on it in japanese writing.  I found out that Happy Birthday in Japanese is "Tanjoubi Omedetou" so I can have everyone sing it when we do candles.

TREAT BAGS:  I always hate spending so much money on little toys that the kids take home and lose or break.  I had a great idea (excuse me while I brag :)  )  My husband works for a company that does embroidery for other companies.  He can buy t-shirts for about 75 cents a piece.  I wanted to have him do everyone's name in their Japanese symbols on shirts, but they have to make a separate "tape" for the machine for each different design, so I found the japanese symbol for "Friend" and had him embroider it really big in the middle of a t-shirt.  Each girl will get to take home a Japanese friend t-shirt in a Chinese take-out box.  A local chinese restaurant sold me the larger size boxes for 20 cents a piece.

I'm also making play fortune cookies, I got the instructions off of the Family Fun Magazine website.  You take some light brown felt and cut a circle about the size of a yogurt cup.  Fold it in half, put a piece of paper inside with a "fortune" written on it.  Put a continuous line of glue around the outside edge of the tan circle, then immediately lay the white strip of paper across the felt circle to one side of thee crease, making sure it sticks out of both ends, then fold the felt over and push it with your fingers until the glue sets.  Push the felt in the middle of the folded area to make it puff up and add some glue to the middle where the felt will meet when pushed togeether, push the ends toward each other and hold until the glue sets.

NOTE!  They won't be able to open the cookie, it's just a decoration, so whatever you write on the fortune, make sure it is at the ends where the paper hangs out.  So each child will take home a t-shirt and pretend fortune cookie in their take-out box and also their chopsticks and tea cup, and their flip flops which hopefully they'll be able to use in the summer (be sure to get different sizes!)  That's all I came up with for this one, this was a hard one for me, but I think it turned out pretty well. 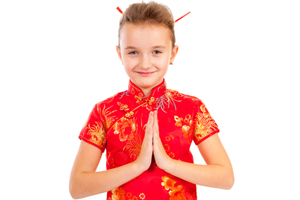