INVITATION:  My husband downloaded a picture from "The Lion King" movie from www.Disney.com.  We color printed it,and used three of the colors from the picture to designate song titles from the movie, party information, and my son's name and age in the wording above the picture.  The wording of the invitation was as follows:   The king of the jungle is Simba, they say?  Well, if you Just Can't Wait To Be King for a day then scurry on down - Be Prepared for a roar as we PARTY and celebrate HAYDEN's big 4!!  Hakuna Matata will be our theme song, so RYAN and MATTHEW and BLAINE hop along as we all flock together and have herds of fun, on a jungle safari of imagination! SAFARI SEASON OPENING:  date THE (OUR LAST NAME) PRIDELAND:  address Circle of Life CYCLE:  time All explorers will need a "lion-sized" spirit of excitement, cooperation and imagination for the "mane" event!  I cut the printed invitations out using scrapbooking scissors and glued them on card stock paper that coordinated with the colors in the picture, then tied a ribbon at the top.

DECORATIONS:  I covered the table with a paper tablecloth and tied the corners to the table legs with colored curling ribbons to keep it from moving.  I used a second (different color) paper cloth as the table runner, with the cake serving as centerpiece on top of a couple of hidden trays to add a little height.  I loosely bunched up the runner, and tied the two ends of it with curling ribbon, as well.  Each boy had his own personalalized (and laminated) placemat, which I made using a different downloaded movie picture and colorful construction paper.  I bought "Lion King" paper plates and plain (colored) napkins for the lunch and cake and used our brightly colored sippy sports cups for the drinks.  I blew up several balloons and hung them from light fixtures in the family room and kitchen, and all up the bannister.  I also played music from "The Lion King" in the background, but loud enough that the boys got excited by it.

CRAFT:  I pre-cut four long crowns from yellow construction paper, and used glitter glue to write each boy's name on the center of his crown.  I also added a small amount of glittery decoration on the points of each crown.  The rest of the crown was blank, and the boys were given tons of stickers and washable markers to use to decorate their own crowns.  (One of the guests was my other son, a two-year-old, who could do this, too.)  They each decorated their crowns, and then we stapled the ends together to fit their heads.  (They each got to be "king for a day" as the invitation stated".

ACTIVITY:  Safari around the house.  On my kitchen island, I placed a backpack filled with four items to be used on the safari, a map, and four pairs of homemade binoculars.  The binoculars were each made with  two toilet paper rolls covered in cheap leopard-print fabric, stapled together in the center, and yarn taped to the inside to wear around the neck.  The map was made from a grocery bag with markers and burned edges, and tied up with twine.  I wrote a rhyming poem to take us from place to place to explain what we would do at each stop, and we began, wearing binoculars to look for the signs that coordinated with the map pictures.

We followed the map to the dining room (Pumbaa Pointe), where I had made four tribal faces using grocery bags, markers, glitter glue, cardboard boxes and paint sticks.  The faces were each a simple oval shape with ears, black rectangular shaped eyes, large black oval mouth, red traingle point on the forehead, and glitter shapes and various lines on the cheeks.  I glued each one to an oval shaped cardboard piece for sturdiness, and used packing tape to tape the paint stick on the back.  Each boy got to use the plastic canteen (backpack item) to pretend to give a tribal guy a drink, and then the tribal people were so thankful that we all "danced" in celebration.

For the dance, each boy was allowed to choose two of my daugher's baby rattles from a woven trunk, and we shook them and danced around for a couple of minutes to loud music - appropriately titled "Tribal Dance" by the group Two Unlimited.  We then traveled to the living room (Timon Tunnel), where I used a couple of small tables covered with blankets between two loveseats and the boys took turns using the flashlight (backpack item) to crawl through the tunnel.

Next was up the stairs (Pride Rock) to tiptoe past some hungry lions (stuffed animals) and take their pictures with the toy camera (backpack item).  Then up to our master bathroom (Simba Swamp) where I had filled the tub with water, and the boys each used a fishing pole (backpack item) to catch play fish to feed to the hungry crocodile (son's stuffed animal).   After the safari, we played a take-off of musical chairs to the movie music, but the "loser" from each round had to act like an animal the next round - no child was ever eliminated from the game.

PRESENT OPENING and FAVORS:  We downplayed the present opening by immediately following it up with my son handing out the party favors.  I used four plain colored gift bags decorated with curling ribbon and their names to each hold one med sized stuffed Simba, and two edible treats.  Each boy got one "Safari Mix"(actually chex mix), and one "Lion King treat" (Lion King animal crackers.  Both treats were placed in small rectangular plastic recycled Gerber baby food containers and wrapped with curling ribbon.  Each boy also got to keep his personalized placemat, homemade binoculars, personalized and decorated crown, a balloon and a tribal face/mask. 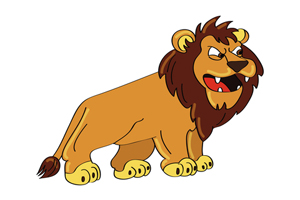