For my daughter's first birthday, February 2003, I used a French theme because her name is Madeline and she was conceived in Paris.  I received a ton of great ideas from this website and adapted them to work with my party.

The first thing I did was make my own invitations.  The colors I chose were "pink and white", so first I found a great graphic of the Eiffel Tower and printed it out on vellum paper, the invitation said, It's Madeline's 1st birthday!  Please join us in Paris, etc.  I used "rue" for street, and it said to "Respondez S'il Vous Plait", I also addressed it to "Mademoiselle" or "Monsieur" so and so.  I believe I received this idea from this website!  Then, I trimmed the vellum, put it over pink cardstock paper, and put a pink and white gingham ribbon through the top of the invite.  I put it in a clear vellum envelope and put a French sticker on the front which I found at a scrapbooking store.  Everyone thought the invitations were beautiful.

For ambience, I bought the French flag and hung it in the front yard, balloons, played a French music c.d., a birthday sign, postcards from Paris were on each table, I printed out famous artwork from the internet and displayed them outside, and I also painted an 8 ft. Arc de Triomphe and Eiffel Tower on the wall using an overhead projector.

We were going to start remodeling out kitchen so I didn't care about painting it on the wall.  I also purchased fresh flower nosegays, pink roses, freesia, lavender, and pink gerber daisies.  The food table had a huge Eiffel Tower replica centerpiece which I found on a French website.

The cake was bought from a local bakery that made my wedding cake. It was pink and three layers tall.  The cake was decorated with a picture of a poodle, lavender flowers, the Eiffel Tower, and my daughter's personal cake had "Madeline" on it.

For entertainment we rented a bouncer, hired a balloon artist, and an artist to do caricatures.  I also had my husband build an extra long easel where I hung white paper and set out paint for the kids.  We played "Place the French flag on the Eiffel Tower", I printed little flags on white labels, then painted the Eiffel Tower for them to place it on.  The winner won a plush poodle.

For favors the children received a gift bag that said, "Merci" and their name.  It was filled with Crayola crayons, markers, colored pencils, glitter glue, and scented play dough.  Older girls received French lip gloss and tissue with French designs, adults took home leftover bottles of French Lemonade and baguettes.  I spent a ton of money, but it was so worth it because I love to entertain.

All the guests said I overdid it, but it was so fun to plan.  Anyway, I really wish we could post pictures so that we could show each other our ideas in detail.  Moms also said it was a unique theme, and a great idea.  Merci! 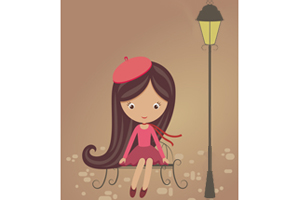