Monster Mash Party - Who Am I Game

INVITATIONS: On white cardstock, I printed out, Eye hope you can make it to _____ Birthday Party! with all the information below. I also added a small picture of a cartoon monster that I just copied and pasted from google.

DECORATIONS: I had two theme colors, purple and teal. They can be anything, but I suggest two or three of these colors: Orange, Yellow, Dark blue, Dark Purple, or teal. I hung streamers and a few black balloons. On the wall right outside, I taped a teal monster I had cut out of cardstock and added white paper eyes and teeth to. The party table had a plastic teal tablecloth, and in the middle of the table was a cupcake tree with cupcakes and purple napkins fanned out all around it. I had monster lollipops (Oriental Trading Company) on the purple napkins. You can also put the lollipops in a mini bucket with Styrofoam in it, sticking out. I also cut out huge paper eyeballs and stuck them to the wall with tape. On the black balloons, I took a silver sharpie and drew monster faces on them.

ACTIVITIES/GAMES: I had two different ideas for a scavenger hunt. I chose the first one, but the other one seems to be a more competitive game.

#1: Googly eye hunt- I taped googly eyes all over the house, and if you found one, you put it in your goody bag. Whoever found the most wins a small prize.

#2: Make a monster scavenger hunt- Draw out a simple cartoon monster with one eye, two arms, two legs, and a body. Make two copies, then cut out each body part. Hide each item.  Divide guests into two teams, and tell them to find the body parts, but they can only get what is on the list (if they run into another team’s part, they must leave it there). I played Just Dance- a Wii game, that has the Monster Mash song, and you can dance to it. (this is only for Wii owners). (here is an activity for older girls only) We painted our nails like eyeballs- First do a coat of white, Then add a big black dot in the center of the nail, then add lighting-like streaks of red around it.

We also played Who am I?, a guessing game. I taped a different well-known monster on the back of each of the guests, and everyone walked around, and could only ask Yes or No questions about their monster (is it a cartoon? Is it green? Does it have one eye?, etc.). Once they guess it correctly, they can take it off and still help the other people. We watched Disney Pixar’s Monsters Inc., an adorable movie!

After that, we played a skit game- divide the guests into groups of 2-4 and give them each a bag filled with five random items from around the house (a hat, telephone, flashlight, Rubix Cube, scarf, scissors, gloves, calculator, sunglasses, etc.). Each team must then make up a skit that has to do with monsters. Three judges will judge how good they were. The best one earns a prize. At the beginning of the party, we made monster magnets that I got from Oriental Trading Company. We had fun and didn’t use the directions, which is better for an older group.

FOOD: For the cake, we made monster cupcakes. We used the idea from TasteofHome.com (search green-eyed monster) and used different cake frosting tips to create fuzzy, frilly, and spiky monsters. They were really easy and cute. We also had the monster lollilpops. Then, we had normal party snacks set out- Cheetos, Lays, lemonade, Sierra Mist, etc. If you would like, on m&ms, you could add a little dot of frosting in the middle to look like an eyeball. I didn’t, but if you want, you can make fruit punch in a punch bowl, and put gummy worms in it.

COSTUMES: I didn’t do costumes, but here are a few costume ideas:

FRANKENSTEIN: Cut up a white tshirt (you can wear a tank underneath) to look torn and worn. Do the same with some brown sweatpants. For the face, you can put on a store bought mask, lots of makeup, or you can make your own paper mache mask. Wear long green gloves and knee socks. MUMMY: Draw black lines with sharpie on a plain white tshirt, and cut up parts to look like you are wrapped in cloth. Do the same with white sweatpants. Put on white face paint or a mask.

FAVORS/PRIZES: These can be any small themed doodads. For prizes I gave away notepads and monster spring pop-ups (Oriental Trading). For Favors, you can do the same in a decorated bag.

EXTRAS: On playlist.com, I made a monster playlist. Here are the songs I included: Monster Mash, Flying Purple People Eater, Thriller, C is for cookie, Ghostbusters, Monster in the Mirror, Addams Family, Scooby Doo, and Ghost town. 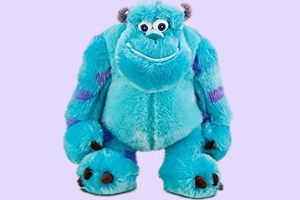