My son for his 5th birthday wanted a Teenage Mutant Ninja Turtle party.  His birthday falls in January so it has to be an inside party.

Decorations:  We had lots of green and black balloons, also grey and green streamer. I painted a sewer scene on a huge open cardboard box with ooze and little turtles walking in it.  I also drew and painted a poster of Shredder that was to be used in one of the game.

Games:  When the kids arrived, I had some TMNT coloring pages to keep them busy until everyone had arrived.  Once everyone was there, my husband rang the doorbell from the side of the house and the kids found a pizza box waiting for them at the from door.  We brought it in, and inside was a letter from Master Splinter, warning them that he had heard that the mean Shredder was planning on attacking this house so they had to prepare themselves to face him.

So he first ask them to prove themselves worthy of being a Ninja and send them around the house on a treasure hunt.  Each kids had to find 8 pictures hidden around the house and place them on a bristol board with their name and an example of the picture they had to look for.  I had printed those pictures from the net (some were Donatello, some Leonardo, some Michelangelo, some were Raphael, some were April, etc.).  Kids love this game because it's not competitive, they all win once they all have found their pictures.

Of course, Master Splinter was quite happy with how well they did so he now told them how to transform into Ninja turtles.  They all took turns going behind the sewer carboard poster, were they had to drink 'green ooze' (green Kool-Aid), and were I would give them a Ninja Turtle mask and a Ninja belt of a matching turtle color.  Then they would be introduced to the others.  The kids love that part.

Then as Ninja Turtles, they had to know how to make pizza.  So we set up to make individual pizzas.  Each kid receive a greek pita on an aluminium plate with their name already written under, which made cooking them and keeping track of who's who easy.  They made their own pizzas.  While the pizzas were cooking, it was time for the next game.

The kids had to practice their Ninja moves by using a Donatello Bow stick to break a Ninja Pinata.  I bought a regular pinata stick and removed the paper on it, and used purple and black streamer to make it look like Donatello stick.  I couldn’t find a Ninja Turtle pinata, so I bought a yellow round one and decorated it as a Ninja head with streamer paper.  All I did was use green streamer paper to cover it all.  Then I used some blue to make the mask part.  And some white for the eyes and mouth.  Of course, Master Splinter had warned them he didn't want anyone hurt during Ninja practice so the kids not practicing their moves had to listen well and stay sitted away from the pinata.

It was now time for lunch.  Each kids received their pizzas their own little pizza box (a friend works in a pizzeria so I received them for free).  I had printed some Ninja Turtles Pictures from the net once again and used them to decorate the boxes.  Beverages was, of course, green ooze/juice!

For the next game, I had hidden little keys in green ooze (you can buy canister of ooze at Wallmart, but it often also come with the figurine).  My son had received a nice little Ninja Turtle box at christmas with a little lock and key.  So every kids received a canister of ooze with a key, but only one of the key would open the treasure box.  I told the kids inside the box was Ninja stars that were needed to defeat Shredder.  Each star had velcro on it, and on the Ninja belt the kids received earlier there was velcro too so the kids could wear their star on their belt.

Once everyone had their star, then it was time to defeat Shredder.  I had made a big green dice by covering styrofoam with green felt and added red numbers made out of felt dots on it. The number 5 or 6 instead of being made with dots were made with 5 and 6 felt stars.  On the Shredder poster I had painted on a Bristol board, I had put little pieces of velcro that would match the Ninja Stars the kids had earned.  Each kid took a turn rolling the dice, and if they got a 5 or a 6, they were allowed to place their stars on the Shredder poster.  If they got a 1 to 4, Shredder had hit them and they were injured so they had to wait for their next turn to try again. Of course, the Ninja Turtles are a team, so we needed everyone's star to defeat Shredder.

The kids really loved this game and were cheering hard for everyone to win!  They were so exited when they won!  After their big win, they received their own Numchunku.  I bought them on sale after halloween, made of a soft styrofoam and plastic, and covered them in red, purple, blue, and orange fabric to ressemble Michelangelo numbhunku.  I told the kids they were to pratice their move and not to hit each other and they listened well.  Then it was time for cake and gifts!!  The kids had a wonderful time, and the parents that stayed really enjoyed it too.  It was a lot of work in preparation, but well worth it, when I saw their reaction to it. 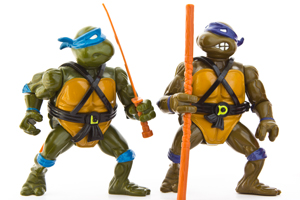