Clue birthday party sleep over for my 12 year old and 9 friends.

INVITATIONS:  We're simply dying for you to join our game of Clue; To solve the mystery of who killed who.  Who?       Please dress in character and create a name; associated with the color ____to play the game.  Good or evil, woman or man, please no athletes; be as creative as you can.  Where?   Sweet Mansion Your address  When?   Date and time (should be dark out).  RSVP with your character name by ____ to phone number.  Dinner will be served.  Don't forget your sleeping bag.

This was lined up nicely and put on red cardstock.  Everyone was assigned a different color to wear.   Invitation was put in a 6X9 brown envelope like the one from the Clue game.  On the computer we created a red question mark with invitee's name inside in white, the word Clue and CONFIDENTIAL.  They printed out very similar to the game Clue envelope.  When the families RSVP'd with their character names (which were quite creative Ms. Pika Chu, Sleeping Bluety, Frenchy Noir, I asked them to email me a photo of their character so I could blow it up for the Wall of Suspects i.e. Ms. Bubble Gum was pink and her picture was of her in a pink hat and clothes blowing a big bubble.

COSTUMES:  The kids came dressed in their colors in character i.e. Ms. Tara Cotta was a movie star all in brown and carried a small dog.  The kids really enjoyed creating their own names and characters.

DECORATIONS:  I wrote Dining Room, Library, Bathroom, Laundry Room, Theater, Hall, and Kitchen on black pieces of poster board in white chalk, circled the name and hung them above the entrance to each room.  I draped red and black tulle around the entrance to the Dining Room and Library.  A CD playing Phantom of the Opera music was playing when they entered (borrowed from library).  The dining room had twisted black crepe paper from the center chandelier to the outside walls; red table cloth (borrowed red tablecloths from neighbors), glass plates, crystal drinking glasses and black napkins with real silverware.  Black place cards made out of cardstock with character names in silver ink.

Lots of candlesticks with red or white candles.  Another small table was covered in black plastic and held ten 6x9 clip boards with a cover sheet that said CONFIDENTIAL, underneath was the Clue Notes List:  (Characters, Weapons, Rooms) and ten different colored gel pens.  (Don't let anyone including the birthday girl see this list until it's time to play.)  I also took pictures of all seven rooms prior to decorating and laid them on the dining room table and encouraged the kids to look through them so they didn't mistake certain things for a clue.  The Hall had a table with a red table cloth and big candlesticks, a set of dice on sixes, the real Clue game envelope, directions to a game called Guess How Many Bodies in the Body Bag, ten index cards in everyone's color and a small body bag (black trash bag cut to size, taped and flipped inside out) filled with however many Barbie's and other pieces of junk.  I only hid one inside and two of the ten kids guessed it.

On the Hall wall was a black piece of cardstock that said Wall of Suspects.  I mounted their 5x7 pictures on a piece of 12x12 colored cardstock (their color) and made up a little description under each name. (Ms. Bubble Gum has been known to blow the biggest bubbles and stole the gum chewing title from Violet Beauregarde.  She has an annoying habit of chewing loudly and has been caught putting double bubble under the desktops at school.)  Each piece of cardstock was numbered 1-10.  On the floor of the Hall was a dead body tracing (out of electrical tape) with four yellow pieces of numbered cardstock standing up and placed near a bullet, airhead wrapper, tie, and hair.  (Presumably clues left behind from the victim and murderer/ the four clues also spelled out BATH.)  The front door had crime scene tape stretched across it, as did our staircase and doors that I didn't want them to enter.

The Bathroom had REDRUM written in red lipstick on the mirror.  For the Theater,  I hung a set of red sheets (with thumbtacks) from the ceiling to the floor on both sides of the entrance way.   White Christmas lights were lying on the floor to give a gloomy look.  I borrowed scary/murder movie cases from friends and the library and set them around.  Popcorn packages, candy  and small water bottles were on display as well.

The gift table was also in this room as were ten gifts wrapped in red paper for the mystery gift game.  The Kitchen had the favor table covered in red tablecloth.  The kitchen table had a red tablecloth and a sheet cake with question marks made out of airheads (slice them thinly and bend them).  I ran a strand of lights behind the counters to keep it dim in their as well.  The Laundry Room had a rope hung from one door frame to the other and I hung clothes that started with the letter A (Aeropostale, American Eagle, an apron, Abercrombie).

The Library had two dim lights and mystery books (from library) spread all about.  It was also a game type room and I spelled out some words with Scrabble pieces, made the number six with dominoes, layed out a set of sixes, a run missing the six, and on the coffee table I covered with black plastic tablecloth and set out the actual Clue game and put all the weapons out except one (poison).  There were six playing cards for each of the players.  All the rooms had one or two hidden weapons (knife, knitting needles, pistol, rope, bat, candlestick, dumbbell, trophy, and wrench).  Everything was hidden but in easy view.

GAMES:  Before the big mystery game, play the How Many Bodies in the Body Bag game and remove that from the table.  The object of the big Clue game was to figure out that one of the weapons was missing (poison) and that was the answer.   The candlesticks messed up the kids.  They didn't think the lit candlesticks counted so if I had to do it again I would put a candlestick on its side under a table.  Also in each room was an object that didn't belong there (Belt/Dining, Apple/Laundry, Toothbrush/Hall, Harmonica/Bathroom, Razor/Theater, 2 bags of Oatmeal/Library and Marbles/Kitchen).  The children were supposed to write down the objects that were out of place next to the rooms they were in.  If they did the first letter of each object spelled out the place (bathroom).  None of the kids got that.

The ones that chose bathroom as the place did so because they figured out redrum spelled murder backwards.  Just a coincidence, nothing I had intended.  The kids were supposed to pick up on the number sixes and then figure out that number six was the killer.  That was a struggle too.  The only directions the children were given after dinner were:

2) they had to figure out where , with what and who did it

3) nothing could be touched in any of the rooms

7)  if you think you know the answers you must come to me and quietly show me your answers circled.  If you are wrong you are out of the game and you must sit quietly.  (I had the answers in brown envelope and didn't let them look until the very end; I didn't want one kid helping another.)

When they had ample time and most of the kids had guessed, I gave the others a time limit and then went over all the clues.  Two of the kids got two out of three correct and I let them pick a gift out of a pile of prizes.  The other game was the mystery present game.  The ten wrapped gifts were piled in the middle of the circle of girls.  I played music and they tossed a ball.  When the music stopped whoever had the ball picked a present.  They couldn't unwrap the present until the very end of the game.

The next person could steal that present or pick a new one.  Lots of stealing went on and finally they got to unwrap their gifts.  (Girly things like nailpolish, hairbands, loofah, candy, bath gels, lotion etc)  Don't let the birthday girl see any of the gifts.  The last game I showed them a tray of mystery objects and then took it away.  The one who could guess the most correct items won.  They all laid out their sleeping bags, chose two movies and were asleep by 1:00am.

FAVORS:  black lunch bags with a large question mark we made out of cardstock and glued on the front on each bag (in their color) and filled with mystery gum, mystery airhead, and mystery laffy taffy.  They also got to keep their gel pen, and the present they won in the mystery present game. 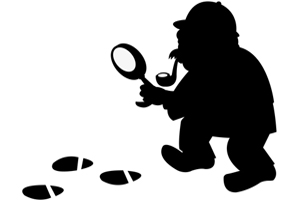