Diva Party -6yr- Awards for Everyone

DIVA PARTY - My 6 year-old decided she wanted to be a diva for her 6th birthdy, because she "had never been one before."

Invitations were purchased, glittery high-heeled shoes.  I made a form, which was included, for the parents to fill out and return with their daughters to the party.  Fill in the blanks:  Stage Name, Favorite movie, Favorite actor, Favorite song.  The girls were asked to wear one of their mom's old bridesmaid or prom dresses.

Deocrations:  white, blue, & gold helium-filled balloons, thin-metal garland with stars, foil stars, extra invitations.    When the girls arrived to the party, they applied their own makeup - eyeshadow, blush, and lipstick.  We gave each girl a pink, feather boa.  A red plastic tablecloth (dollar store) was folded in half lengthways and placed on the floor for the red carpet entrance.

Each girl was announced from the form they brought with them (if they didn't return it, we made one up), "And, here is "stage name" who recently starred in "favorite movie" with "favorite actor."  "Stage name" is up for an oscar for her role in that movie.  She is also known for her number one single, "favorite single."  Each girl had their photo taken on the red carpet.

After the red carpet entrance, each girl was given a funky pen with an autograph book.  There were so many stars in the room that you just had to have all of their autographs!  After the diva autograph session, each girl was given an opportunity to sing her #1 song karaoke.    We then broke for "champagne" (7UP) in plastic champagne glasses.  We made a toast to the birthday girl.  Then it was time for cake with lipstick candles and ice cream.  When we replaced the birthday girl's name in "Happy Birthday," with "dah-ling."

The forms the girls brought with them were each placed in an envelope and sealed.  While the girls were eating cake and ice cream, I then wrote different oscar categories on the envelopes, "Best leading actress," "Best animated actress," "Best Diva Attitude,"  "Best diva attire," enough for each girl to win.  Paper dolls with stands were purchased, which served as our oscars.  We had our own oscar awards presentation, "And, tonight winning the oscar for "category from envelope," drum roll please (the girls pat their legs with their hands), "stage name" in "favorite movie."

Photos of each girl were taken as she accepted her award.  These paper dolls were part of a craft kit.  The clothes that came with them were white covered with a film, which upon removal became a sticker that they could sprinkle different colors of glitter sand on.  (These came 2 to a pack from a dollar store.)  After the oscar ceremony (and the kitchen table was cleared of plates), the birthday girl opened her gifts as the other girls decorated their oscars clothes.

Once all that was done, we went back to the living room so the birthday girl could give the divas in attendance a gift from her (a plastic purse, with metallic diva sunglasses, necklaces, bracelets, lipstick candy).  We took several photos, but the group photos of the divas in their boas, sunglasses, & lipstick were best.  And for the photos, we never said "cheese."  We said, "Dah-ling!"  Before we knew it 2 1/2 hours had passed and the parents were there. 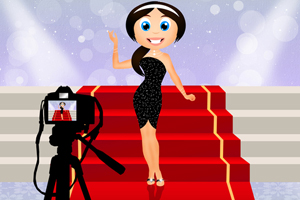