My children really love the virtual world of Club Penguin (CP), so, for my daughter's 11th birthday party, we decided to bring Club Penguin to life in our back garden. The children arrived half expecting to be sitting in front of a laptop for the afternoon, but they really enjoyed the physical nature of the activities. You need a decent amount of time for this party. We had a group activity (a mission) followed by a pairs activity (decorating igloos), but it was important the children had time to play. The party was three and a half hours long, which was perfect (for us! Some of the children could have carried on for another few hours). Although children that have played on CP are likely to get the most from this party, it's not essential that your guests are familiar with it. The organizer should, however, have played the games and completed a few missions at least (it counts as essential research!). You do need a few adult helpers for this, especially for manning the gift shop.

INVITATION  If you want to invite someone to meet you on Club Penguin you send a postcard. I photoshopped a screengrab of a CP postcard and used an internet photo gift service to make postcard invitations with the details of the party on the back.

DECORATIONS I bought igloo tents cheaply from Ikea and set them up on the lawn. The igloos could fit two children comfortably, so we had one igloo per pair of children (we had six igloos). I downloaded a font that is very similar to the one used on CP and made a PLAY NOW sign for the front door and a Pizzatron sign for the kitchen. We also had a Ski Slope, Ski Lodge and an Aquafishing area (combination of the fishing game and aquagrabber). Inside we had one room designated as the Gift Shop which also doubled as Mission HQ. We streamed CP music for ambience. In an ideal world, I would have had plenty of fake snow, but the budget didn't stretch to that.

ACTIVITIES I ordered some smiley-face pins and hid them around the garden (near yellow flowers or objects, so that the children had to communicate with each other and work out where to look). Then we had a secret agent mission. My 8-year-old son played G, who directs missions on CP (his part was carefully scripted, and he has all the instructions on a clipboard). He showed the agents a short video we'd made of Herbert P. Bear (toy polar bear) saying that he had kidnapped the puffles (puffles are fluffy pets on CP). Also on the video was the information that Klutzy the crab had let out the baby puffles from the nursery. The children had to find Klutzy (plastic crab perched on a windowsill), whereupon we unleashed a series of small bouncing balls onto the patio which the children caught in fishing nets (our version of Puffle Round-up). They took it in turns to do this in pairs and it worked surprisingly well. Once all the baby puffles were captured, they had to be fed. I had made cards featuring the different types of sweet pizzas you get in the Pizzatron games. Everyone had a turn to see how many pizzas they could make in one minute. We had bowls of pink and chocolate icing, sprinkles, chocolate chips, and liquorice laces. Messy, but the kids loved it. Next, there was a call (on the birthday girl's new phone!) from G, saying a coded message was rumored to be in the ski lodge (the summer house). We used the tic-tac-toe code from CP to make a letter from Herbert saying something to the effect that the penguins would never find the puffles without a metal detector. G declared the detector lost so they rushed around looking for it (hidden in the garden -- cheap one but it did work). They used it to find where I'd buried a tin, full of puffles (we'd spent weeks making biggish fluffy pompoms with big googly eyes stuck on them and with red ribbon leashes). Once the puffles were found, the mission was declared a success and G handed out plastic medals to everyone.

GAMES After the mission, the main part of the party was taken up with decorating the igloo tents. I also ordered some cheapish decorations from party supply sites: some plastic flamingos, flower garlands, Chinese lanterns, stickers from an arctic scene setter, etc. We also improvised with small tables made from boxes or upturned square baskets. We set up a paddling pool and coated the bottom with sand and shells. Then we added coloured paper clips and iron balls (from a geomagnets set). I had made a Better Igloos catalogue modeled on the one on CP which showed what you needed to buy various items. The kids used bamboo poles with a magnet on a string to fish out the combinations of paperclips and pearls to buy the decorations from the gift shop. (This game is meant to be a combination of aquagrabber and the fishing game.) There was a rule of one item per fishing expedition to prevent the goods going too quickly. We also set out a ski slope (we have a steep garden) using a plastic shower curtain cut lengthways and pegged out. We put toy penguins in small plastic crates to serve as sledges and they children could race them down the slope. In the Ski Lodge (summer house), we set up a couple of games of Find Four. The kids could also play again the bouncy ball version of Puffle Round-Up and make sweet pizzas as described in the mission.

COSTUMES I was lucky to come across T-shirts with a big penguin on the front at Primark, so I bought one for each child coming to the party. We initially planned to decorate these at the party, but given that glue and fabric paint takes time to dry, I sent these out in advance and asked the children to wear them already decorated when they came. This worked really well  they all looked fabulous. If you can't find ready-made T-shirts, T-shirt shops will print to your own design, and you just need a plainish penguin on the front. Mission director G wore a lab coat and some big glasses. His sister wanted to paint his face blue but he was not keen! Another route with this is to make costumes and wigs available and have the children buy them with the fishing currency. However, costs can be prohibitive.

PARTY SNACKS The mini-pizzas made from rich tea biscuits with icing and toppings (described in the mission) were some of the snacks. We also had the children made their own proper pizzas with pizza bases and various toppings to add. There were also puffle cupcakes. We used coloured butter icing for the cupcakes, then white chocolate buttons for the eyes and used black writing icing for the smiles and the pupils of the eyes. We used candy floss (cotton candy) to make puffle hair, but this absorbed moisture from the icing and wilted into a sticky, hard mess. The icing has to dry before you add the hair, and it should be done at the last minute.

CAKE I made a round cake and an extra loaf. I cut up the extra loaf to make pieces that we arranged on one side to suggest mountains. The whole thing was covered by a pre-rolled round sheet of royal icing (very easy). We then made an igloo from sugar cubes and sprayed it pinkish with edible spray. We also sprayed the mountains purplish. We made squat green trees from green sugar-paste. The penguins could have been made from icing, but my daughter preferred some fluffy little ones I'd ordered from a craft site. We arranged these on the cake round the igloo, and added some piles of silver balls which suggested a snowball fight. We surrounded the island with blue cotton candy and set the candles in icing snowballs around it.

FAVORS I used plain coloured paper bags and decorated them with a penguin card-topper I made from sheets of white foam and black card with googly eyes. Inside, I had a penguin biscuit, a penguin key ring, and a few other little penguin bits and pieces I'd ordered around Christmas time (when penguin crafts and toys tend to be easier to come by). The children also took home the pin they found at the start of the party and their pompom puffle. We also allowed them to choose any decoration from their igloo to take as well. 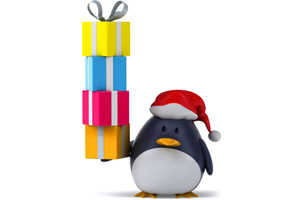