Typically a theme for boys my daughter loved the idea of a Pirate Party for her 4th birthday. Thanks to the great ideas I collected from this site and some of my own. We had a fabulous party.

The INVITATIONS: I found a treasure map on familyfun.com and I printed it on to white paper on the other side I had my party info: Ahoy Mateys!! Shiver me timbers... There's a party going on Captain (Your child's name) Invites ye to board her ship at (Your address. Write out each number ex. Thirteen Hundred and Sixty five Palmer Drive) Saturday, The 16th day of July in the year of me Lord Two thousand and five  Jacob's ladder will be lowered for boarding at 11:30 am Aye we does regret that any children left after 2:00 pm will be sold as slaves at the next port. All ye lads and lasses come for some swashbuckling fun, grub and kiddie spirits. Avast! It be requested that ye smartly contact the coxswain, (your name) at (your phone number) to confirm ye desire to excercise your sea legs and search form mighty treasure! My daughter wanted me to read her invite over and over. She loved it.

I used a font called Vivaldi, it looked piratey. (Also the coxswain is a person who steers the boat.) After I printed on both sides of the invite I tea dyed the paper. (I don't know if computer ink works the same, but I had used copier ink when I copied all my invitations. I did not have a problem with smeared lettering) To tea dye get some hot water and put your tea bags in the water, depending on how dark you want your paper add more tea (darker) more water (lighter)put your tea in a dish that can hold your paper flat. I crumpled my invitations and then unfolded them and laid them in the tea submerged it for a few seconds make sure you get it in all the crinkles then take it out and lay it on some paper towels on a cookie sheet. Let completely dry. I then burned the edges.

I also went one step further by rolling the invites and tied them with a piece of jute string. I left some string on then end and put them in a empty plastic water bottle (24oz arrowhead bottle)I poured some sand and some small craft shells from Oriental Trading Co in the bottle. I hot glued one end of the string to the bottom of water bottle lid that way when it was opened the invite came right out. We hand delievered most of the invites, but I mailed a few of them. Put a label on the bottle with an address and return address. Tape the lid with some packing tape and you can mail the bottle just like that.

Decorations: I made a poster that said Beware of pirates and I traced a skull and crossbone symbol next to it. I used the same lettering that I had used on the invite. I chalked it brown and burned the edges.I hung that on the gate that the kids came through, next to the sign I had a skeleton hanging. I found some pirate heads cutout at a party store and hung them around. My center piece for my table was a ship I had a four foot piece of wood that was about 5 inches wide and about 4 inches deep. I drilled 3 holes for dowels and I took 3 full size white poster boards and made sails. The middle sail I attached a plastic jolly roger flag to the top. On the two other sails I put a 8 1/2 by 11 piece of cardstock for some small sails. I placed my ship on a blue plastic table cloth. It looked fantastic.

I was going to leave my cake next to the ship during the party, but it was too hot outside and my cake would of melted. My eating tables had plastic red table cloths and I had red and black balloons everywhere. I had black plastic utensils and blue paper plates. I bought some paper cups and napkins with a jolly roger symbol at a party store. Throughout the party I had music from Disneyland's Pirates of the Caribbean ride playing. The cd is called Haunted Disney. It has a few versions of "Yo Ho A pirates life for me" the music is a little more light hearted than the actual movie soundtrack.I then made my own cd of just the pirate music so it would play over and over. It was great when you could here the pirates talking and shooting the cannonballs at the ships.  I gave each child a red sash to tie around their waist when they arrived then they went to make the craft. My mom came to help dressed in black capris and white top with a red sash tied around her waist.

CRAFT:  Days before the party I had premade the craft to cut down on time and keep it easy for four year olds. The kids just added the finishing touches. I made a toilet paper roll parrot, but I added a piece of elastic stapled to the bottom so each child could where their parrot throughout the party on their shoulder. With adult supervison the kids hot glued feathers onto their parrots.I got the parrot pattern from  dltk-kids.com I copied the pattern onto colored paper and assemled them. It was perfect for them. The kids thought the parrots were great. If the parrot would fall down they wanted it fixed right away.

GAMES: I worried about competition and that someone would feel left out. Some four year olds can't handle it. So we play simple non competitive games PIN THE PATCH ON THE PIRATE. I laminated the pirate head cutouts and used one for the game. I made my own paper patches, but you can use the plastic ones.Then the received their own eye patch to wear.

WALK THE PLANK. I had a 2 x 4 plank that I put over a plastic pool. A 3 foot plastic alligator floated around in the pool waiting for someone to fall in.After their walk I gave them a paper pirate hat.

POP THE CANNON BALL. I had black balloons and the kids raced across the lawn to sit and pop the balloons. Most kids bounced right off of the balloons.It was hilarious. We did this a couple of times or until all the balloons were popped. Then the kids helped pick up the balloon garbage. I made paper towel roll spyglasses and handed them out. (Easy version spyglass dltk-kids.com)They could stick them into their sash to hold them or you can by premade spy glasses.

FOOD: I had a light lunch for the kids with kid-friendly pirate food. Golden Nuggets, skeleton bones, pirate's teeth, red rubies, cannon balls and kiddie spirits. I found it easy to dish the food up for the kids and serve it to them.

My cake:I made the treasure chest cake from familyfun.com. The instructions say edible treasures. So I put a few rolo candies and candy bracelets and necklaces, but I use plastic necklaces,coins and rings to make it sparkle.I put a candy bracelet or necklace on each plate when I served the cake so there would not be any crying.My daughters eyes about popped out of her head when she saw it. She loved it. I have not made that many cakes before, but I was impressed with myself on how well it turned out.Hint freeze your cake before you frost it or cut it into shapes it works a lot better and it's easier to pick up and assemble.

Treasure Hunt: After the cake and presents I told the kids I had found a map near the ship. (I had outlined the same map that was on their invites on a big brown paper and burned that. I oringinally had clues, but I was getting really hot so I opted not to use them and we just followed the map using landmarks.) We started at the ship, then went to find something that lurkes in the water,(the pool with the alligators) mermaid lagoon, (I had two Ariel mermaid dolls sitting on some rocks in the yard) Skull rock,

We looked for  skeletons and finally a deserted island. I had blocked off the deck so they couldn't see my island that I had made. I had made some palm tress for a previous party out of carpet rolls so I was really excited to use them again. I had a small grouping of palm trees and a blue tarp. I pour sand on the tarp and arranged a 5ft plastic skeleton dressed in a kids pirate costume, patch and hat, leaned the pirate next to a palm tree and put his arm around a treasure box. Then I took seashells, starfish, jewels, necklaces and coins all around in the sand.

The loot inside the treasure box was already divided into indiviual black bags. My mom made some fabric bags then I ironed on a jolly roger symbol(I made the iron-on, myself with clip art and computer iron-on paper you can find at Walmart or a office supply store if you want to iron-on to black fabric print your picture on the iron-on paper,put wonder under on white fabric first then transfer your picture to the white fabric then cut that out, peel off the back side with wonder under then iron that on to your black fabric) and I threaded a red ribbon for the drawstring. I filled the bags with their own pirate map, jolly roger flag, bubble gum coins, rolo candy, 2 pirate tatoos, necklace,jewel ring, ring pop and 2gold coins. They looked awesome. Thank goodness for Oriental Trading company. I got most of my goodie bag stuff and my skeletons from them. It's hard to find stuff for a pirate party in July.

The kids went nuts when the saw the pirate skeleton. They could hardly contain themselves. My daughter had not seen anything before the party she was so excited that they had found pirate treasure. The look on her face was priceless. Although it was a lot of prep work, the party was a simple plan, or at least it started out simple, but I like this kind of stuff.  My outline of the party went like this children arrive, receive a red sash, make parrot craft and play pin the patch on the pirate, receive eye patch.

Everyone had a great time.  One mother told me the next morning that her kids had so much fun that they wanted to sleep with their pirate gear on. My daughter brings up her party everytime she sees a parrot or anything with a pirate. She says it's just like mine!!! 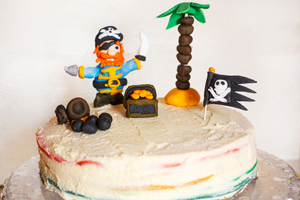