\*~\*PIRATE PARTY 10YR\*~\*For my sisters 10th birthday she had an all girl pirate party. Heres how it goes if you need some help planning: PREPERATIONS> Paint a couple pieces of paper black and draw skulls and crossbones on them, then hang them around the room. You can also place pirates of the caribean posters and decorate the foor with "sand" (just pieces of brown confetti). You can also place shells around the ends of a table to hold the tye dyed tablecloth down. It would  be better if you rented out a spare building, and we were lucky because there was a building we could rent out and use right by the cities waterpark.

INVITATIONS: They were seperate pieces of white paper, and my sister drew a map on the back. It was like a treasure map but your destanation was a big X. For example, our party was held at the water park, so we drew a dotted line going around the page then we drew obstacles such as SNAKE PIT< DEATH CANYON< SINKING SANDS etc. Type your information in a fancy font on the other side, asking them to wear pirate costumes.  Crumple the paper up and paint it LIGHTLY brown and/or (optional) scorch the edges. Roll them up and tie a string around the middle so they look like authentic treasure maps.

GAMES: As the guests arived we started crafts. There were two centers, one to make your own mini treasure chests (get small wooden boxes at Doller Store with More and glued painted differant sized pasta or shells on in a pattern) Another craft is tye dying bandanaas. My sister really wanted authentic dye, so we went to Wall Mart and bought some cheap white material and three colors of dye. At the party, they tye dyed bandandas with my mom and dads help, of course. If you would want to spare the messy dye, buy some fabric markers at Staples and draw designs on the material. We did the crafts as the guests arived, so they didnt have to wait for everyone to come.

Once everyone was there and had finished their crafts, we started the games. As the bandannas were drying, we played a few inside games. One was chicken fight, where two contestents have to hold one leg up with both hands and hop around on one leg. They have to try to bump into each other, to make them loose balance without letting go. They found it really fun, and it looked HILARIOUS.

Another was swab the deck. One person (me) was the captain. I gave commands and the girls had to folow them. For example some commands are SWAB THE DECK: They had to get down on their hands and knees and pretend to scrub the floor STARBOARD SIDE: Run to the right side of the deck (building) PORT SIDE: RUN to the left HERE COMES THE CAPTAIN!: stand very still with out moving in a salute MAN OVERBOARD!: find a partener and grab onto them And so on and so on. You can make up more actions out of pirate slang, just make sure they are VERY CLEAR on them before the game starts.

This is how it goes: The girls have to do exactly what i say for example if I say STARBoard Side! They would run to the right side. But if I say HERE COMES THE CAPTAIN! right after(before they reach the other side), they have to stop arubtly in their tracks and do that action. People who continue doing the same action as before are out of the game. The game goes on untill one peson is left, who is named the first mate.

The last game they played inside was mutany. It is like a reversed hide-and-go-seek. One person is the captain, and they have to hide somewere in the building. Everyone else is the crew and one person is named first mate. The first mate and the crew have to think up a way to capture the captain before he runs back to his post (a place in the building. You could hang a pirate flag over it to make it more noticable) The captain is given time to hide as the crew think up their plan.

When the crew yells, it signals the start of the game. They have to search for the captain,  but the captain gets to sneek around trying to stay out of the way of the crew. If the captain sneeks/runs back to his post before the crew tags him, he wins, however if the crew tags him the the First Mate is now named captain and the game starts all over again. When they are finished with that game, the girls all came outside. I was busy hiding things for a treasure hunt while they played mutany (no pirate party is complete without a treaseure hunt is it?) I divided them up into two teams, and gave them a list of three things to find. The list looks a bit like this, without the brackets:

Find: One round rock painted yellow (hidden by the lake around the water park) blue sand (hidden in the sand box, just sand with food coloring) The last item is a clue: "BANG! BOOM! BASH!" those are the sounds you used to hear from me souring out into the crowd though now I am only dry and empty although I used to be filled with loud Go there to find your next clue! (the awnser was an old bandstand. The next sheet like this was hidden there)  There were three sheets and the last one led back to the building, where I checked their items. If they were all there, I gave them a clue on how to find the treasure chest(buried in the dry part of the park)The first team to find it, not only got first dibs on the prize, but had the loosing team serve them lunch!

LUNCH: We ordered in pizza, and had the girls choose what kind they wanted. We also had the normal pop, exept we mixed all three kinds together in punch to make pirates brew. It looked discuting (root beer made it brown) , but they loved it! As far as the cake take a yellow cake mix and bake as the instructions show. After it is cooled, cut in in half horizontaly through the middle. Round the top half off with a knife (cut off all square edges)crumple the scraps and set aside. Frost the bottom of the cake with brown icing, and run a fork throught the icing lightly to give a wooded effect.

Place candies such as candy necklaces, ring pops, and chocolate coins around the top edges. Frost the rounded off the top half the same way. Add m and ms for nail heads . Place on top of the botom half. Place the whole thing on a rectangular piece of cardboard, and place candies around it as well as crumbled parts of cake to serve as sand. You may only want to put a sparkler on the top of this cake. After lunch we did a couple more party games before their parents came to pick them up.

WIND DOWN GAMES: We played one more rowdy game, an obstacle course. Point out about five obstacles on a course and tell them to go through them. To give pirate themed obstacle course, we had a rope climbin juncle gym so we had them climb to the top to get the rope, and capture a captive (other party goer) and tie them to pole with the rope. Then they were supposed to attach one of my moms exercize ancle weights to their feet and limp over a bridge. Then run to the finish line. The fastest one to do this won.

While we were waiting for the parents to come, we played murder, but changed it around to fit the theme. Instead of getting an eye if you’re the murderer, they got a skull and crossbones. One person was a detective and got the sword, while everyone else has to get a blank piece of paper. The detective goes out of the room and the murder has to wink at someone. The victem screams and pretends to fall down dead. The detetive then comes running into the room. The murderer keeps on winking and "killing" people and the detective has to find out who the murderer is before everyone on the ship is "dead". They played this many times because they all thought it was and awesome game. WE then opened preasents playing spin the message in a bottle.

TREAT BAGS> their treat bags consists of the "loot" from the treasure hunt and the cake and prizes from the game (necklaces, bracelets, earings, lipstick, nailpolish etc.) They put this all in their treasure chests they made from the begaining of the party and wore their bandannaas home.  All together it was an awesome party, and my sister loved it. I think it was a great day to celebrate her going into double digets! :) 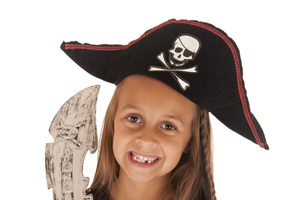