This year for my daughter's 9th birthday we had a simple, inexpensive yet fun-to-do home party. Since my daughter is partially disabled due to mild cp and epilepsy, we chose to do a fun theme of something she likes. She selected "Movie Time Birthday party".

When the children came in, they walked up a red carpet, made from 3 yards of red fabric, cut lengthwise and sewn around the edges.  I bought this carpet at Walmart from the dollar scrap table.  Upon arrival into our home which was festooned with gold streamers and gold balloons, including a balloon arch at the door, made for $25 with balloons and a collapsible balloon arch purchased at a local craft store, each child began their first craft of the party.  Boys and girls alike picked up the black poster board waiting with their name on it.  The posterboard had a large gold star centered on it, with the middle of star left black.

Inside each star, I'd written with a gold marker the child's name. At the bottom, each child used a liquid washable paint to create their handprints. The effect was that of the Hollywood walk of fame. They kids then used various star-shaped stamps and gold ink to finish decorating their posters. While they did so, I placed a feather boa around each girl's neck, and a borrowed toy top hat on each boy's head and took a snapshot of each child.  Then, on to break open a star-shaped pinata. Instead of pre-filling goodie bags, I put party favors and candy in the pinata.

The kids collected all their goodies into grocery store bags, brought them inside and divided up everything evenly. We purposefully placed exactly as many favors as their were children in the bag (of each sort) and made certain that each child had one of each of the different favors.  Some kids ended up with a little more candy than others, but no one seemed to mind.  Since my daughter is unable to get to the ground to pick up the candy as fast as other kids, pinatas can be a cause of stress for her at parties.

Therefore, this seemed the best way to do it, and encouraged cooperation.  Then, back inside, where the children each decorated a foam picture frame with stars and fabric paint.  Boys and girls alike enjoyed this craft. By that time, the pizza arrived and afterwards, we decorated cupcakes, so each person could have as little or as much as they liked of the different types of toppings.

Finally, presents, and then the movie, projected through a borrowed multimedia projector from a dvd on my laptop onto the wall.  The kids ate hot buttered popcorn while lounging all over the living room floor with pillows.   When the movie ended, each child was given a light stick, which they took outside.  The light-sticks (purchased at a local hardware store on sale last summer) were a big hit-the children ran around the back yard in the dark. From inside the house it looked like giant lightning bugs were flying back and forth in the back yard, since all you could see was the lightsticks!

This last burst of activity was just the needed ending to the party. The boys went home at 9:00 PM and the girls changed into pajamas for a little last story telling and giggling. By 10:00 almost everyone was asleep, except for the one child who got homesick and invented a tummy ache.  At 11:00 mom and dad picked her up, but every other child was sleeping by then.

In the morning, I requested each parent pick up their child by 9:00. This kept breakfast simple by necessity, and the kids went home early enough for mom to be able to sit, sip some coffee and take down streamers.  When the roll of film is developed, each thank you card for presents will be accompanied by the child's handmade picture frame and the picture I took of the child and their 'walk of fame' poster-board star creation, which they were also allowed to keep.  The party was by far the most successful kids' party we've had to date, and was extremely inexpensive. 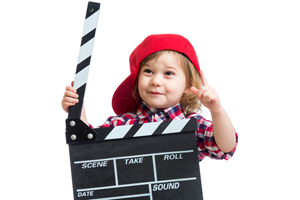