For my daughter's 4th birthday, she wanted a Princess Ball. The hard part was she wanted to invite 6 boys??? I immediately went to the internet and begin searching for ideas. When I came across BirthdayPartyIdeas.com, I hit gold and my mind went to racing.

First, I used the idea of making the invitations from the scroll paper. I actually bought ivory colored resume paper at Wal-Mart and it was perfect. I tried to include my daughter in all the party planning, since it was HER party. We found a scroll design on Print Shop and enlarged it to paper size. Then we added text: Hear Ye, Hear Ye,By order of the King and Queen: Prince(ss) (guest) is cordially invited to the (your name) castle to celebrate Princess Kaleigh's 4th birthday! The royal celebration will begin at 6:00pm in the evening on (date).The queen asked that you come dressed as your favorite prince(ss) in your most royal attire upon your carriage's arrival, princesses will be greeted with royal crowns and gems. Princes will be given royal swords for bravery. The royal cook has prepared a feast of goodies for the celebration..there shall also be festivities including a royal ball, games, crafts and fun for all the excitement will heighten during the defeat of the dragon pinata..and the arrival of the royal horsemen Have your carriage arrive for you at 8:00pm when the celebration concludes. Please RSVP with the Queen Mom if you plan to attend this royal gala The castle needs to plan for your arrival. This is a magical celebration not to be missed! Then we rolled them up and put "our seal" on them. I looked for initial stickers, like from stationary but while I was in Hallmark I remembered the seals they give you when you buy a card. They're CROWNS!!!I thought that was perfect and hey! They're free! It doesn't get any better than that. So we had 3 invitations that had to be mailed (the rest we hand-delivered) so we went to the trusty UPS store. They have little tubes for $1.50 and mailed them for us for about the same.

Then we started picking out crafts and games and planning for out BIG event the arrival of the horseman (Ponies-like they have at the fair and circus) We found some not too far away from us and scheduled them for the night. (They did not get to come because of the RAIN, but it is a great themed idea-Cinderella) We tried to find something from each Princess. For Belle, we made magical mirrors. We took the mirrors out of the Purse Favor Bags (they are GREAT!) and bought seed beads at Hobby Lobby. For Aurora, we made the pink (foam) cone hats wrapped with gold wire and  sheer material coming out the top. Both ideas came from a Disney Craft book I bought many years ago. For Jasmine, we played the Magic Carpet Relay. This is cheap! And it was their favorite!!! And for Snow White we played Pass the Poison Apple (like Hot Potato). Everyone loved our enchanted castle. I bought some cobblestone corrugated paper and purple star paper from Birthdayz by Shindigz and made a simple but elegant castle. A friend and I  cut a simple rectangle, made a door and two windows. The corrugated paper stands on its own and with the star paper we added layers around the top. Added a gold crown (poster board) that said Kaleigh's castle and it was done. This was of course the highlight of the night. I put out the "red carpet" (2 rolls of red wrapping paper) and we took pictures (polaroid) in front of it. We had one of the Princesses' older brother to "announce" them as they went down the red carpet. "Introducing Prince(ss) (guest)…" the parents loved this and started snapping pictures too! Then I let them play in the castle, they would have been fine with just that all night. The star paper really goes along way, I used it for banners on the windows and the prince's tablecloth. I bought Princess Balloons at Hobby Lobby and had one on each chair and several on the birthday girl's "throne" (Princess chair from Wal-Mart). I covered the middle of the ceiling with silver balloons (with extra long curling ribbon). This added to the red carpet to make them feel like "royalty". I also had the Princesses cut-outs and banner hanging behind the castle.

For the food, we also had something from each princess. I have always made my daughter's birthday cakes. The simple character cakes, but this year she wants ALL the princesses. I started looking through my cake decorating books, I found a Disney Party Planning Book that I had completely forgot about. It had a castle cake! Very simple, but one suggestion: make it where the party will  be so that you don't have to try and transport the cake when it is done. It was a loaf pan on each end with a 9 inch round cut in half and sandwiched together in the middle. With chocolate towers on each end and blue gel underneath for the water and green coconut for the grass. I FINALLY found some minature princess dolls on clearance at Toys R US (Fisher-Price)and I put these around the castle. No one could believe I made it! This book also had Frosty Pumpkins, this would work better NOT in the summer, but the kids didn't care. I took a large ice cream scoop and scooped out "Orange" sherbet onto wax paper. Before serving, add half of a "chocolate straw". They were cute but melted almost before they hit the pan. (this is in MS -100 degrees and 100% humidity) We also had Pizza Diamonds (Pizza Rolls), Ariel's Fruit and Cheese Septors (a BIG hit with the kids) layer cheese cubes and grapes on frilly toothpicks and put crackers around. Snow White's Jello Jewels (Jigglers cut with diamond cookie cutter), Carriage of Chips and Dip (this was a scooped out Cantalope (again, this was June, it would be perfect with a pumpkin in the fall) that I filled with French Onion Dip. I added cucumber wheels on a bed of lettuce. It was really cute! Auorora's Sandwich and Cookie Wands. This was PB&J on star cutout bread with a carrot stick and the cookies were star shaped sugar cookies on sticks wrapped in curling ribbon.

Princess Jasmine's Dessert Pizza is a sugar cookie with cream cheese,sugar and lemon juice icing, topped with fruit of your choice. I used strawberries, bananas and peaches. Even the adults love this!!! And last we had Belle's lemonade. I found a cute idea for this but it was too late to use it. Use a rubber boot protector and fold up the heel, freeze and unmold for a cinderella slipper. We made personalized placemats with this menu on it. I placed it under each child's plate and they got to order like they were in a resturant. The place setting was (for the girls) the princess ball plates, solid pink or yellow napkins, clear silverware that we glued jewels to the handles of, and a princess goblet.  I also ordered little crystal slippers to add to the table. The boys had the Knight themed package for PartyExpress. I put solid blue napkins and the clear jeweled silverware and yellow goblets. (These were the hardest thing to find-I looked in 3 states for plain goblets-finally found them in Flordia at a Old Time Pottery store)The kids loved drinking out of these! I ordered the Knight favor boxes for them and they were perfect. I took out the dragons and knights and decorated the table with them then at the end they took them home. PartyExpress has the best party favors I have seen, I usually make my own, but you could not beat these with what you get for the price. The boys got to slay the dragon pinata to save the princesses. Of course, the princesses wanted to share in the candy afterwards.

I know this is a lot of info. but I wanted everyone to know these great ideas that I found and we had the best party ever! Thank you for all the ideas as well, it really help get me started. I was totally exhausted but the next morning when my little girl told me that The party was the best ever and that I was the best mommy in the world, it was all worth it!!! 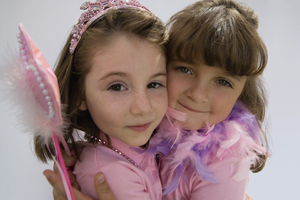