Raggedy Ann & Andy Dress Up Tea Party - 5 yr. old My daughter absolutely LOVES her Raggedy Ann doll so we felt this particular theme would be perfect for her 5th B-Day Party. Let me start off my saying that it was ABSOLUTELY ADORABLE!

About a month ago I bought Raggedy Ann Costumes for the girls & myself from the "Costume Cuzzins" on the internet.  We planned on inviting 3 of her cousins & having them dress up with us. I did a lot of research on the net & decided to add a few things I learned about Raggedy Ann on the invitations It read:  The history of the Raggedy Ann doll is very touching. She began as an old family rag doll:  An old toy, faded and worn, tossed into an attic. And there the legend goes,  A little girl named Marcella found her  One wet and rainy day . . .  . .  Please join us for a very special day  Where storybook dolls come alive  And enjoy magical adventures  When no mortals are present.  The girls were given their invitations with their costumes & they were all set for the party.

When the girls arrived I took individual Polaroid pictures of them that they could take home & they put on these hanging name tags I made for them with a Raggedy Ann picture & their Raggedy names such as "Raggedy Renee" & so on. They were immediately escorted to the kitchen table to get started on a coloring activity found on the back of their Raggedy Ann plate mats. Shortly thereafter, "Mary Poppins" arrived & began by telling the girls a brief history of the Raggedy Ann doll & read them a story about how Marcella first found Raggedy Ann in her Grandma's attic & became her favorite plaything.

After the story Mary Poppins began looking under the table, in the cabinets, pantry, etc. to see if she could find something really special just as Marcella had in the story. Sure enough she found my daughters little Raggedy Ann doll in one of the cabinets!!

The girls were all excited & this lead into the "Musical Raggedy Ann Game". It's sort of like the game "Hot Potato". She had "A spoon full of sugar" & other songs from the movie playing for this & the girl who was holding the doll when the music stopped got to have her face painted like Raggedy Ann. While the other girls waited to start the game again to have their faces painted, they worked on another activity. They made a Raggedy Ann face out of Rice Crispie treat balls, cherry pull string licorice for the hair, red licorice piece for the nose, chocolate chip morsels for the eyes & black licorice pieces (cut in tiny strips for the mouth).  These were TOO CUTE!

They continued working on these until all the girls had their faces painted. Also, each girls got to open their party favor gift. I wrapped their gifts in theme colored tissue paper & ribbons & put them in a cello bags with special gift tags with Raggedy Anns picture & their "raggedy name" on it.  It looked like an Easter basket in a way. In it they found their very own Raggedy Ann Doll to love & treasure (from raggedyannland.com)& Raggedy Ann favor boxes (from Birthday Express) & Raggedy Ann & Andy coloring pages I printed off the internet. After that Mary Poppins had a little magic show/tea party with the girls & talked to them about manners.

Next we had them go outside for the game of 'Limbo".  They all had the giggles as they watched each other run around in their costumes & mop caps. Then it was cake time!! The girls were instructed check the bottom of their cake plates for a Raggedy Ann sticker. Who ever had it won a Raggedy Ann prize! We made my daughter's Raggedy Ann cake from a recipe found on the internet.  It turned out beautifully! All of us including Mary Poppins sang Happy Birthday & she made all of the girls heart balloons before she left.

Next had potato sack races.  I had to incorporate Raggedy Ann into this game somehow so I printed large signs, one of Raggedy Ann & the other of Raggedy Andy & taped them to the front of 2 folding chairs outside. Then I used those same pictures & shrunk them down & put them in hanging name badge holders.  I divided the girls into two teams "Team Raggedy Ann" & "Team Raggedy Andy".  The object was to have the girls hop to their designated chair & take the team badge off & leave it on the chair, hop back, then the next girl in line had to hop to the chair & put on the badge & hop back. Which ever team hopped back first with their name badge on won a Raggedy Ann prize!(I found several cute prizes at Little Annie's Attic.com such as a heart shaped tin, beanie raggedies, tea sets, books, etc.)!!!  This game was a hit!!

Even though I was out of prizes after their 5th or 6th round, they still wanted to continue playing just because it was so much fun. After they were all done we went back inside & had Present Time!  Then they sat around the living room table that I covered with a plastic gingham table cloth to do an art project that I made my own stuff. I bought them little tote bags from Hobby Lobby, I pre-cut all the felt material in Raggedy Ann colors to make the body, arms, dress, eyes, mouth, etc. I even pre-cut some a little differently to make Raggedy Andy tote bags. The girls really got into using the red yarn for hair & the younger girls had fun figuring out where all the parts went (sort of like a puzzle). I pre-made a tote bags so they could use it as a guide. The bags came out really cute & they used it to take all of their prizes & gifts home.

We left them on the table to dry & went back outside for Piñata Time! I found one that resembled Raggedy Ann in a way, it was a girl clown with red hair, a party hat & an apron dress, I also put a Raggedy Ann sticker on the blind fold it came with. I bought little red paper bags & put special labels I made (once again, with Raggedy Ann's picture & their "Raggedy Names" on it) & passed them out after the piñata broke.  They were so happy to have their own special bags with their name on it so they wouldn't get them mixed up.

Last but now least, we went back inside to do another project. I found a really cute idea on the internet of making toilet/paper towel roll dolls. I printed out the directions & templates days before & made a sample one for them.  They loved everything from their party favors to all the little details & personal touches.  They felt really special.

Before this party they never really knew Raggedy Ann or gave her much thought (except for my daughter of course, she's always known)& now I'm sure they will cherish Raggedy Ann in their hearts forever.

As they left I handed them their Polaroid picture & a thank you card that read:  We’ve played a lot together, Raggedy Ann, As playmates often do I always shared my dreams  With no one else but you.    Each night my prayers were whispered  As I snuggled with you by my side  On stormy nights, the thunder  Made us cover up and hide.   Now your eyes have both grown weary  And your arm is slightly torn,  Your cuddly body is tattered  And your nose is mashed and worn.   We did so much together, Raggedy Ann  The years, Oh how they flew  And I cherish every memory  Of growing up with you.   Author Unknown 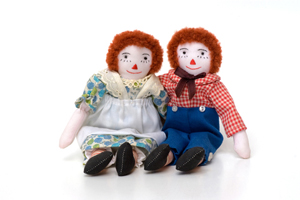