My son, who just celebrated his fourth birthday, is a Rescue Hero fanatic!  So this obviously had to be the theme of his party.  Once I started looking though, I was unable to find any themed party ware and few goodies.  So my husband and I, with the help of some other ideas from this website, put together a fun time.

Here's what we did....I began by creating the invitation on the computer.  I made it a "recruitment" poster inviting the guests to try out for the rescue hero team.  I integrated graphics of various characters I "borrowed" from the internet, and used phrases like "command center" and "time of mission" to make it sound official.

For decorations, I took the Rescue Hero symbol and blew it up with an overhead projector to make two signs.  We used these to direct guests to our house, and over the table to make it like command central.  I then used red, white and yellow (thier colors) to decorate with streamers and balloons.  The cups, plates, napkins, table cloth and silverware all continued this color scheme.

The cake was round with the symbol on top.  On their web site, Fisher Price gives you some birthday ideas.  The cake was one of thier suggestions and I was pleased with it.  They also provide name tags which I printed out on sticky paper and then cut out.  These were also very cute!  I wrote each guests name on it, and passed these out as they arrived to the party.  Each guest was asked to dress as thier favorite rescue hero = this was a hoot!  My son chose to be Billy Blazes, so we simply put him in a firefighter costume.  Then my husband and I dressed as Gil Gripper and Sandy Beach, respectively.

Some of the other guests arrived as Matt Medic, Ben Choppin, and Bill Barker!  For the games we chose three - all of which worked on a team concept.  The Rescue Heroes really promote this, so I wanted to do the same!  Plus, it alleviated giving prizes and having losers.  All of the games were a big hit.  Each was billed as a training mission, and the team received a sticker for their name tag when they succeeded.  The kids loved this.  Three stickers equaled a new Rescue Hero!  We even had a little graduation ceremony at the end of the party - complete with pictures and a diploma.  (I then sent these photos in the thank you notes.)

The first game was based on Jake Justice (the police).  The kids had a pile of handcuffs - one for each guest - and they had to stand in a line and pass the handcuffs down the line to the last person who then tossed them into a big bucket that was made to look like a bank robber.

The second game was based on Roger Houston (astronaut).  We blew up several balloons and pretended they were meteors.  The object was to keep the meteors from hitting Earth - the floor.  We played the Rescue Hero theme song for about one minute as the goal.  This was very amusing to watch, and they loved it.  We did this game several times.

The last game was also hysterical to watch!  It was based on Billy Blazes (firefighter).  Before the party, in one of our bedrooms, I blackened all the windows out to make it very dark.  Then I hid 25 plastic animals.  The kids donned fire hats, mouth masks and each received a little flashlight.  They crawled in (we discussed fire safety first) and together they found all of the animals to make a rescue.

For the goodie bags, I gave the kids the handcuffs, flashlight, fire hat, and a Rescue Hero coloring book.  All of these were purchased at a dollar store so this was pretty inexpensive.  We also set up all of my son's Rescue Hero toys and the kids enjoyed playing with these immensely.  They did this as the guests arrived and left, but I think they could have done it the whole time!  It certainly was a party he'll never forget! 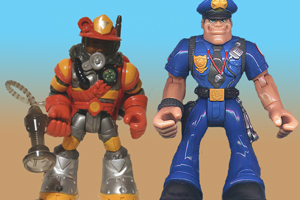