Wild, Wild West Pony Party.  For our daughter's 5th birthday, she wanted some type of a pony party.  We thought having a wild west theme would be fun for all the children, boys and girls alike.

I made her invites out of old looking brown paper, we copied a picture of her dressed up like a cowgirl and printed on it was "WANTED (picture) Cowpokes and cowgirls to help celebrate (child's name) 5th birthday.  Time of Meetin': Meetin' Place: and then it said Give us a holler at (phone number) to say that your coming for a rootin' tootin' good time!"  We then crumpled the paper up, and then burned the edges to make it even older looking.

I got so many compliments on this.  At the party, which was a barn with hay bales stacked around for children to sit on, we gave all the children cowboy hats to wear.  Our first game we played was "cowboy, cowboy, sheriff" played just like "duck, duck, goose"  It was like an ice breaker for the children to get in the mood for a good time.  We then proceeded to have a haystack hunt, hidden in the hay was plastic snakes, tiny plastic horses as well as chocolate gold coins.  Each child had to find a certain amount of each before they could go on to the horse ride.

We then had a horse ride for all the children who came, while the children were waiting we had two bales of hay set up.  One had a saddle on it, and the other a steer head.  We used a hula-hoop with a rope attached to it so the children could rope a steer.

After the pony ride, we played "stomp the flies", as that is what horses do to get rid of pesky flies, they stamp their feet.  We tied black balloons around each child's ankles and had them run around trying to stomp other children's balloons.  This was a blast to watch, and I feel that the children had the best time with this activity.

We then had cake and ice cream.  The cake had Spirit on it with icing colors of red, white and blue, which were the same colors I used for streamers and other decorations.  We then had the birthday girl open presents.  All the children sat in a circle, holding the present that he/she brought.  While country/western music was playing they passed the presents around (like hot potato)  when the music stopped, whatever present the birthday girl was holding was the one she got to open.  A lot simpler for all the children as we all know it gets crazy at present time!  It keeps all the children occupied, and a sense of participation as well.

After the presents were unwrapped, the children got to brush the horse and I gave each of the children a parting gift of a harmonica, so they can play their lonely cowboy tunes when they are out on the range. 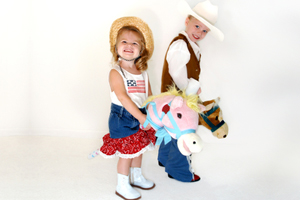