For my daughters 13th birthday party this past April she wanted a black light party. I took it a step further and turned it into a black light/scavenger party. The invitations I found at Wal-Mart and were already black light and neon looking.   I found the black lights, glow in the dark necklaces, bracelets, sunglasses and some black velvet coloring posters at the local dollar store.  A few days before the party I went to the local Blockbusters and explained that a day before the party I wanted to leave a 9 X 12 manila envelope with glow in the dark sunglasses, a Blockbuster gift card for 2 free movies, and a clue to the next place.  The manager couldn't wait, and was even glad to find out that he would be at the store the night the girls came in, (and pretending that there wasn't an envelope there!)

Next I went to our super Wal-Mart and purchased a $20 gift card that was for snacks. Then I went to the jewelry counter and explained the same thing, only this envelope would have bracelets, the gift card and another clue. As luck would have it, the same person I spoke with here about my plans would be there the night of the party, again, feigning ignorance about a package.

The last place I went to was Domino's pizza. I purchased a gift certificate for the price of 5 large pizzas, and then spoke to the manager/owner about my plans, this time with an envelope containing the necklaces, gift certificate and the last clue (leading to home). He couldn't wait!  The night before the party I put my envelopes together and dropped them off. I bought a twin size navy blue flat sheet from Wal-Mart and some neon spray paint. I sprayed some graffiti on it and hung it in the dining room as a backdrop.

We replaced every single light bulb in the living room, hallway, kitchen and dining room with black lights and even had some longer, florescent type black light bulbs put at strategic points. My son had a disco ball so we hung that up, and hooked up our color-changing fog machine (way cool to see this eerie, glow in the dark mist floating around!!). Also hung around were the black velvet posters left uncolored so that the white would pop out under the black lights. The tables were covered in dark navy table clothes so that they wouldn't be seen, and I used white plates, napkins, neon straws that glowed in the dark, and silverware. The cups were glow in the dark plastic cups bought at Oriental Trading Company last Halloween that worked perfectly with my theme.

Note: Mountain Dew glows in the dark! The cake was unique. I went to our local Publix bakery and had them make a simple white icing sheet cake and had only my daughters first name written in very thick, dark navy blue icing (it showed up beautifully-like it popped out in 3-D).  After the girls had all arrived, I handed them a puzzle to figure out. It told them that they were going on a treasure hunt and had to figure out the clues. Before they could begin, they had to figure out the toughest clue, which was where to begin their search. Once it was discovered that Blockbuster held the first clue they ran to the van. As the girls went to each place to collect their clues, they had to put on the stuff that was inside the envelopes.

Once home we ate and I just let them be. I had no games planned as 13 year olds think they're too old for that. Besides, the treasure hunt took up a good hour and once we got home, ate, sang happy birthday and opened presents, the girls settled down to watch their movies. About mid way into the movies I snuck into the living room and threw in about 4 dozen small sized GITD sticks into the middle of the room. The girls looked like sharks at a feeding frenzy, grabbing them up and sticking them in their hair  what a sight!

On the invitations the girls were instructed to bring a flashlight. I bought about 5 good sized bags of candy and put it in a bucket. Once it was good and dark, I took the girls outside and had them get into a giant circle until their hands barely touched (we had about 11 girls). I told them to take 5 BIG steps backwards, and then turn around with their backs to the inside of the circle. Each girl had a bag, and with their flashlights on, I threw the candy into the grass and they had to find the candy the best way they could.

Some decided not to bother with the flashlights, but find the candy in the dark. What a sight! Later, they played flashlight tag until I had to tell them to come in at 11pm so my neighbors wouldn't complain.  The next morning they had cereal, donuts, grapes, orange juice and milk. Not only did they get to keep their GITD stuff, but I had 11 different bags of all sizes with no two being alike. All had 3 small gifts, candy, bubbles, lip gloss and nail polish. The girls all talked about this party for weeks to come and are looking forward to the next one. 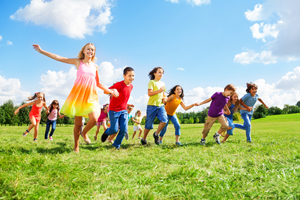