My son wanted a scientist birthday party for his 6th birthday and he wanted to invite his entire Kindergarten class (and a few other close friends).  I was a little nervous since I had let my older son invite his entire Kindergarten class the previous year and it was pretty chaotic.  Also, it was February (winter) in Wisconsin, so going outside wasn't an option and our house isn't very large.  We ended up having 12 kids between the ages of 5-7 attend.  So, I created my birthday party philosophy - the birthday party isn't a playdate.  (That many kids running around my house, not my idea of fun.)  The party is a time to do fun things (activites/games) with everyone invited that's centered around the theme and it should be less expensive than it would cost to go somewhere for the party.

INVITATIONS - I found a clipart of a scientist with white hair and a lab coat.  I glued googly eyes on him and then used punches to make it look like he was holding a beaker.  Then, I put some hair gel and blue food coloring into a small baggy and taped that behind the punched out image to make it look like there was something cool in the beaker.  The inside of the invitation just had the necessary birthday information.  Everyone loved the invitation and commented on them.

DECORATIONS - I found some science images from our local teacher store (meant for a bulletin board) and taped those to the outside of the door.  I like to decorate the front door so everyone knows they are at the correct house.  Then, my son's room had the cool stuff.  I borrowed some blacklights from some friends and in there we had a tornado tube, water fountain and cartesian diver all glow in the dark and even the water was glow in the dark using glow liquid from stevespanglerscience.com.  It was so cool.  All of the kids took their parents into the room as they picked them up so they could show them.

ACTIVITIES/GAMES - We did 6 experiments.  The order of the party was first 5 experiments, cake, presents, final experiment.  All of the ideas and items were from stevespanglerscience.com, so I won't keep mentioning where I found the ideas. As the kids were arriving, they could either go into my son's room and play with the glow in the dark stuff or they could go to the table and do some scratch art.  The paper was cut into bookmark shapes.  Most of the kids had never seen this before and they were amazed at how the color would come through the paper.

Once everyone arrived, we started the party.  Their take home bags were just the colored paper bags with handles.  We had their names on them and they were on a desk in the living room.  So, after each experiment, they could put their items in their bags.

2.  Snow - I had purchased paper bowls.  My husband handed out the bowls and I went by and put a little scoop of the snow powder in each bowl.  I had also, ahead of time, found 12 test tubes.  (You can either purchase these or ask friends and family.  You may be amazed that you can find enough without needing to purchase these.  I did.)  I had these pre-filled with water.  The test tubes are approx. 2 oz. and that's how much water you needed for one scoop of the snow powder.  Then, I had the kids guess what would happen when you added the water to that little tiny bit of powder.  Then, we actually did add the water.  The kids were amazed at the snow it made.  While they were touching it and playing with it in the bowl, my husband and I quickly grabbed the test tubes and re-filled them with water.  Then we handed out another bowl and added a scoop of snow powder again.  Then, the kids added 3-5 drops of food coloring to the water in the test tubes and we made snow again.  The kids loved the colored snow.  Then we used snack size ziploc bags and just dumped the snow into the bags and the kids put their bags in their take home bags.

3.  Slime - I don't think a science party could be complete without slime.  I again had this pre-measured out.  I used little dixie cups and had the green solution measured in one cup and the clear liquid in another cup and then they each had a paper bowl and a popsicle stick (for a stirrer).  I had them swirl the dixie cups around and asked if it was liquid or if it was solid.  They all agreed it was liquid.  Then, I asked what they think would happen if they combined it all together.  Then, we combined them and I had them stir for one minute.  Then, they were able to spend a few minutes playing with the slime while my husband and I cleared away the cups.  We then put those in snack size ziplocs and they put them in their take home bags and went and washed their hands.

4.  Color changing milk - My husband passed out plastic dinner size plates with a lip on them and I went by and poured whole milk into it.  I told them to sit very still, because we wanted the bubbles to be gone.  (If any of them still had big bubbles, I had them gently pop them with their fingers.)  Then, they put 4-7 drops of food coloring in their milk.  Then I handed out q-tips to everyone and a few dixie cups of dawn dish soap.  We did the experiment and they were all amazed at how it worked.

5.  Float or sink - Then the kids got up from the tables and while they were doing this next experiment, my husband was changing the table cloths.  We had a big clear plastic bin filled with water up on the island with a lot of different items around it.  (Before the party, I had my kids find a whole lot of things that they wanted to experiment with.)  One at a time, the kids could come up, pick an item, we would all guess if it would float or sink and then we would test it out.  The 2 big surprises were the cotton ball (everyone thought it would float) and a bag of pinto beans (everyone thought it would sink).

6.  The last experiment we did was the kid friendly elephant's toothpaste.  (We did this experiment after cake and presents.)  I had purchased aluminum cake pans and I had the bottles pre-filled with hydrogen peroxide.  (TIP: the website says the hydrogen peroxide needs to be the kind from a beauty supply store, but I used the kind you can find in any store for first aid and it worked fine.)  Then, I let them add a few drops of food coloring to the hydrogen peroxide.  I then came by and added a squirt of dawn dish soap to everyone's bottle.  Then, I had the yeast pre-measured out in dixie cups.  Then, my husband and I each had a cup of hot water and measured out the appropriate amount of water in everyone's cup and they stirred it up with a popsicle stick until I said it was good.  Then, everyone put their funnels into the bottles (TIP:  borrow funnels from friends and you'll have enough) and when I counted to three we all poured the yeast into the bottle and pulled the funnel out.  The stuff just started oozing out of the bottle and it was quite the WOW.  The parents had arrived right as we were starting this experiment, so it received rave WOW's all around and was the perfect experiment to end the party with.

COSTUMES: I had 2 white button up shirts of my husband's, 2 pairs of science goggles and 2 test tubes filled with colored water.  One at a time, each party guest donned the shirt, science goggles and a test tube and had a picture taken with my son so we could include it in the thank you note.  Most of the pictures were taken either as everyone was arriving or during the cake.

CAKE:  The party was on a Saturday from 1:00-3:00, so everyone had already had lunch, so we just had cake and ice cream.  I had made a volcano cake using the barbie mold and used dry ice to make it look like it was smoking.  I frosted it with chocolate frosting and used red and yellow decorating sugar to look like lava.  I also put trick candles on the cake and most of the kids had never seen them before.  We decided that a scientist probably had to create those since it has to be a special science secret that makes them re-light.  I actually think the candles were a bigger hit than the dry ice.

FAVORS:  The kids got to take home their scratch art, lava lamps, snow and slime.  I also included a packet of alka-seltzer tablets and some candy.  I had also made a booklet with each of the experiments we had done and what they could do at home with them.  I also included some UV beads (again from stevespanglerscience.com) and added some ideas for how they could test the beads at home.  I had planned on doing the Mentos/Diet Coke as a finale, but we didn't need it.  We did a lot (especially for a 2 hour party) and I have heard from the kids and the parents how cool this party was.  I think the key was the amount of prepped stuff we did ahead of time.  I have also heard of the kids doing some of the experiments at home using the booklet I created.

This was my favorite party so far and it helped me think that parties at home are the way to go.  It didn't cost that much and the memories will last forever.  I even had one parent tell me that she has filed it away to use for her younger daughter's party when she's in Kindergarten.  That's the ultimate compliment. 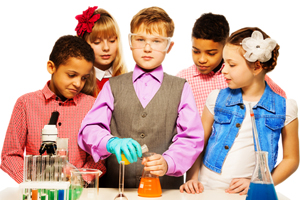