My son is obsessed with Scooby Doo and the Mystery Inc. kids, so it was a no-brainer on what the theme would be for his party! Thank you to everyone who contributed ideas on this website because I took a few from here and there to create . . .Three weeks before the party, I sent out an eVite to Save the Date, then two weeks before the party, I sent out

INVITATIONS: On groovy paper, I wrote: Zoinks! Zachary's turning 5! Near the beach, where it can be dark and damp There's a mystery to be solved at the (last name) Camp. We invite you to help us collect all the clues, So make sure you wear your running shoes. There will be Food & Games & clues that Rhyme, And with Scooby's help we'll have a really rood rime!  When: Saturday, February 9th, WHERE: The (last name) Camp, (location), TIME: 3 pm to 5 pm (outdoor movie to follow), Rsvp (enter info here), For the outdoor movie, please dress warmly and bring blankets to sit on! On the outside of the envelope, I wrote beside each child's name: Calling all meddling kids.

DECORATIONS: I bought cheap, white t-shirts for my kids, along with printable iron-on transfers and wrote: Zoinks! It's Zachary's 5th Birthday, along with a clip art of Scooby & the Gang. Then, I made a Sign-In board with Scooby clip art and placed it outside near the snacks. We had Scooby balloons all over the back yard, along with other signs that said: Zoinks! Zachary is 5! Jeepers, Watch Out for Creepers! Meddling Kids Beware! Scooby Snacks (and a list of all of our foods).I then decorated my mini-van like the Mystery Machine with printable magnet sheets (found in Staples). I printed groovy flowers, the words: Mystery Machine, and other images. Then, cut them out, and put them all over the car (way easier than trying to paint boxes to make the Mystery Machine). We had CAUTION tape all over the front, side and back of our house, too! I found a 3-1/2 ft. stuffed Scooby on CraigsList.com for $5, so he greeted everyone at the door!

ENTERTAINMENT/LIVING ROOM: We played Scooby Doo DVDs in living room, along with a Scooby CD for backyard entertainment. We found a great Scooby Doo bounce house at JumpforFun.com, and had Scooby coloring pages for the kids to do when they arrived. I also had crayons for the kids in dog bowls (they loved that). Now my kids are eating their breakfasts out of plastic dog bowls!

We started that party by telling the kids that we were going to do things a little differently and open all the presents that they placed on the coffee table in the living room (I made a sign that said: Please Put Presents Here). However, when we all went inside (did I mention there were 35 kids), all the presents were gone! All was left was a ghost-shaped clue (I found die cut shapes at a local teaching store called LakeshoreLearning.com).

CLUE 1 was on the coffee table said: The presents are gone, not a card or bow left. Who do you think has caused this theft? Go to the Garage, If you would like your next clue & look near the nose of Scooby-doo. (We all ran to the garage, then we played Pin the Tag on Scooby Doo.

CLUE 2 was on corner of the game (winner gets to take it). It read: Are you ready for your next clue? I doubt you'll know just what to do. Walk to the side yard, this I think should not be very hard. You'll be grouped in teams and wrapped as a mummy. Choose a friend that is smart and not a dummy! We all ran to the side of the house where there was a small table set up with rolls of white crepe paper. Since we had so many kids, we had 8 teams of 3 children. They chose one child to be the mummy, and the other two wrapped them up. We took of pix of the mummies. Then, one of the kids figured out that the next clue would be under the table!

CLUE 3 read: My favorite song is the Monster Mash. I always play it at my birthday bash. Go to the backyard, dance and find a place for you. The last one standing might get the fourth clue. Then, we ran to the backyard, where there was a chair set up with a CD player and a CD of the Monster Mash. We played Musical Numbers, instead of Musical Chairs. Because we had so many kids, and I wanted this to go quickly, I gave every child a number from 1 thru 4. I turned around, played the song, then stopped the music and called out a number. If your number was called, I handed out Scooby Doo gummies and had the kids eat their treats and wait near the fence. We played until everyone had gummies. The kids got smart and looked under the chair with the CD player for the next clue!

CLUE 4 read: Help one another, you've made it this far. Soon you'll find who the true thieves are. You've all done so well that it's my belief, just a few more clues & you'll catch a thief. Scooby's lost his bone, it's plain to see, so quickly run to the big tree. The kids ran to the tree in our backyard and sat in a huge circle. I brought out a small stuffed Scooby and we played Scooby Doo Where Are You? The birthday boy stood up and closed his eyes, while Scooby was passed from child to child. When I said, STOP. The child with the Scooby said, Scooby Doo Where Are You and hid him behind his/her back. The birthday boy had three chances to figure out who had Scooby. If he figured it out, we would have stopped, but he didn't so he got to sit and the child who had Scooby got to close her eyes. We played until someone figured it out. Then, the kids found the next clue on the tree!

CLUE 5 read: With so many friends to help you out, you'll solve this mystery with out a doubt! Over and under the raven will fly, to the next clue which sits high in the sky. Up in the tree were three huge black garbage bags filled with white balloons with a ghost face (made with a magic marker - there were 40 balloons). The kids had to Stomp the Ghosts, then clean up the broken pieces. While they were cleaning up, one of the kids found the next clue on the bottom of the slide in our swing set.

CLUE 6 read: You've played many games and had lots of fun but as for clues, you are still lacking one. GO TO WHERE YOU PARK THE CAR,  I KNOW THE CREEPER CANT BE FAR. All the kids RAN (and I mean RAN) to the driveway where the mini-van (Mystery Machine) was parked. The sliding door was open and all you could see was pants and someone's back. My son ran up to the Creeper as he turned around (it was my husband in a mask) while my husband said And I would have gotten away with it if it weren't for you meddling kids!!! They loved it!!! We had all the kids take a pix in front of the Mystery Machine with the creeper for the Thank You card.

FAVORS. I bought white lunch bags and fed them thru my printer. I had a Scooby clip art and Thank You note printed on each with the child's name. I filled them with: a box of Scooby Mac-n-Cheese Scooby stickers and a Scooby CD (that I burned for each child). For the younger ones I found Scooby mini backpacks at the 99 cents store!

Every weekend in the summer we show movies on our front lawn. Since Zachary's birthday is in February he missed this. So we had his party from 3 till 5 pm and had a movie on the front lawn at 5:30. We rolled up the bounce house and made room for our movie. Everyone brought their own blankets jackets and chairs while we provided mini bags of popcorn and drinks. We showed a Scooby-Doo movie of course then said good-bye to our guests. It was a blast and the kids are still talking about it. My other two children want Scooby parties too! I hope I can think of a new mysteries!!!" 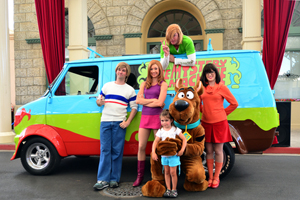