My son Nicholas had a difficult birth and was born with down syndrome and bilateral club feet on August 2, 2001.  After such a trying pregnancy and year full of doctor's appointments, Nicholas' first birthday deserved a special celebration.  Early on, Nicholas expressed an affinity for Sesame Street, especially the gravelly voiced Cookie Monster.  To this day, he sleeps with his Cookie Monster every night (he is now a year and a half).  Therefore, the Sesame Street theme was an obvious choice for us.

Fortunately, Nicholas' birthday fell on a weekend so we had his party on the actual day.  Of course, that day we lost power due to a bad thunderstorm.  So, I had to go to the grocery store to buy his cake.  The night before, my other son Jared, had the stomach flu.  But we were determined to give Nicholas the day he deserved.  The party was attended by about 20 adult family members and three children.  Those we could reach ahead of time, were advised to bring flashlights.

Fortunately, after the first couple of guests arrived, so did our power.  Since it was a rainy August day, we held the party in our screened in garage.  I purchased the Sesame Street party supplies from a local store.  But since there are not a lot of kids, I only purchased one pack of hats and blowers.  We don't put out a meal so I only buy one size plates.  Recognizing what really gets used helps keep our parties on budget.  But I buy the cups, napkins, and tablecloths to match.  I also bought the matching mylar ballons ahead of time and had them blown up at the grocery store -- which fortunately did not lose power.  Each child received a mylar balloon with the whole Sesame Street cast on it.

The games included: (1)  Coloring Contest:  in each child's invitation I included a Sesame Street picture to be colored ahead of time with instructions to bring it to the party to win a prize.  I usually do this for each of my child's birthday party and the prize is what else a coloring book and crayons.  I also made ribbons out of construction paper with a picture of Elmo on them to be displayed as a decoration during the party.  The ribbons say you're a winner!!!  Of course with one yearolds and three yearolds, everyone wins.

(3)  Ernie's Duckie Pond:  This was the biggest hit!!!  I bought inexpensive duck pond ducks and you had to draw for a winner.  Kids and water a crowd pleaser for sure.  Just make sure you have some towels handy.  Any large household bowl will do.  The prize was a small Ernie figure holding what else a rubber ducky.

(4)  Hand Elmo His Crayon:  I took an Elmo poster and put a white crayon shaped symbol in his hand.  I attached velcro and made different color crayons.  Give the child a crayon and have them "hand" it to Elmo.  I found that posters and coloring book colors are available for most any character.  It is easy to make your own verison of pin the tail on the donkey to follow your theme following this method.  The prize for this game was an Elmo figurine.

(5)  My favorite things on Sesame Street:  I took pictures of Oscar, Cookie Monster, Big Bird, and Elmo and laminated them.  Put them on a board.  Then laminated an item associated with each character -- garbage for Oscar, Cookies for Cookie Monster, Radar -- Big Bird's Teddy Bear for Big Bird, and a crayon for Elmo.  The children had to match the right character to their favorite thing.  The prize was an inexpensive Sesame Street book.

For decorations, I took my son's Sesame Street old box kite and cut off the large character pictures, made construction paper frames for them and laminated them and hung them around the room-- we had Oscar, Big Bird, Elmo, Cookie, Bert, Ernie, Zoe and more.  I also took the faces off of Sesame Street cookie packages and laminated them and hung them from the ceiling with ribbon.  I used a general Happy Birthday banner and attached laminated character faces, again from Sesame Street cookie products available in the local grocery store, on the sides.  We hung a Cookie Monster flag outside and I took a picture of the flag and scanned it into my computer to put on the front of our thank you notes in which I wrote "my friend, Cookie and I want to thank you."

For favors, I gave each child a Rock 'n' Roll Ernie Doll bought on clearance.  I always give adults favors too, because, let's face it, we are all Big Kids at Heart.  For the adults, I took a chocolate chip cookie receipe, typed it out and layed it out with a picture of cookie monster and made copies and cut them the size of recipe cards.  Then, I laminated the recipe card and attached it to a goodie bag full of whatelse?  Chocolate chip cookies.  I entitled the recipe card" Cookie Monster's Top Secret Chocolate Chip Cookie Receipe "then at the bottom, added" Revealed exclusively for Nicholas' first Birthday, August 2nd, 2002.

For additional entertainment, I setup a Playhut ball pit in our house.  This is a much cheaper option than renting one, and it folds up nicely so storage isn't a big deal.   So despite the power outage thunderstorm, we ended up with a Sunny Day, Chased the Clouds away and found our way to Sesame Street. 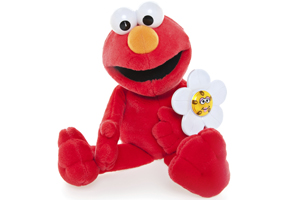