80's party for a 12 year old girl - I've been doing theme parties for my daughter since she was three years old, and I think we're up to the very last one, so we wanted to make it great!  She became interested in the 80's after hearing some music from that period, loving the "1985" song from Bowling for Soup that's played constantly on the radio, watching VH-1's "I Love the 80's" series and seeing the 80's-style clothes that are now in stores!

We began the party planning with the COSTUMES:  My daughter's wearing a black tank top and hot pink mesh shirt over it (both from Limited Too) with a short black skirt and black tights cut off at the knees.  She'll wear little white socks with black pumps (from Payless) and accessorize with TONS of jelly bracelets and pearl-like necklaces in black and hot pink (from Claire's) as well as lace gloves with the fingers cut off (also from Claire's).  Mom's costume came from ebay - it's a black prom-like dress, drop waisted with several layers of ruffles.  I'll also wear little white socks, black pumps, cut off gloves, jelly bracelets and pink pearl necklaces.  Dad's costume will be a Boy George lookalike from Funwirks.com.

INVITATIONS:  I burned a "get in the mood for the 80's" cd to be mailed out with the invitations.  It has 21 of MY favorite 80's tunes from Lauper, Madonna, Boy George, Romantics, B-52's, Go-Go's, Michael Jackson, Wham! And lots more.  The paper invitation I created on my computer using black, hot pink and lime green.  It states, "Like, omigod, we're having a totally awesome, totally 80's party!  Like, will we have a totally rad time?  Fer shure!  If you can't come, well, gag me with a spoon!  We'll party like it's 1985!  It'll be like, so gnarly, dude!"  Included in the invitation are suggestions for costumes (pink and black, mini skirts, shoes with little socks, off the shoulder sweatshirts, leg warmers, etc.  I also listed some movies that they might want to watch before coming to the party if they're interested in the 80's, such as "The Wedding Singer," "Breakfast Club," "Pretty in Pink," "Sixteen Candles" and "Ferris Bueller."  The CD and invitation were mailed out in CD mailers from sleevecity.com.

DECORATIONS:  Neon colors were hot in the 80's so our theme was hot pink, lime green with black as the accent. Tablecloths were black with hot pink and lime green plates, napkins and silverware.  Balloons were pink, green and black (neon balloons are hard to find - stumpsprom.com had them!)  I hung lots of streamers in those three colors as well.  I downloaded 16 pictures of famous 80's stars from the internet, enlarged them and mounted them on neon construction paper.  The stars included Madonna, Cyndi Lauper, Michael Jackson and many of the others mentioned in the song "1985."  I also printed out from the computer signs with 80's slang words such as "Awesome," "Radical," "Gnarly" "Gag Me With a Spoon," "Fer Shure" and "Grody" and mounted them on neon paper as well.

ACTIVITIES:  Once everyone arrived, we did hair and makeup.  I had TONS of styling gel and hairspray as well as a crimping iron to make the biggest hair possible.  We used bright colors for the makeup and I showed them that layering the eyeshadow into a "rainbow" effect was all the rage!  We played several games using the pictures hung on the walls.  Each girl received a booklet I made and photocopied to record her answers.  The first was to try to identify the 80's star.  Each picture on the wall had a number and a page in their booklet had the names of the stars.  They had to write the number next to the name that they thought matched.  We did a similar game with the 80's slang words.  A page in their book had the meaning of the word/phrase and they had to find the 80's slang that matched.  A third game was "Who Sang that 80's Tune?"  They had a list of 8 singers/groups - I played a bit of a song by one of the artists and they had to write down the number next to the person they thought sang that.  I used some "recognizable" names such as Madonna, Michael Jackson, Springsteen, etc.  Then we had a Rubix cube race to see if anyone could solve the puzzle (mini cubes were found at orientaltrading.com).  Of course, 80's music was playing throughout and there was lots of dancing!

CRAFT:  Each girl had a disposable camera to use throughout the party (great fun) and took it home to be developed.  The craft was decorating a mini photo album from orientaltrading.com.  I made a label for each album that said "Awesome Photos from Our Totally 80's Party!" with an "I LOVE THE 80's" logo on it.  They used foam stickers to decorate.

FOOD:  Lunch was simple and standard - pizza - but for the snack table I had 80's food in pink and green bowls on a black tablecloth with signs describing them. "1981 Skittles Comes to the USA", "1986 - Haribo Gummi Bears Come to the US", "1981 Juice Boxes are Invented," "1987 Snapple Beverages are Introduced," "1988 Cadbury Chocolate comes to the USA" "1986 Cheetos Hit the Market" and "1986 Pop Secret Appears on Store Shelves" (all information found on the internet).

TREAT BAGS:  I found neon handled bags at Michaels and printed out labels that said "Totally Awesome Treat Bag" with the I LOVE THE 80's logo.  Inside they placed their photo album, camera and Rubix cube.  I burned another CD of 80's music to include and I included some of the 80's food in snack sizes with little labels describing their relevance to the 80's - skittles, Cheetos, and Gummi Bears.  Like all of our parties before, this one was a blast! 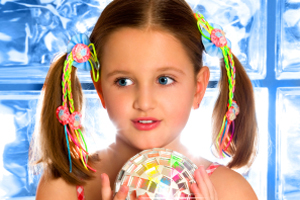