My daughter Madeline is in love with Snow White, so it was only appropriate to plan a Snow White birthday party for her 3rd birthday.  We had 60 guests and 25 little princes and princesses.  The party was in August and thankfully the weather was beautiful.  Invitations: I made the invitations using pictures from the storybook snow white.

Decorations: I had many snow white myler balloons as well as red, blue and yellow latex balloons placed throughout the house and deck.  I made tissue paper pom-poms in red, blue and yellow and hung from the lights above the island and also above the table.  I ordered a handmade banner that spelled happy birthday" that had snow white, a mirror, and a blue bird on it. I framed different pictures of Snow White the dwarfs and the evil queen with her mirror and placed them all around the house.  The cups napkins and plates also had Snow White's picture on them. I used red blue and yellow table cloths throughout.

Activities: I rented a red blue and yellow castle bounce house for the children (and adults!). I printed out coloring pages of Snow White and the 7 dwarfs and found crayons that were shaped as diamonds and gemstones. At the craft store I found wooden hand mirrors with a small crown on each one to keep to the theme of Mirror Mirror on the wall. I purchased one for each little girl and then personalized each of them with a tag that read "princess (then girls name). For the little gentlemen at the party I found wooden mirrors in the shape of a star.

Each little girl decorated her hand mirror with gemstones (from the dwarfs mine) and crystals. The little boys decorated their star shaped mirrors with foam glitter stars.  My husband has a front loader tractor and a trailer that he can tow with it. We filled the trailer with hay and I decorated the sides of the trailer with giant gem stones and a sign that read "dwarfs mine cart" We live on a large farm so my husband took all the kids and adults on a hay ride in the "mine cart" We also have a big pumpkin patch and since my daughters birthday is the end of Augthe pumpkins were near their peak so I made a sign on poster board that read "Cinderella's pumpkin patch" with a picture of cinderalla and a pumpkin coach. My husband drove the kids all around the patch as part of the ride.

Games: I ordered a 2 1/2 foot tall Snow White pinata filled with candy and princess crowns jewelry toys and trinkets.    Costumes: I had a seamstress make a sundress with snow white's face and my daughter's name embroidered on it. My husband wore a shirt that read "prince charming" and I had iron on decals for each of the 7 dwarfs that I placed on white shirts that were each worn by myself my daughter's 4 grandparents my sister and my brother in law for a total of 7! I ordered from Etsy a template to make masks for Snow white prince charming and each of the 7 dwarfs.  Each child picked out a mask and work it on the hay ride.  I ordered a Snow White costume and a family friend who is 21 years old dressed up as Snow White including the red bow in her black hair and full gown with bright red lipstick. She greeted each of the little girls and they were all able to have their picture taken with her.

Party snacks: I made a variety  of chocolate caramel and candy "poison apples." On etsy I ordered a template for wrappers to cover the hershey miniature chocolates.  There were 7 different wrappers for each of the 7 dwarfs and well as wrappers with the number 3 on it an apple and a red bow.  I had the rest of the food catered which included sandwiches and chicken variety of salads.

Cake: Due to the large number of guests, I made 2 cakes for her party. The first cake I used the Wilton doll mold.  I used yellow fondant to make the dress of the doll and the number 3. I decorated the body of the dress in butter cream icing to match Snow White's dress. I took a piece of red ribbon and tied it in the doll's black hair.  The second cake was a replica of the Snow white gown all done in fondant.  It was a 2 tier cake. The bottom tier was made of yellow fondant. The top tier was decorated in blue and red to match her gown and the top of the cake had a big red fondant bow.

Favors: In addition to their decorated mirrors and princess prizes from the pinata I purchased rock candy and ring pops for each child and attached a note to each bag that read "Gems from the dwarfs Diamond mine" Thank you for coming to my party. I felt the party was a huge success! I couldn't have asked for nicer weather and the children had a absolutely wonderful time!" 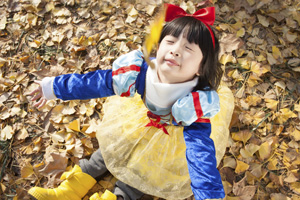